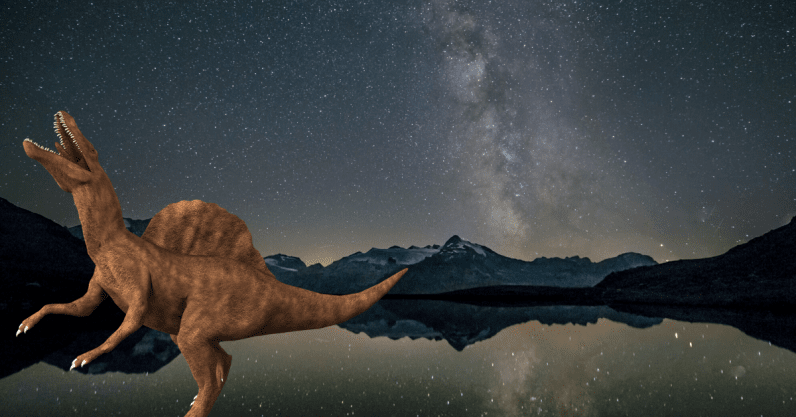 Around 66 million years ago, an asteroid larger than Mt. Everest ripped through the atmosphere of Earth, striking our planet at the Yucatán Peninsula, on the southeastern coast of Mexico. This event set off fires around the globe, and the dust kicked into the air blocked out the Sun over large portions of the world. Soon, the era of dinosaurs, which lasted 175 million years, was snuffed out.

Simulations show the impactor struck Earth at an angle around 60 degrees to the surface of Earth. Striking at this angle, the asteroid kicked up the greatest possible amount of dust, maximizing climate change, killing off the clade of animals, as well as 75 percent of other species on Earth.

The dust lifted into the atmosphere, including millions of tons of sulfur, blocked out the Sun, creating a “nuclear winter” worldwide.

“For the dinosaurs, the worst-case scenario is exactly what happened. The asteroid strike unleashed an incredible amount of climate-changing gases into the atmosphere, triggering a chain of events that led to the extinction of the dinosaurs. This was likely worsened by the fact that it struck at one of the deadliest possible angles,” said Professor Gareth Collins of Imperial’s Department of Earth Science and Engineering, lead researcher on the study.

A steep price to pay

Researchers developed the first-ever 3D computer simulations modeling the entire event from initial impact to the formation of the Chicxulub Crater which marks the spot where the asteroid hit Earth. The simulation examined the effects of an asteroid having a diameter of 17 kilometers (10.5 miles) traveling at 43,200 kilometers per hour (26,800 MPH).

The study found the asteroid came in from the northeast at a 60-degree angle, maximizing the amount of material thrown into the atmosphere. Following the impact, crustal material fell back into the initial crater, forming the geological feature we see today.

“We considered four impact trajectory angles, measured relative to the target surface: 90∘ (vertical), 60∘, 45∘ and 30∘. Simulations were performed at two impact speeds: 20 and 12 km/s. The slower speed was used for computational expediency and to afford direct comparison of the vertical impact case with previous 2D simulations. The higher impact speed is approximately the average speed that asteroids encounter Earth and is hence more representative of the likely impact speed of the Chicxulub impact,” researchers describe in an article announcing their findings, published in Nature Communications.

The Cretaceous–Paleogene (K–Pg) extinction event, also known as the Cretaceous–Tertiary (K–T) extinction, was first found to be the result of an asteroid strike when geologist Walter Alvarez found a thin layer of iridium around the world in the late 1970’s. This element is normally rare on Earth, but fairly common in asteroid, suggesting its extraterrestrial origin.

In the era leading up to the time of impact, massive volcanoes in the Deccan Traps in northwestern India were erupting, sending massive quantities of gas and dust into the atmosphere, greatly altering the climate of the planet.

Sulfur, and thanks for all the fish

Dinosaurs are extinct today because they lacked opposable thumbs and the brainpower to build a space program. ― Neil deGrasse Tyson

Geological examination of the Chicxulub Crater lent further evidence to findings made using the computer simulation. Central to this evidence was examination of a ring of mountains found inside the crater rim and dense, uplifted rock found 30 km (19 miles) beneath the surface of the crater. The simulation, when set to impact at 60 degrees, produced nearly identical features as those seen in the real world.

“Despite being buried beneath nearly a kilometre of sedimentary rocks, it is remarkable that geophysical data reveals so much about the crater structure — enough to describe the direction and angle of the impact,” Dr. Auriol Rae of the University of Freiburg stated.

The ground around the asteroid impact site is rich with water, as well as porous carbonate and evaporite rocks. The heat and diffusion of material would have sent massive quantities of water vapor, carbon dioxide, and sulfur into the atmosphere.

Once in the air, sulfur would form aerosols, minuscule particles capable of blocking sunlight, triggering the nuclear winter. A rapidly cooling climate and forest fires around the world, paired with the loss of photosynthesis feeding plants, resulted in the extinction of most of the life on Earth, researchers suggest.

Earlier studies only examined the earliest stages of the impact. This new study could help researchers better understand the nature of massive craters on other worlds.