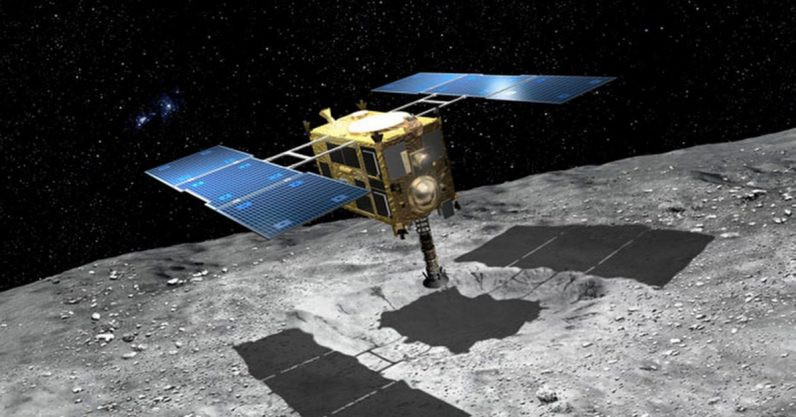 The Hayabusa2 probe has sent back stunning images of the surface of Ryugu, giving researchers an up-close look at the asteroid’s rocky surface.

February 21st, 2019, the Japanese space agency’s Hayabusa2 spacecraft touched down on the surface of the asteroid Ryugu — the orbit of which brings it between Earth and Mars — granting researchers at close-up look at the object’s rocky-surface. The images, released in a paper published in the journal Science, come as a precursor to samples that will be returned to the research team in December 2020.

The detailed observations promise to help astronomers better understand both the age and geological history of the body and grant insights into the material that formed the planets. Additionally, the coloration of dust grains disturbed by the landing hints at periods of rapid heating by the Sun during an orbital sweep that brought it close to our star. The discovery also has implications for the orbits of other asteroids in the solar system.

“Our results suggest that Ryugu underwent an orbital excursion near the Sun,” says Tomokatsu Morota, Nagoya University, Japan, and an author on the study. “This constrains the orbital transition processes of asteroids from the main belt to near-Earth orbit.”

The animation above was created from CAM-H and ONC-W1 data obtained during the 1st touchdown operation (Feb. 21, 2019).

The Hayabusa2 craft made its descent to the surface of Ryugu after months of careful operations to select a suitable landing site on the carbon-rich asteroid. The probe’s primary mission is to collect samples to be returned to Earth that Morota and his team can analyze, making it the first sample-return mission from a carbonaceous asteroid. The researchers also aim to learn what the effects of artificial impacts are upon the asteroid’s surface.

Despite the wait for the return of Hayabusa2 and these samples, Morota and his team can already tell much about the Ryugu from characteristics of the dust disturbed by the craft’s touchdown.

Observations of Ryugu conducted before the landing of Hayabusa2, launched by JAXA in 2014, indicated that it is composed of two different materials — one redder in hue, the other slightly bluer — observations that were confirmed upon the probe’s touchdown.

“Using the high-resolution images obtained in the touchdown operation, we found that a large amount of red, dark fine grains was lifted up from Ryugu’s surface by the Hayabusa2’s landing,” Morota tells me. “The red, dark fine grains were produced by solar heating, suggesting that Ryugu underwent an orbital excursion near the Sun.”

Morota continues by explaining that the variation in color is the result of some grains undergoing heating, whilst others did not. Morota explains, that he expects Hybuas2 to have collected both types of grain: “We found the large local variations in the spectra and albedo within the landing site, suggesting that both heated and unheated components were likely collected during the touchdown.”

The fact that Hybusa2 has collected both unheated and heated samples is vital to the objectives of Morota and his colleagues. “Ryugu is a primitive carbonaceous object containing hydrated minerals and organic molecules,” the researcher says. “We’re interested to see how such molecules change chemically as a result of solar heating.”

This type of information is only available from asteroids, which contain matter that most closely reflects the raw materials from which the planets of our solar system and others, formed. “In terrestrial planets, the primitive materials were once melted and we cannot access older information,” Morota says. “On the other hand, asteroids represent ancient material, surviving from the early solar system.

Morota and his team will also study Ryugu’s craters — which resulted from multiple impacts from other asteroids — in order to understand the tensile strength of the rocks from which it is formed. This will also give us clues as to the impact history of Ryugu and smaller bodies in both the main asteroid belt and in orbit around Earth.

Morota concludes by pointing out the wider implications of the research undertaken by his team.

“Revealing the chemical and dynamical evolution of asteroids is fundamental for understanding the origins of planets and life.”

Read next: No need to mourn the death of the third-party cookie