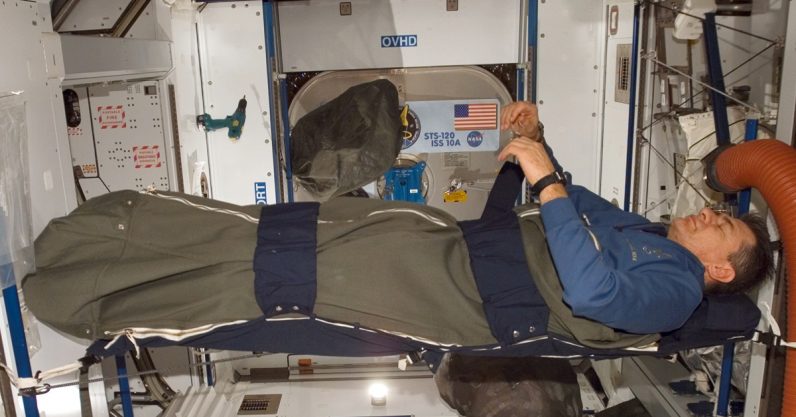 Sleeping is one of the best things in life. For most people, it is a time for relaxation, forgetting about problems, and having nice (or crazy) dreams. After a well-deserved eight hours, you should feel ready to start a new day.

Sleep is a very complex phenomenon, so much that you can get a PhD in it (believe me, I did). If you don’t sleep enough, it can can hurt your physical and mental health.

Some of the consequences of not getting enough sleep are:

We’ve seen that sleep restriction impacts cognitive function. Can you imagine how it would affect professionals that need to stay focused 24/7? That’s why astronauts must have good quality sleep while in space. Have you ever wondered how they do it? Here we’ll show you the curious ways astronauts manage to sleep in space.

They sleep in small individual cabins inside sleeping bags

When it’s time for sleep, you go to bed, right? Astronauts don’t have beds, although they have something similar — they use sleeping bags. Then, they attach themselves inside small individual cabins so they don’t float around and bump into the objects, possibly getting hurt.

The cabin also protects them from outside noises, environmental light, and, from being disturbed by their colleagues.

In the video below, NASA astronaut Suni Williams shows us around three nodes of the International Space Station, including the sleeping and hygiene quarters aboard the orbiting outpost.

They need to train their bodies to sync their sleep rhythms

Have you noticed that you tend to feel more awake during the day and more sleepy when night comes? Your body’s internal clock is to blame. It regulates the rhythms of your physiological activities, such as the time you eat and the time you go to sleep as well.

“Before humans ventured into space, many questioned whether sleep was possible at all in microgravity environments. It is now known that, in fact, space travelers can sleep once they leave the pull of the earth’s gravity, but that the sleep they do get is not completely refreshing and… the duration of sleep is shorter than that on earth and there is an increased incidence of disturbed sleep,” researchers wrote in a 2016 study, published in the journal Sleep Science.

This clock responds to external signals such as the light-dark cycle, synchronizing your internal rhythms to the natural cycle of 24 hours each day.

The video below shows how light is used aboard the International Space Station to help space travelers get better sleep.

Astronauts lose this reference. That’s why they must follow a strict schedule that includes sleeping and waking times, lighting instructions, diet, and exercise. These signals help maintain their sleep on track.

“Generally, astronauts are scheduled for eight hours of sleep at the end of each mission day. Like on Earth, though, they may wake up in the middle of their sleep period to use the toilet, or stay up late and look out the window. Different things such as excitement or motion sickness can disrupt an astronaut’s sleep pattern,” NASA explains.

Sleep hygiene is a simple measure that we can all take to train our brains to sleep better. If astronauts use these tricks, they may help you as well!

“Frequent sleep disturbances and daytime sleepiness are the most telling signs of poor sleep hygiene… Just a few simple changes can make the difference between a good night’s sleep and night spent tossing and turning,” the Sleep Foundation suggests.

People say, ‘I’m going to sleep now,’ as if it were nothing. But it’s really a bizarre activity. ‘For the next several hours, while the sun is gone, I’m going to become unconscious, temporarily losing command over everything I know and understand. When the sun returns, I will resume my life.’ — George Carlin

Despite all possible measures, evidence shows that astronauts’ sleep quality can still be impaired during flights. This could be due to several reasons, such as gravity, circadian rhythm disorders, stress, and exposure to light and sounds at bed time.

The challenge of managing fatigue and sleep loss during space missions has critical importance for the mental efficiency and safety of the crew and, ultimately, for the success of the mission itself.

This article was originally published on The Cosmic Companion by Dr. Ana Luiza Dias. She earned her Ph.D. in Psychobiology (Sleep Sciences) and is a specialist in Biotechnology from the Federal University of São Paulo, Brazil. She is passionate about science, nature, and biotechnology, and her goal is to impact people’s health and quality of life. You can read this original piece here.

Read next: Ethical hacking can be your ticket to six figures. Get the necessary skills for $39