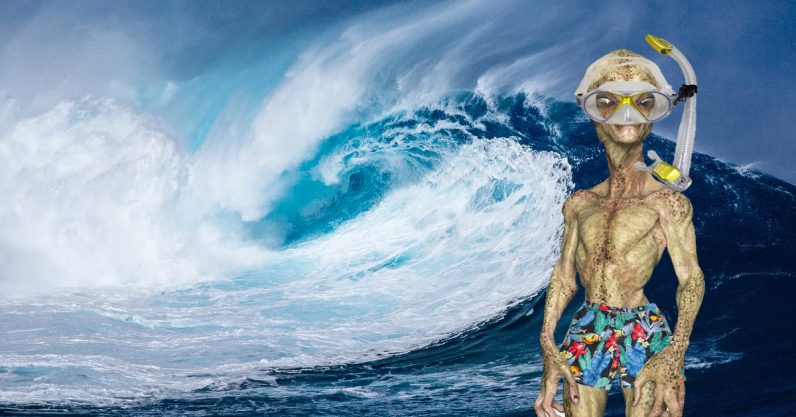 Exoplanets rich with water appear to be common around other stars. A new study examines conditions at the bottom of these massive seas in other worlds.

Alien oceans may be common throughout the Universe, but little is known about conditions deep underwater on massive worlds orbiting alien stars. A new study recreated these extreme conditions, with surprising results.

Neptune, at the edge of our own Solar System, is a perfect example of a massive, water-rich world. Astronomers believe such planets, where layers of water hundreds or thousands of miles deep surround rocky cores, are common around other stars.

The physical and chemical properties of these worlds are unlike anything seen on Earth — in nature. So, a new study recreated these extreme conditions present at the bottom of alien oceans in a laboratory.

“Studying the chemical reactions and processes is an essential step toward developing an understanding of these common planet types,” said Dan Shim, from Arizona State University (ASU)’s School of Earth and Space Exploration.

Diamonds are a lab’s best friend

The bottom of oceans on massive worlds are expected to show a clear separation between water and rock. Since water is less dense than rock, water should be found above the rock, as we see on Earth. However, extreme pressures in these environments could alter the behavior of these materials.

Arizona State University researchers set to work, aiming to re-create conditions on these massive, alien worlds. High-pressure diamond-anvil cells pressed on particles of silica immersed in water. These samples were then heated with the laser beams, reaching temperatures of thousands of degrees Fahrenheit.

While the sample was heated under extreme conditions, conditions were monitored by an X-ray detector. What they found was a weird amalgamation of silicon, hydrogen, and oxygen.

“He lost himself in the words and images conjured in his mind and for a while forgot… He found himself flying among stars and planets…” ― Carlos Ruiz Zafón, The Prince of Mist

One of the most intriguing properties of exoplanets is how water affects the climate of worlds. Vast quantities of water can affect the atmosphere of planets and deep beneath massive oceans, pressure builds to an extreme.

“Originally, it was thought that water and rock layers in water-rich planets were well-separated. But we discovered through our experiments a previously unknown reaction between water and silica and stability of a solid phase roughly in an intermediate composition. The distinction between water and rock appeared to be surprisingly ‘fuzzy’ at high pressure and high temperature,” Carole Nisr, Visiting Research Scientist at School of Earth and Space Exploration at Arizona State University, said.

Such findings could have significant implications in understanding the nature of massive oceans on alien worlds.

At the edge of solar systems, water worlds turn to ice giants, and astronomers are hot on the trail of these cold worlds.

“Silica and water have significant mutual solubility at high pressure and high temperature, forming new phases containing substantial amounts of both [hydrogen] and [silicon] in oxide forms. Therefore, the boundary between rock and ice layers may be ‘fuzzy’ at the deep interiors of water-rich planets,” researchers wrote in the Proceedings of the National Academy of Sciences.

This study reveals evidence for strange behavior taking place in extreme conditions on alien worlds. Understanding this odd phenomenon could help us better understand water-rich exoplanets. And learning about these aquatic environments could even help astronomers searching for life elsewhere in the Universe.

Read next: Daily Distraction: Become the next Picasso with these artistic tools