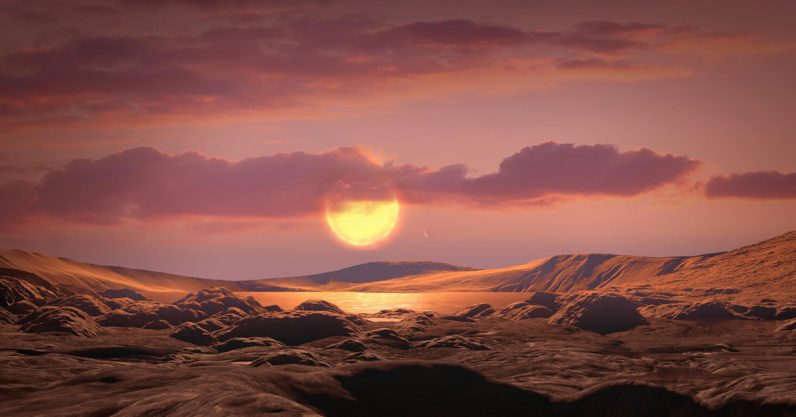 Meet exoplanet Kepler-1649c — it’s the same size as Earth, and its distance from its sun is just right for life — and that may NOT be a good thing.

Sitting roughly 300 light years from Earth, the exoplanet Kepler-1649c orbits a small, red star. Although this star does not give off much heat, the planet huddles close to it, like a camper close to an inadequate fire on a chilly night.

This close to its parent star, Kepler-1649c is in the habitable zone of its solar system, where bodies of water are more likely to form. With oceans, rivers and seas, the possibility of life arising on the alien world increases.

Kepler-1649c receives roughly three-quarters as much radiation as the Earth encounters in our own solar system. Temperatures on this exoplanet— as well as the types of radiation that would be received on its surface — would depend, in part, on any atmosphere and/or magnetic field of that distant exoplanet, about which little is known.

Kepler-1649c is just six percent larger than Earth, making it seem even a little more like our home planet.

“This intriguing, distant world gives us even greater hope that a second Earth lies among the stars, waiting to be found,” Thomas Zurbuchen, associate administrator of NASA’s Science Mission Directorate, stated.

Read: [This planetary system’s perfect rhythm tells us a lot about how it came to be]

But, the same proximity to the its star that brings warmth to this Earth-sized planet also brings a significant threat that could snuff out any life that ever developed on its alien surface.

Kepler-1649c was discovered hiding in previously-examined data from the Kepler spacecraft, which retired in 2018. An automated algorithm called Robovetter previously examined the data, searching for dips in the brightness of the stars. This dimming can be the result of a planet or could be the result of changes in the brightness of a star, or other objects passing “in front” of the star as seen from Earth.

Robovetter did not recognize the planet, marking dimming as a “false positive result” — data that resembled a planet, but was not confirmed as an alien world. Misses like this were anticipated, and the data is double-checked by the Kepler False Positive Working Group. When these researchers conducted a second look at the data for the Kepler 1649 system, they discovered the exoplanet whipping around its parent star once every 19 days, 12 hours.

Other exoplanets are known that are closer to Earth in size, including TRAPPIST-1f, or (possibly) Teegarden c. Worlds are known that have temperatures closer to those on Earth, including TRAPPIST-1d and TOI 700d. However, Kepler-1649c comes closer in both aspects together than any other planet known to astronomers — and it lies in the habitable zone of its solar system.

Kepler-1649c is not alone in its system — there is a second world, discovered previously, Kepler-1649b, just eight percent larger than Earth, and 28 percent more massive. This world, discovered in 2017, orbits its parent star at a distance just 1/20th that between the Sun and Earth.

“Out of all the mislabeled planets we’ve recovered, this one’s particularly exciting — not just because it’s in the habitable zone and Earth-size, but because of how it might interact with this neighboring planet,” said Andrew Vanderburg, a researcher at the University of Texas at Austin.

Signs of a Ghost Planet?

Strangely, the times it takes each planet to orbit their central star are connected. For every four times the newly-discovered outer planet orbits the star, Kepler-1649b completes exactly nine orbits, referred to in physics as a 9:4 (nine to four) resonance.

Such orbital resonances are seen in our own solar system, notably between some of the moons of Jupiter and Saturn.

However, these resonances are usually simple ratios, like 2:1 or 3:2. This leads to speculation that there may be an unknown world hiding between Kepler-1649b and c, merging a pair of 3:2 resonances into the 9:4 ratio seen between the worlds.

A size comparison of Earth and Kepler-1649c, which is just slightly larger.

“The reality is that we know that this universe, that our galaxy, has billions of stars. We know that stars have planets. So the likelihood that there is life somewhere else to me is just absolutely there.” — Mae Jemison

Red dwarf stars are common throughout the galaxy. These cool red stars do not give off much light or heat, but they can play host to powerful flareups that could wipe out any life on nearby planets.

Here on Earth, powerful solar eruptions could pose an existential threat to technological civilization. On a world as close to its star as these worlds are to their parent star, life itself could be wiped out in a flash any time it began to evolve in the world.

“This discovery highlights the value of human inspection of planet candidates even as automated techniques improve, and hints that terrestrial planets around mid to late M-dwarfs may be more common than those around more massive stars,” researchers wrote in an article published in The Astrophysical Journal Letters.

In the video above, an introduction to exoplanets, presented by National Geographic.

The next generation of observatories, including the TESS spacecraft, will discover and examine exoplanets like never before.

“The data gathered by missions like Kepler and our Transiting Exoplanet Survey Satellite (TESS) will continue to yield amazing discoveries as the science community refines its abilities to look for promising planets year after year,” Zurbuchen speculates.

Whether alien astronomers are sitting on Kepler-1649c, examining Earth and postulating on the possibility of life on our world remains another mystery altogether.

Read next: Connect with your remote team: A simple heart emoji goes a long way