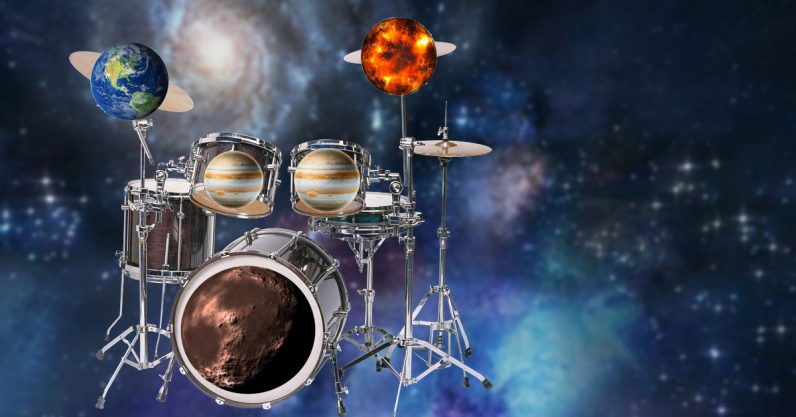 A planetary system of six exoplanets in near-perfect synchronization gives astronomers a hint at how such groupings could evolve.

Over a period of seven years, astronomers have observed the star HD 158259 — invisible to the naked eye — discovering six planets in orbit around it in near-perfect synchronization. The extrasolar planets (exoplanets) consist of one ‘Super-Earth’ and five ‘Mini-Neptunes’ with exceptionally regular spacing and timing. Their regimented order gives researchers a hint as to how the system may have formed.

The study, led by researchers from the University of Geneva (UNIGE), was conducted with the aid of the SOPHIE spectrograph and observations from the TESS space telescope and is published in the journal Astronomy & Astrophysics.

The team was able to determine that the planet closest to HD 158259 and the five outer planets have a mass ranging from two to six times the mass of the Earth respectively. The distance to the outermost planet from its parent star is just over two and a half times smaller than the distance between the Sun and its closest planet — Mercury — thus making the system incredibly compact.

The HD 158259 system is quite remarkable as of the hundreds of multi-planetary systems astronomers have discovered thus far, only a handful have consisted of six planets or more. Its most extraordinary feature, however, isn’t the number of incumbent planets, but rather the regularity and rhythm with which they occupy the system.

The planets in the HD 158259 are synchronized in such a way that in almost the same time that it takes the innermost planet to complete three orbits, the next planet out completes two orbits. Continuing the pattern, as this second planet completes three orbits the third is, in turn, almost completing its second.

The researchers describe this synchronicity with a resonance framework, a concept that plays a vital role in the understanding of the structure of planetary systems. Planets are described as being in resonance when they are in a periodically repeating configuration. The planets of HD 158259 are close to resonance, but not exactly.

“This is comparable to several musicians beating distinct rhythms, yet who beat at the same time at the beginning of each bar”, says Nathan C. Hara, also from UNIGE, member of the PlanetS institute and first author of the study.

The 3:2 resonance of HD 158259’s planets is more than an interesting quirk, however, by studying the system’s rhythm researchers can answer important questions about how it formed.

One of the most hotly debated aspects of planetary system formation is do the planets form in place or do they migrate into position after formation? The resonance of the planet’s in this particular system seems to support the migration theory.

“Several compact systems with several planets in, or close to resonances are known, such as TRAPPIST-1 or Kepler-80,” says Stephane Udry, also a professor at the Department of astronomy of the Faculty of Science at UNIGE. “Such systems are believed to form far from the star before migrating towards it. In this scenario, the resonances play a crucial part.”

It turns out that the fact that the planets “almost” complete an orbit as their leading neighbor completes its own orbit is actually very telling. It hints that the planets which are now slightly out of synchronization were once in perfect resonance. The breaking of the resonance could have been caused by the planets moving away from synchronicity in unison.

“Here, “about” is important. Besides the ubiquity of the 3:2 period ratio, this constitutes the originality of the system,” says Hara. “Furthermore, the current departure of the period ratios from 3:2 contains a wealth of information.

“In summary, the current state of the system gives us a window on its formation”

The UNIGE team used the same method to discover this system of planets that was employed by Michel Mayor and Didier Queloz to make the first discovery of an exoplanet orbiting a Sun-like star back in 1995 — a discovery that netted the duo the 2019 Nobel Prize in Physics.

Ironically, the study of the HD 158259 system wouldn’t have been possible in 1995, as the planets are too small to have been discerned by the technology available at the time. Such an investigation has only been made possible with recent developments in telescope technology.

“The discovery of this exceptional system has been made possible thanks to the acquisition of a great number of measurements, as well as a dramatic improvement of the instrument and of our signal processing techniques,” says François Bouchy, of UNIGE and coordinator of the observational program.

Paul A. Wilson, a researcher at the University of Warwick and another co-author on the paper, concludes by highlighting the important role smaller telescopes such as the SOPHIE spectrograph — installed at the Haute-Provence Observatory in 2006 — have to play in the future of astronomy: “This is great work and shows the important role smaller telescopes play in furthering the advances of astronomy through high-quality research using old, but well-funded observatories.”

This article was originally published on The Cosmic Companion by Robert Lea, a freelance science journalist from the UK, specializing in physics, astronomy, cosmology, quantum mechanics, and obscure comic books. You can read this original piece here.

Read next: Facebook’s political targeting machine should be cracked open by the DSA