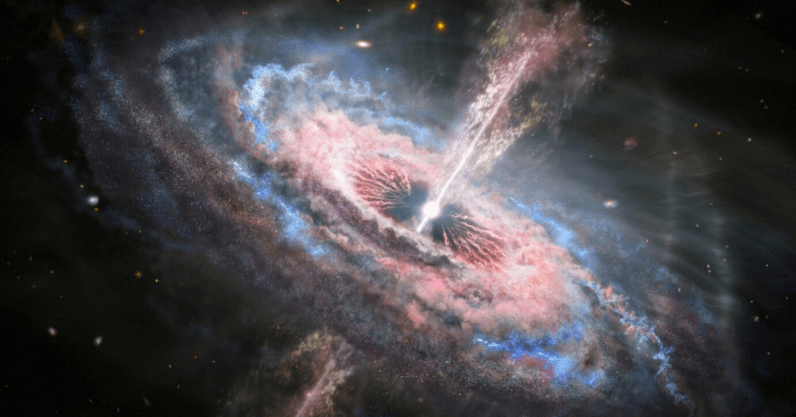 Quasar tsunamis discovered by astronomers using the Hubble Space Telescope erupt in the most energetic outflows of material ever seen. This outpouring of energy wrecks havoc with galaxies in which these enigmatic objects reside, altering the evolution of these families of stars.

Quasars are energetic cores of galaxies, composed of supermassive black holes fed by vast quantities of gas, stars, and planets. These bodies are capable of emitting a thousand times as much energy as the entire galaxies which host the bodies.

These quasar winds push material away from the center of the galaxy, accelerating gas and dust at speeds approaching a few percent of the speed of light. The pressure pushes aside material which could otherwise collapse to form new stars, making stellar formation more difficult, reducing the number of new stars formed. This new study shows this process is more widespread than previously believed, altering star formation throughout entire galaxies.

“These outflows are crucial for the understanding of galaxies’ formation. They are pushing hundreds of solar masses of material each year. The amount of mechanical energy that these outflows carry is up to several hundreds of times higher than the luminosity of the entire Milky Way galaxy,” Nahum Arav of Virginia Tech stated.

As the outflow blasts into interstellar material, it heats the medium to millions of degrees, setting the galaxy alight in X-rays. Energy pours out through the galaxy, producing a fireworks show for anyone capable of seeing it.

“You’ll get lots of radiation first in X-rays and gamma rays, and afterwards it will percolate to visible and infrared light. You’d get a huge light show, like Christmas trees all over the galaxy,” Arav explained.

Galaxies get blown away

I saw the whole universe laid out before me, a vast shining machine of indescribable beauty and complexity. Its design was too intricate for me to understand, and I knew I could never begin to grasp more than the smallest idea of its purpose. But I sensed that every part of it, from quark to quasar, was unique and — in some mysterious way — significant. — R. J. Anderson

This study could explain several mysteries in astronomy and cosmology, including why the size of galaxies is related to the mass of the supermassive black holes at their centers. It may also explain why so few massive galaxies are seen throughout the Cosmos.

“Both theoreticians and observers have known for decades that there is some physical process that shuts off star formation in massive galaxies, but the nature of that process has been a mystery. Putting the observed outflows into our simulations solves these outstanding problems in galactic evolution,” said Jeremiah Ostriker, a cosmologist at Columbia and Princeton universities not involved with this current study. Below is a 3D animation video of a quasar by the European Southern Observatory (ESO).

Outflows from quasars were studied by astronomers using the Cosmic Origins Spectrograph (COS) attached to the Hubble Space Telescope, the only instrument capable of carrying out the needed observations in ultraviolet wavelengths.

A second outflow measured by researchers on this study increased its speed from 69 million kilometers (43 million miles) per hour to 74 million KPH (46 million MPH) over a period of three years. Models suggest that such outflows should have been common in the early Universe. Researchers on this study believe this material will continue to accelerate for the foreseeable future.

Analysis of the data was published in the journal Astrophysical Journal Supplements.

Read next: Scientists are working on new ways to recycle chemicals from electronic waste