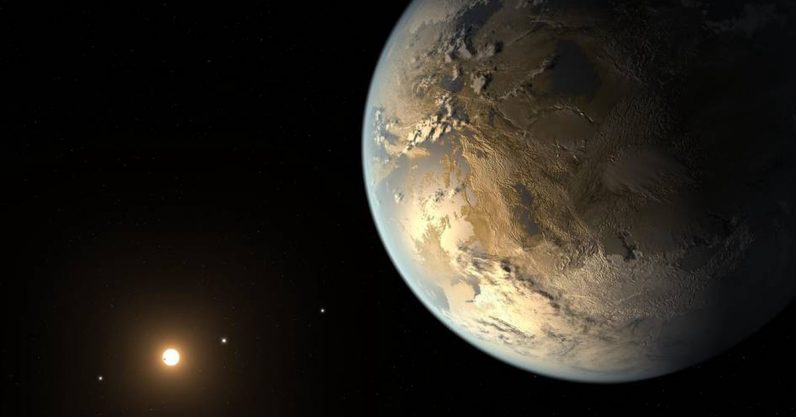 Originally discovered by the Kepler space telescope, G 9–40b has just been confirmed as an exoplanet by a team of Penn State researchers using the Habitable-zone Planet Finder (HPF) located in Texas.

This world, G 9–40b, is at least twice as large as Earth, and is likely significantly larger — possibly closer to the size of Neptune. It orbits its parent star just 100 light years from Earth once every five days and 17 hours at a distance of 5,760,000 km (5,580,000 miles), roughly 25 times closer than the distance between the Earth and Sun.

“G 9–40b is amongst the top twenty closest transiting planets known, which makes this discovery really exciting. Further, due to its large transit depth, G 9–40b is an excellent candidate exoplanet to study its atmospheric composition with future space telescopes,” said Guðmundur Stefánsson, a former PhD student at Penn State, currently at Princeton University.

This world was originally discovered by astronomers using the Kepler spacecraft in 2019, during the second segment of its mission, dubbed K2. The body was found as it passed “in front” of its star, as seen from Earth. This detection technique for exoplanets, known as the transit method, records the tiny dips in light output seen as planets pass between, and behind, its parent star as seen by Earth-bound astronomers.

However, there remained the possibility that the dips in electromagnetic energy recorded by Kepler were the result of a background star, rather than an exoplanet. This new study confirms G 9–40b is, in fact, a planet significantly larger than Earth, but smaller than Neptune (the next-largest planet in the Solar System after Earth). This new study reveals G 9–40b is roughly twice as large as Earth, and has less than 12 times as much mass as our homeworld.

At a distance of just 90 light-years from Earth, G 9–40b is the second-closest exoplanet ever found to Earth using the transit method of detection.

You need a hobby, seriously

The HPF, designed by a team of researchers from Penn State, is installed on the 10-meter Hobby-Eberly Telescope at McDonald Observatory in Texas. This instrument provides the most detailed measurements possible of low-mass stars near our own solar system.

“Using HPF, we are currently surveying the nearest low-mass stars — also called M-dwarfs, which are the most common stars in the galaxy — with the goal of discovering exoplanets in our stellar neighborhood,” said Suvrath Mahadevan, professor of astronomy and astrophysics at Penn State.

First delivered to the Hobby-Eberly Telescope in late 2017, the instrument began full science operations a year later. The HPF, designed to study worlds in the habitable zone surrounding their stars where temperatures allow water to poll on worlds with significant atmospheres.

Calibration of the spectra obtained by the instrument is calibrated using a new-generation laser frequency comb, a highly-precise tool to measure various wavelengths of light.

Findings of G 9–40b were confirmed by astronomers using the 3.5-meter telescope at Apache Point Observatory and the three-meter Shane Telescope at Lick Observatory. The NASA video below shows how the transit method is used to find and study exoplanets.

Using a technique devised by Stefánsson in his doctoral thesis, researchers at the Apache Point Observatory better defined the transit shape of the world — the light curve representing how much light is blocked by an exoplanet as it passes in front of its parent star.

High-contrast images taken at the Shane Telescope provided convincing evidence that the star G 9–40 is the source of electromagnetic radiation seen by Kepler and other astronomical telescopes.

This world is nearly ideally-suited for future studies using the James Webb Space Telescope due for launch in 2021, as well as the ARIEL and Extremely Large Telescopes (ELT).

Analysis of the data was published in The Astronomical Journal.

Read next: Here's how much Warren Buffett would've made buying Bitcoin instead of JP Morgan