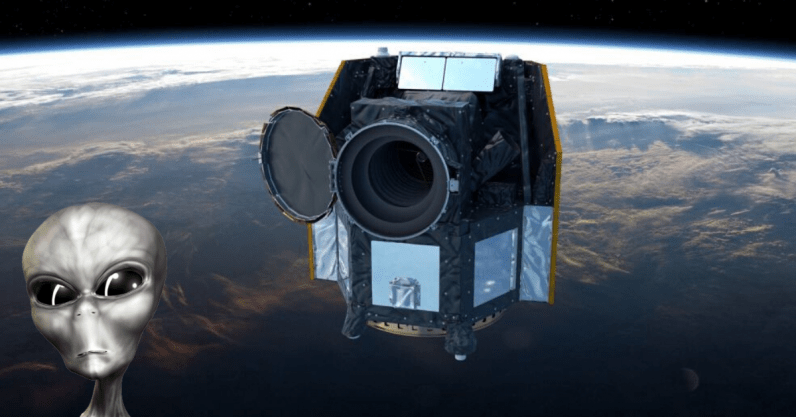 The CHEOPS (CHaracterising ExOPlanets Satellite) observatory, launched from French Guiana on December 18th, has just opened its electronic eyes to the sky.

CHEOPS, a joint mission from the European Space Agency (ESA) and the University of Bern, is not designed to discover new worlds, but to carefully study the size, mass, and composition of known exoplanets. Over the course of its mission, CHEOPS could examine thousands of alien worlds in unprecedented detail.

“Shortly after the launch on December 18, 2019, we tested the communication with the satellite. Then, on January 8, 2020, we started the commissioning, that is, we booted the computer, carried out tests, and started up all the components,” explains Willy Benz, professor of astrophysics at the University of Bern and principal investigator of the CHEOPS mission.

During launch and initial orbital testing, the optics of the orbiting observatory were protected by a 97 cm (37″) baffle cover, acting much like a lens cover for a camera, protecting the instrument from dust, debris, and bright light from the Sun.

Mission engineers at the Instituto Nacional de Técnica Aeroespacial (INTA) in Spain gave the command for the cover on CHEOPS to open, preparing the camera to record its first data.

An electrical signal fed a cylinder made from a shape memory alloy, stretching the metal, breaking a bolt encased inside. The fracture of that bolt released a hold on the cover, which sprung open, coming to rest against a retaining fixture, opening the eyes of CHEOPS.

“The opening mechanism is known to be extremely reliable, as it was extensively tested on ground and already flown on previous space missions, but it was still quite a nerve-wracking moment to witness, and we are all very excited now that the telescope has opened its eye to the Universe,” said Francesco Ratti, ESA Cheops instrument engineer.

CHEOPS is a small S-class mission for ESA, measuring just 1.5 meters (five feet) in length, with a mass of just 280 kilograms (617 pounds on Earth).

The spacecraft in the ESA S-Class program are fairly small, inexpensive (costing less than 50 million Euros or $55 million), and they are quick to develop. These requirements have inspired developers to rely on ready-made technology and equipment when planning new missions.

Since its launch on December 18, 2019 on board a Soyuz Fregat rocket, CHEOPS has performed each of its commissioning tasks without fail. The spacecraft entered a polar orbit (circling the Earth from one pole to another) 700 kilometers (435 miles) above the line where day meets night.

All systems reported the telescope was ready to open its eyes to the sky, and mission engineers provided the go ahead to the spacecraft to commence its observations.

My dear Kepler, what would you say of the learned here, who, replete with the pertinacity of the asp, have steadfastly refused to cast a glance through the telescope? What shall we make of this? Shall we laugh, or shall we cry? ― Galileo Galilei, Frammenti e lettere

CHEOPS will study exoplanets previously discovered by other instruments, carefully noting how planets block infrared light from their local star as they complete their orbit. Each time a planet passes between its star and observers on Earth, a percentage of light from that star is blocked. By measuring that dimming, astronomers can calculate the diameter and densities of alien worlds, measurements at the center of the CHEOPS mission.

Focused on the study of worlds larger than Earth but smaller than Neptune, CHEOPS is faced with measuring tiny amounts of light blocked by the smallest exoplanets.

The CHEOPS observatory, from its vantage point above the atmosphere, will provide date on these exoplanets at an unprecedented level of detail. Here’s a look at how the CHEOPS will assist astronomers in the study of exoplanets by the European Space Agency.

Together, TESS and the James Webb Space Telescope could discover 10,000 planets orbiting other stars. Their discoveries will be followed up by CHEOPS, allowing astronomers to study the worlds in unprecedented detail.

Over the next couple of months, the mission team will test CHEOPS on its first planets in other solar systems, and the first images from the spacecraft will be available in one to two weeks, reports the University of Bern.

The original Cheops, pharaoh of Egypt 46 centuries ago, ordered the construction of The Great Pyramid of Giza. His namesake, the CHEOPS space telescope, may be smaller than that mammoth catacomb, but its dream is no less grandiose.

Read next: Here’s how much money you made Google by staring at its ads for 20 years