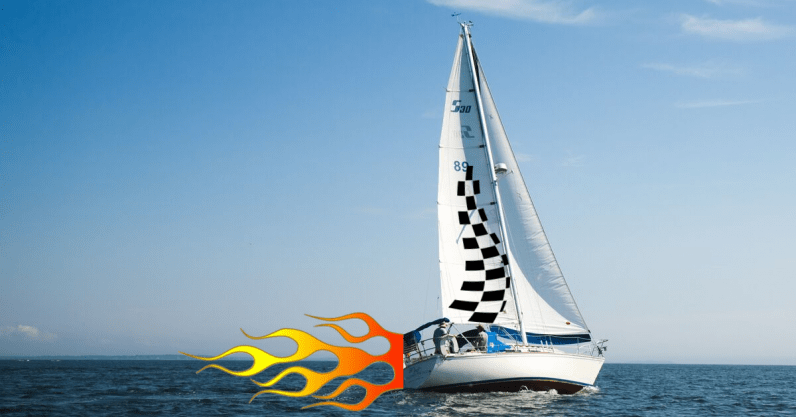 Sailing used to be considered as a rather sedate pastime. But in the past few years, the world of yacht racing has been revolutionized by the arrival of hydrofoil-supported catamarans, known as “foilers”. These vessels, more akin to high-performance aircraft than yachts, combine the laws of aerodynamics and hydrodynamics to create vessels capable of speeds of up to 50 knots, which is far faster than the wind propelling them.

An F50 catamaran preparing for the Sail GP series recently even broke this barrier, reaching an incredible speed of 50.22 knots (57.8mph) purely powered by the wind. This was achieved in a wind of just 19.3 knots (22.2mph). F50s are 15-meter-long, 8.8-meter-wide hydrofoil catamarans propelled by rigid sails and capable of such astounding speeds that Sail GP has been called the “Formula One of sailing”. How are these yachts able to go so fast? The answer lies in some simple fluid dynamics.

As a vessel’s hull moves through the water, there are two primary physical mechanisms that create drag and slow the vessel down. To build a faster boat you have to find ways to overcome the drag force.

The first mechanism is friction. As the water flows past the hull, a microscopic layer of water is effectively attached to the hull and is pulled along with the yacht. A second layer of water then attaches to the first layer, and the sliding or shearing between them creates friction.

On the outside of this is a third layer, which slides over the inner layers creating more friction, and so on. Together, these layers are known as the boundary layer – and it’s the shearing of the boundary layer’s molecules against each other that creates frictional drag.

A yacht also makes waves as it pushes the water around and under the hull from the bow (front) to the stern (back) of the boat. The waves form two distinctive patterns around the yacht (one at each end), known as Kelvin Wave patterns.

These waves, which move at the same speed as the yacht, are very energetic. This creates drag on the boat known as the wave-making drag, which is responsible for around 90 percent of the total drag. As the yacht accelerates to faster speeds (close to the “hull speed”, explained later), these waves get higher and longer.

These two effects combine to produce a phenomenon known as “hull speed”, which is the fastest the boat can travel – and in conventional single-hull yachts it is very slow. A single-hull yacht of the same size as the F50 has a hull speed of around 12 mph.

However, it’s possible to reduce both the frictional and wave-making drag and overcome this hull-speed limit by building a yacht with hydrofoils. Hydrofoils are small, underwater wings. These act in the same way as an aircraft wing, creating a lift force which acts against gravity, lifting our yacht upwards so that the hull is clear of the water.

While an aircraft’s wings are very large, the high density of water compared to air means that we only need very small hydrofoils to produce a lot of the important lift force. A hydrofoil just the size of three A3 sheets of paper, when moving at just 10 mph, can produce enough lift to pick up a large person.

This significantly reduces the surface area and the volume of the boat that is underwater, which cuts the frictional drag and the wave-making drag, respectively. The combined effect is a reduction in the overall drag to a fraction of its original amount, so that the yacht is capable of sailing much faster than it could without hydrofoils.

The other innovation that helps boost the speed of racing yachts is the use of rigid sails. The power available from traditional sails to drive the boat forward is relatively small, limited by the fact that the sail’s forces have to act in equilibrium with a range of other forces, and that fabric sails do not make an ideal shape for creating power. Rigid sails, which are very similar in design to an aircraft wing, form a much more efficient shape than traditional sails, effectively giving the yacht a larger engine and more power.

As the yacht accelerates from the driving force of these sails, it experiences what is known as “apparent wind”. Imagine a completely calm day, with no wind. As you walk, you experience a breeze in your face at the same speed that you are walking. If there was a wind blowing too, you would feel a mixture of the real (or “true” wind) and the breeze you have generated.

The combined effect of reducing the drag and increasing the driving power results in a yacht that is far faster than those of even a few years ago. But all of this would not be possible without one further advance: materials. In order to be able to “fly”, the yacht must have a low mass, and the hydrofoil itself must be very strong. To achieve the required mass, strength and rigidity using traditional boat-building materials such as wood or aluminium would be very difficult.

This is where modern advanced composite materials such as carbon fibre come in. Production techniques optimizing weight, rigidity and strength allow the production of structures that are strong and light enough to produce incredible yachts like the F50.

The engineers who design these high-performance boats (known as naval architects) are always looking to use new materials and science to get an optimum design. In theory, the F50 should be able to go even faster.

This article is republished from The Conversation by Jonathan Ridley, Head of Engineering, Warsash School of Maritime Science and Engineering, Solent University under a Creative Commons license. Read the original article.

Read next: Signal patches Android bug that allowed hackers to answer calls on your behalf