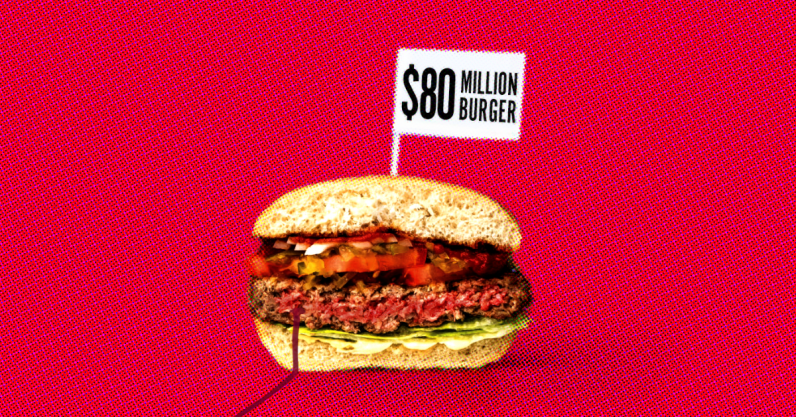 Credit: How We Get To Next

Whole grains, legumes, and vegetables enjoyed one year at the top of the burger heap. In 2015, “the best burger of the year,” as declared by GQ, was from New York City’s Superiority Burger, a tiny vegetarian joint run by former upscale pastry chef Brooks Headley. The recipe, per the restaurant’s 2018 cookbook, includes red quinoa, yellow onions, chickpeas, walnuts, carrots, potato starch, and other general pantry items. In 2016, the Silicon Valley-based Impossible Burger made its restaurant debut at David Chang’s Momofuku Nishi, boasting a development price tag of around $80 million. (Chang himself, of course, had been famously anti-vegetarian until he tasted the fake-bloody fruits of tech labor.) Though Beyond Meat’s eerily meat-like veggie burger beat the Impossible Burger to market by three years, the latter marked the high-end launch of a tech burger, a meatless alternative that finally — finally! — carnivores could feel good about eating. Or at least that’s what they thought.

In the Superiority Burger Cookbook, the burger recipe’s headnote makes mention of these new studs of the vegetarian world, calling out “the modern gaggle of vegetable patties that bleed and squirt and ape.” Headley’s version is their opposite, “meant to be a Luddite response” to tech-world innovations, and is also “recognizable as food.” (A scathing juxtaposition.) But this philosophy is not so fashionable, as more and more restaurants opt to put ready-made patties on their menus. As of November, 2018, the Impossible Burger was available in 5,000 restaurants across the U.S. — up from 50 just one year prior.

As for the Beyond burger, its array of ingredients is even larger:

No wonder these burgers have been so quickly adopted by fast-food chains. In fact, White Castle added Impossible to the menu in 2018, and Carl’s Jr. picked up Beyond Meat this year. To many vegans, this was a marker of success — despite the fact that these restaurants still sell cheaply-produced meat and still deny most of their workers a living wage. But “fake meat,” as manifested by these beefy non-beef patties, remains a major point of contention — legally and culinarily — for the culture at large.

In a recent Guardian article, food writer Bee Wilson discusses her concern that vegetarian options might always be perceived as healthier than meat, despite their individual nutrition facts. Meanwhile, laws are being passed in the United States to ban the word “meat” from the packaging of animal-free products, in order to protect the livelihood of the livestock industry. In her 2018 book Burger, Carol J. Adams (who’s also the author of The Sexual Politics of Meat) argues that these new editions of the common foodstuff have taken “the non-meat burger” from “the chewy cardboard mocked by food reviewers” into a possible vegan future. And the mainstream press remains obsessed with what these veggie burgers mean for the future of food, even as beef consumption remains high in the U.S. — hitting record levels in 2018, according to the U.S. Department of Agriculture.

The issues that these burgers raise are more significant than whether they taste good when they come off a barbecue grill. The combination of millions of dollars in venture capital, tech-bro culture, and the expensive and ethically dubious development of burger patties that only appear to bleed — it’s a story that would have to be made up if it weren’t already true. It also raises further questions: What distinguishes environmental stewardship from a ploy for profits? What is the true environmental impact of this product?

Vegan scholar Garrett Broad has made a point of pursuing answers. In a 2017 essay for Civil Eats, he explores the utopian claims that CEOs of tech-based food startups frequently make. “We’re lucky that for the first time in a long time, profit-seeking behavior and what’s good are aligning,” Ethan Brown, Beyond Meat’s CEO, tells Broad in an interview. (Meanwhile, Tyson Foods bought 5 percent of Beyond Meat in 2016.)

Brown argues that companies such as his can change which crops are grown on a large scale. Widespread demand for lentils instead of beef would undoubtedly be better for the health of our soil and water. But turning the lentils into a processed meat-like product, rather than selling them directly to consumers, introduces a middleman of questionable necessity. The result is more industrialized processes and a higher price tag. Consider this: Beyond Meat costs nearly $12 per pound. Grass-fed beef can cost as little as $3.70. A pound of dry lentils, meanwhile, sells for less than $2.

Could the future of the vegan patty be one of uniform flavor manufactured by a handful of companies? The burger holds an especially firm grip on the U.S. psyche: an accessible and versatile protein source that requires no utensils, nor even a plate. The “Americanness” of the hamburger, as Adams writes in Burger, arose from the new availability of cheaper, more available beef in the 1800s. There are centuries of culture at play when we reach for fatty protein stuffed in a bun.

As more folks want to eat less meat, lab-made products offer options that don’t demand a whole new sensory vocabulary. But convenience and familiarity are dubious drivers of the food economy. After all, they’re a major reason for the success of factory-farmed meat despite its myriad problems involving human and animal exploitation, environmental racism, and greenhouse gas emissions.

“It’s frustrating to me that vegans and vegetarians get knocked for this so much — that because they don’t eat meat, they shouldn’t crave some of the characteristics, like juiciness, or that ‘meaty’ texture of a ‘real’ hamburger,” says Lukas Volger, author of the cookbook Veggie Burgers Every Which Way and editorial director of Jarry magazine. He acknowledges the nostalgia factor, but the proliferation of meatless burgers remains troubling to him. He’s someone who has used the veggie burger as a way to explore the textures and flavors of the whole grains, legumes, and vegetables that mark more old-school versions of the dish.

“I know that a number of chefs are throwing their support behind these burgers, which seems to be really boosting their profile, but they’re still highly processed foods,” says Volger. “As a diner, seeing an Impossible Burger on the menu is the sign of an uninspired chef.”

A future food system that doesn’t mimic meat’s mistakes could still be possible — but it might require going back to basics. Light up the stove: there are lentils to boil.

Read next: IBM’s Hyperledger isn’t a real blockchain — here’s why