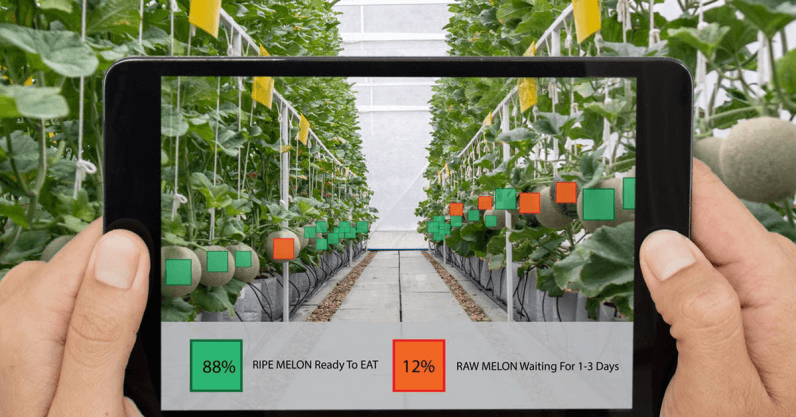 There’s a lot of talk about digital technology and smart cities, but what about smart farms? Many of us still have a romantic view of farmers surveying rolling hills and farm kids cuddling calves, but our food in Canada increasingly comes from industrial-scale factory farms and vast glass and steel forests of greenhouses.

While the social and environmental consequences of agri-food industrialization are fairly well understood, issues around digital technology are now just emerging. Yet, technology is radically transforming farms and farming. And while different in scale and scope, technology is playing a growing role in small and organic farming systems as well.

In reality then, your friendly local farmer will soon spend as much time managing their digital data as they will their dairy herd. The milking apron is being replaced by the milking app.

The Canadian government is investing heavily in climate-smart and precision agricultural technologies (ag-tech). These combine digital tools such as GPS and sensors with automated machines like smart tractors, drones and robots in an attempt to increase farm profits while reducing pesticide and fertilizer use. GPS mapping of crop yields and soil characteristics help to cut costs and increase profits, so while seeds still grow in soil, satellites are increasingly part of the story. There’s no doubt that ag-tech may be promising for governments, investors and corporations, but the benefits are far less clear for farm owners and workers.

There is little research on the potential social impacts of ag-tech specifically, so a group of researchers at the University of Guelph conducted a study to figure out some of the likely impacts of the technological revolution in agriculture.

While changes in agriculture show promise for increasing productivity and profits and reducing pesticides and pollution, the future of farming is not all rosy.

Corporate control of many agricultural inputs — seeds, feed, fertilizers, machinery — is well documented. Agricultural land is also increasing in cost and farms are getting bigger and bigger. It is likely that digital agriculture will exacerbate these trends. We’re especially interested in what farm work will look like as the digital revolution unfolds.

Marginalized workers are set up to lose

While rising costs are always a concern for producers and consumers, we have two main concerns about how the digital revolution is changing farm work in particular.

First, who owns all of the data being produced in precision agriculture? Farm owners and workers produce data that has massive potential for commercial exploitation. However, just who gets to harvest the fruits of this digital data labor is unclear.

Should it flow to those who produce it? Should it be something that we own collectively? Unfortunately, if smart farms are anything like smart cities, then it looks like corporate control of data could tighten.

Second, it’s very likely that ag-tech will lead to an even more sharply divided labor force. So-called “high-skilled” managers trained in data management and analysis will oversee operations, while many ostensibly “lower-skilled” jobs are replaced. Remaining on-the-ground laborers will find themselves in working conditions that are increasingly automated, surveilled and constrained. For instance, in fruit and vegetable greenhouses inputs are increasingly being controlled remotely, but migrant workers still do much of the planting and harvesting by hand. And, they do so under conditions of severe physical and social immobility.

There is a wealth of research documenting the vulnerable position of migrant agricultural workers from coast to coast in Canada and elsewhere.

If we don’t direct it in a humane way, the digital revolution in agriculture is likely to heighten these vulnerabilities.

The agricultural system was built that way

Our food system is built on centuries of Indigenous land theft, dislocation and the suppression of Indigenous foodways while relying heavily on exploitable (Indigenous, migrant and racialized) labor. Across North America, farm workers have long been excluded from basic labor laws, legal status and the right to unionize.

And now, increased productivity often relies on increased exploitation – just ask anyone working in a FoxConn factory. As a result, our current food system is rife with exploitative practices, from production through to distribution, with racialized immigrants bearing the brunt.

Meanwhile, there is evidence that automation tends to negatively impact already marginalized workers.

Our concern is that the suite of jobs that remain will only deepen economic inequities — with more privileged university graduates receiving the bulk of the well-paid work, while further stripping physical laborers of their power and dignity.

There is no magic pill, but our governments do have options. Policy and legislation can shift the path of ag-tech to better support vulnerable farm workers and populations. In doing so, the looming issue of land ownership and repatriation must be addressed in Canada, with Indigenous nations at the head of the table alongside marginalized workers and farmers. Supporting pathways to farming and permanent residency for migrant workers, as well as training for digital skill-building can help to close more immediate gaps.

We need to ready ourselves for how radical transformations in food production and distribution will impact land prices, property rights and working conditions. Our folksy view of farming is due for an update.

This article is republished from The Conversation by Sarah Rotz, Postdoctoral Fellow , Queen’s University, Ontario and Mervyn Horgan, Visiting Fellow, Department of Sociology, Yale University and Associate Professor of Sociology, University of Guelph under a Creative Commons license. Read the original article.

Read next: Pay what you want for 200+ hours of Ruby on Rails training