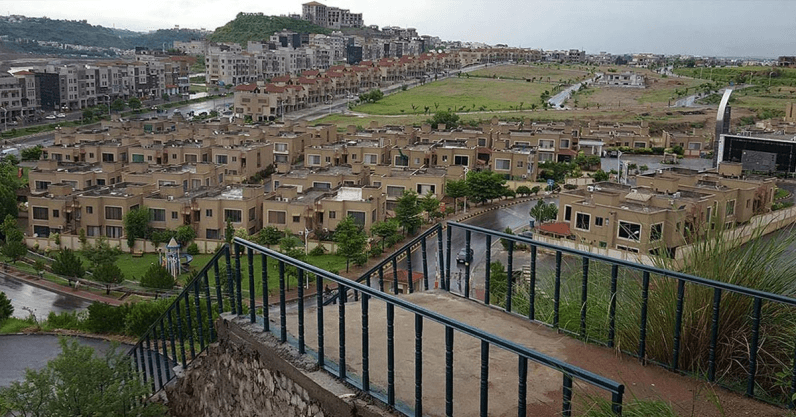 Credit: How We Get To Next

Over the last five years, something strange has happened at the eastern edge of Karachi, the crowded megalopolis in southern Pakistan. From scratch, a new city has appeared, complete with its own smooth asphalt highways, schools, hospitals, housing options ranging from modest apartment blocks to posh farmhouses — and, of course, an imitation Eiffel Tower.

This is Bahria Town Karachi, an ambitious housing development ultimately planned to cover more than 45,000 acres of land — which is about the same size as Washington, D.C. In Pakistan, its name is synonymous with one man: property developer Malik Riaz, one of the ten richest people in the country and the city’s ultimate proprietor. He’s built similar planned neighborhoods near Islamabad and Lahore.

The site is still under construction, but sections are already inhabited, with hundreds more plots sold before they’ve even been built. The proposition is clear: this is how to buy your way out of urban chaos. Karachi, a city of over 15 million, is frequently the site of conflict, from terror attacks to gang wars, and it also suffers chronic shortages of water, gas, and electricity. Bahria Town promises its own private supply of these basic amenities, so when residents purchase a property here, they are also theoretically paying to avoid power cuts and enjoy regular garbage collections.

Bahria Town is vast in scope, but Malik Riaz is not the only wealthy individual to have ambitions of building his own city. In India, billionaire Ajit Gulabchand started construction of Lavasa in 2010, claiming it would be India’s first newly-built hill station since independence. Situated two hours from the IT hub of Pune and four hours from Mumbai on the western coast, the still-incomplete town is modeled on an Italian fishing village. Like Bahria Town, it markets itself as an ordered and calm alternative to the chaos of India’s rapidly-expanding cities.

Driving around Bahria Town Karachi, I couldn’t shake the sense of being in a parallel universe. It was not just the surreal sculptures — bears, tea cups, flowers — in the middle of the roundabouts, nor the miniature imitation Parthenon. There was something about the identikit apartment blocks and villas, the uniformly-planted palm trees, that was strangely generic. It reminded me of something that Alexandra Schwartz recently wrote in The New Yorker: “That vision of luxury is all about a frictionless sameness: being able to do and eat and buy the same things, in the same kinds of settings, to the tune of the same ambient music, no matter where on the globe one may be.”

She was writing about Hudson Yards, a controversial 28-acre collection of glass towers and high-end retailers on the far western edge of Manhattan. But her words could equally have applied to Bahria Town, which — from the Gulf-style palm trees that line the streets to the ad copy on its website comparing its green spaces to New York City’s Central Park — stakes its appeal on offering a globally-homogenized vision of city living.

Around the world, urban space is being privatized — either through the construction of altogether new cities, or existing ones outsourcing services and construction that the municipalities cannot afford. In the U.K., an increasing number of parks and thoroughfares are now “pseudo-public” — appearing to be public land but actually owned and controlled by private companies. Local authorities say they cannot afford to create or maintain these spaces themselves.

This points to both the appeal and the problem with privatized urban spaces. Privatization advocates argue that bureaucratic government entities cannot operate at the same speed as private companies, and that the free market can meet public demand faster, more efficiently, and more accurately. This argument has been applied to almost all areas of modern life in many countries in the world over the last few decades — so why not to entire cities as well?

Just as a private corporation might be able to remodel a London square or park faster than the government, Bahria Town’s system of roads and sewerage was built faster than a municipal government ever could. But planning permission, zoning laws, and public consultations exist for a reason. Major changes to an urban environment, or mass-scale, lightning-speed construction usually means the dismantling or displacement of what — and who — was there before.

The reason a privatized city is so much quicker and easier to build is not down to the inherent superiority of the free market, but because it removes power from people and communities and centralizes it into the hands of one person or corporation. This is the same dynamic at play in China, for example, where the nominally communist government has been able to build vast new towns and cities from scratch because it doesn’t have to worry about eminent domain or democratic accountability.

This is starkly evident in Karachi, where Bahria Town has illegally appropriated land on a massive scale, bulldozing villages and agricultural lands to make way for the new city — to the extent that, in 2018, Pakistan’s Supreme Court ordered a halt on all further construction until landowners were properly compensated. Lavasa has also been accused of acquiring land through coercion, and of causing environmental damage through quarrying.

Essentially, this is about a lack of accountability — and it applies just as much to the residents of these new cities and neighborhoods as it does to those who were displaced to make room for them. In a 2013 article for Open Democracy about Lavasa, Persis Taraporevala, a researcher at the Centre for Policy Research in New Delhi, warned: “The company has sweeping rights over nearly all aspects of the life of the residents. It has the right to evict, to tax, to determine the use and design of land, to change the governing body, and to change the rules while controlling the rights of people to object to these processes.”

This came sharply into view for the first wave of Bahria Town residents when Pakistan’s Supreme Court issued its construction halt order in November 2018, which led to the company taking a big financial hit. Suddenly, those reliable electricity and water supplies were switched off. Then, this month, the Supreme Court announced it would accept Malik Riaz’s offer of 406 billion Pakistani rupees ($2.89 billion) to “settle the case” and allow construction to resume. Depending on your viewpoint, this is either a shocking example of crony capitalism in which an extraordinarily rich man could essentially pay to circumvent the law — or a fair decision to safeguard the investment of the thousands of ordinary people who had already spent huge amounts of money to purchase properties in Bahria Town.

When the company hits hard times, the residents do too, but there’s no way to vote to un-privatize Bahria Town. When urban planning becomes the preserve of corporate interests, the usual rules go out of the window.

Read next: Learn to use Adobe's flagship design programs for less than $40