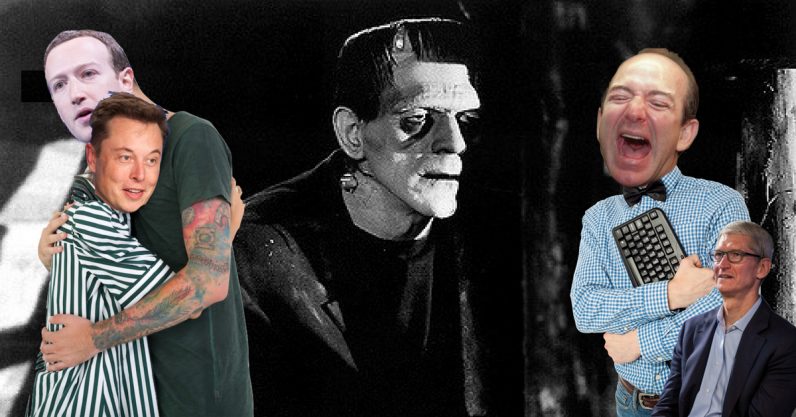 Social media, smartphones, and other cutting-edge technology were supposed to improve the social experience and facilitate communications and access to information. But now they’ve become the source of many ills, including fake news, live suicides, and murders, hate speech and trolling, inescapable filter bubbles, and an immense distraction problem.

In the past year, we saw an increasing number of incumbent and former tech execs acknowledge the adverse effects that their most revered products have on their users and the society in general. Their story runs oddly in parallel to that of Dr. Victor Frankenstein, the fictional scientist who tried to flee the grotesque creature he created in his lab.

Frankenstein’s monster eventually caught up with him, destroyed everything dear to him and led to the doctor’s own demise. Is the tech industry headed for a similarly tragic fate?

Our brains have been hijacked

Tristan Harris used to be a product manager at Google. Today, he’s a vocal critic of the way big tech companies (such as the one he helped flourish) design their products in ways to keep users hooked to them. Harris has given a TED Talk on the topic, appeared on CBS 60 Minutes, and has been interviewed by several publications.

He now runs Time Well Spent, a nonprofit organization that aims to stop tech companies (like the one he helped flourish) from “hijacking our minds.”

In an interview with Wired, Harris said, “[Technology is] possibly the largest source of influence over 2 billion people’s thoughts that has ever been created. Religions and governments don’t have that much influence over people’s daily thoughts. But we have three technology companies who have this system that frankly they don’t even have control over — with newsfeeds and recommended videos and whatever they put in front of you — which is governing what people do with their time and what they’re looking at.”

Examples include YouTube’s autoplay feature, Snapchat streaks, social awareness cues that tell you how recently someone was present online or has viewed your profile. These features, when combined with the wealth of data that these companies have about their users and the machine learning algorithms that power their platforms, makes these systems “better at hijacking your instincts than you are at controlling them,” Harris says. “You’d have to exert an enormous amount of energy to control whether these things are manipulating you all the time.”

Facebook made a billionaire out of Sean Parker, its founding president. Now, Parker regrets the unintended consequences of what he helped created (except for the money he made, most probably).

“[Facebook] literally changes your relationship with society, with each other. It probably interferes with productivity in weird ways,” Parker said at an Axios event.

In his early days, he would deride people who would avoid social media in favor of real-life interactions and would tell them that they would eventually sign up on the platform anyway. “I don’t know if I really understood the consequences of what I was saying,” he said at the Axios event.

Parker says Facebook’s designers aimed to create something that could consume as much of the time and conscious attention of its users as possible. “And that means that we need to sort of give you a little dopamine hit every once in a while because someone liked or commented on a photo or a post or whatever. And that’s going to get you to contribute more content, and that’s going to get you… more likes and comments.”

Parker said that he, Zuckerberg and other Facebook developers consciously knew they were exploiting a vulnerability in human psychology. “And we did it anyway,” he admitted.

“God only knows what it’s doing to our children’s brains,” Parker said.

In 2007, Justin Rosenstein was among a small team of Facebook developers who created the “like” button, initially called the “awesome” button. The feature was wildly successful and led to a spike of engagement across Facebook, as well as replications on other platforms such as Twitter and Instagram.

Presently, Rosenstein works on a laptop tweaked to block Reddit. He has also banned himself from Snapchat and has imposed limits on his use of Facebook. He also uses an iPhone on which his assistant has set a parental lock to prevent him from installing new apps.

“It is very common for humans to develop things with the best of intentions and for them to have unintended, negative consequences,” Rosenstein said in an interview with Guardian. “One reason I think it is particularly important for us to talk about this now is that we may be the last generation that can remember life before,” he added.

Blaming others for your own mess

“I don’t believe in overuse [of technology]. I’m not a person that says we’ve achieved success if you’re using it all the time. I don’t subscribe to that at all,” Apple CEO Tim Cook said during a visit to Harlow college in Essex, UK.

Cook, who doesn’t have a child, said he doesn’t want his nephew to be on social networks. But while he was quick to criticize social media networks for creating addictive and distracting services, he didn’t acknowledge his own company’s contribution to the problem

Last year, former Apple employees who helped design the iPhone asserted at a talk that the device has a distractive and addictive effect. “I certainly am not excited about how much of a distraction it is in people’s lives,” said Brian Huppi, one of the principal input engineers who developed the iPhone’s initial touchscreen foundation. “I’ve got to believe there’s just so many accidents on the road now from people looking at their phones.”

More recently, Wall Street investors sent an open letter to Apple, asking the company to study the health effects of its products and to make it easier for parents to limit their children’s use of iPhones and iPads. “As more and more founders of the biggest tech companies are acknowledging today, the days of just throwing technology out there and washing your hands of the potential impact are over,” said Barry Rosenstein, managing partner of Jana Partners, the investment firm that wrote the letter, in an interview with The New York Times.

How to fix the problem?

“The first step is just understanding that you don’t really get to choose how you react to things,” Harris, the former Google product manager, told Wired. As Harris explains, we must acknowledge that we’re up against thousands of engineers, some of the world’s smartest minds “working to undermine the agency we have over our minds.”

He also suggests new designs for mobile and web applications geared toward encouraging users to meet in person instead of pushing for more engagements online. For instance, he suggests that the Comment button is replaced with a “Let’s meet” button.

Harris suggests that these companies must look toward new business models. He draws an analogy from early energy companies, whose profit was tied to customers consuming more and more energy, what he called a perverse relationship. “In many US states, we changed the model to decouple how much money energy companies make from how much energy you use,” he said. “We need to do something like that for the attention economy because we can’t afford a world in which this arms race is to get as much attention from you as possible.”

But how do you convince companies like Facebook to remedy a situation that is making them billions of dollars? These companies have built their empires on monetizing user attention. If they start altering their services to stop distracting their users, they will be hurting their own bottom lines.

Some believe device manufacturers like Apple are better positioned to contribute to the solution, because their main revenue comes from selling hardware, not keeping users hooked to their devices. Apple doesn’t care how much you use your iPhone so long as you buy a new one every two years or so.

Therefore, if it changes its iOS operating system to make it less distracting (by maybe changing the way or how often it displays notifications), it can help address the distraction problem without hurting its business model (given that the change doesn’t affect customers’ inclination to buy its new iPhones when Apple rolls them out).

In my opinion, that we can’t trust any of the big tech corporations to take any part in fixing their own mess. Hopefully, as the public becomes more aware of the endemic problem that incumbent tech firms are causing, they’ll start migrating to decentralized platforms that put users in more control of their digital lives. How much more damage will tech’s Frankenstein cause by then? We have yet to see.

Read next: This VR project shows us how animals see the world