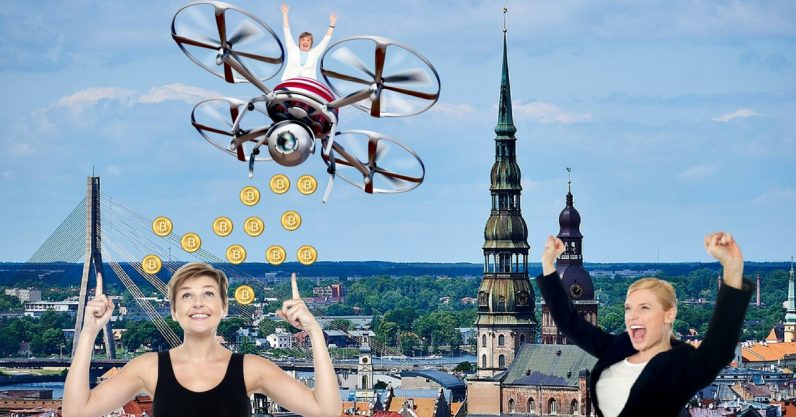 With TechChill approaching, it’s worth to bring some attention to some of the promising early-stage startups from the Baltic country making waves this year. Some of them are very fresh and a few others have attracted first funding rounds (or done ICO’s), but here’s our selection of the ten early teams we are counting on to make the headlines in 2018.

B2B and Fintech have up until now been the main focus areas for Riga startups, no doubt related to the historically strong banking industry there, and its talent often moving to tech. Blockchain has been on top of everyone’s minds, and we can see startups make the most of it – quite a few teams are either working with cryptocurrency or blockchain solutions.

Currently, the most widespread tool for movement analysis in sports is video. However it ads a lot of complexity to the lessons as many conditions have to be pre-arranged (operating the camera, field, and angle of view, lightning, uploading and analyzing the data). HackMotion wearable sensors provide a real-time data stream of the user body model in 3D by perfectly replicating all its movements.

On top of that this system can notify the user instantly if the movement deviates from the desired form. The company has launched the first product for sports target shooting and currently is developing a system for golf that is scheduled to go to the market in 2018. First customers are coaches and athletes, but later consumer market is set to follow.

HackMotion’s developed IP also opens them the future possibilities to build products for such industries as healthcare, defense, gaming, 3D design, and manufacturing.

HackMotion was founded in late 2016, has graduated two accelerator programs – Buildit Hardware Accelerator in Estonia and Startup Sauna in Finland. They have also been selected as one of Slush Top 100 startups in 2017. The company has been bootstrapping until now and is starting seed stage fundraising in nearest months.

CastPrint is bringing the experience of fracture treatment to the 21stCentury for both the patient and the healthcare professionals. While in most cases traditional plaster casts are used to provide immobilization during fracture treatment, CastPrint offers personalized 3D printed casting solution – CastPrint.

In close cooperation with the most innovative medical professionals, CastPrint has created a solution that is lightweight, ventilating and waterproof! This solution can be integrated into the daily operations of any healthcare institution saving costs for the organization and time of the personnel.

The CastPrint team brings together professionals with experience and knowledge in the medical device industry, pharma and healthcare, 3D printing and design as well as readiness to learn and to bring us closer to addressing a 500M market in Europe (2 Billion Globally) and changing the fracture treatment process as we know it!

In late 2015 European Parliament adopted the revised Directive on Payment Services (or PSD2). For financial companies that meant adopting strong two-factor authentication for bank login and transaction approval. As at that time there were no solutions to solve bank needs on a scale, professionals, who developed Latvian State ID card architecture and e-signature set a mission to come up with the most secure and convenient solution for meeting the regulatory requirements.

Quite recently we have finished work on a blockchain solution to meet Know Your Customer (KYC) requirements when conducting a business with a new customer. At its core, the solution allows re-using once verified identity with as many service providers as the user wants.

Attached is a photo from last year signing a partnership with Credit Suisse, UBS, and Swisscom.

DigiPulse is the world’s first ‘digital inheritance vault’, which aims to ensure that all digital asset holders and crypto wallet users have ultimate control over who inherits their digital assets – cryptocurrencies, images and any other content.

Established by two friends in 2017, Co-founder and CTO Dmitry Dementyev-Dedelis first saw the potential for DigiPulse when he encountered health issues and realized that, if he were to pass away, his family would be unable to access his digital assets.

The B2C service platform aims to solve this issue by allowing its users to store and encrypt information on a decentralized blockchain. Having raised more than $1million in their Token Sale in October, the team of six is currently preparing for their Beta product launch in January 2018.

Monetizr (Techstars ’17) is launching the first blockchain-based universal game reward engine designed to enhance the experience for gamers, engagement for game developers, and reach for brands.

Based on Ethereum blockchain, the Monetizr token (MTZ) rewards players for their achievements, skills, and time spent in the game, and benefits game developers via monetization, retention, and engagement. MTZ can be used across multiple games, initially available on mobile devices and eventually across the whole gaming ecosystem. To “jump-start” the system and create a platform we’re launching a token sale in Q1 2018 –  the users are the ones who can help us in this process.

To find out more and get whitelisted, subscribe here: http://eepurl.com/c7Fxq1

Robotic Solutions helps companies prepare for an autonomous future. Starting in the floor cleaning industry, but applicable to numerous domains for manual machinery operated indoors, their solution consists of localization for machine positioning indoors; automation, which takes away the human operator, and the ability to work together in teams to ensure redundancy and better fleet management.

It addresses the 1.2 million floor cleaning machine market in Europe that spends around EUR 14.4 billion for people to simply guide their machines around a facility. Having the product developed for machine manufacturers, Robotic Solutions also allows them to start robotizing already existing machines. By having 6 localization pilots and 14 more in the pipeline, Robotic Solutions is bridging the information gap between the manufacturers and users of machinery.

Robotic Solutions is a current participant of Startup Bootcamp IoT London Accelerator, and Startup Wise Guys accelerator alumni. They are assisted in their product development by Manufacturing Technology Center and Fraunhofer IPA.

Lokalise is a modern localization and translation tool for tech-driven teams developing iOS, Android apps, web, games, IoT or software in general, on their own or for their clients.

Thanks to its web-based collaborative editor, cross-platform projects and localization keys, automatic screenshot matching, numerous integration options and plugins, the tool saves tens and hundreds of routine development and production hours at a fraction of costs.

Besides app localization, Lokalise iOS and Android SDK provide over-the-air text updates bypassing the Appstore and Google Play. Teams can translate on their own or order translations into 90+ languages via the platform. Year to date, Lokalise has been growing 60% MoM reaching $1M ARR with such clients as Vodafone, Bayer, and Revolut.

CENOS is an affordable platform for engineering simulation. It connects the most proven open source simulation tools into the single user-friendly platform.

CENOS helps industrial SMEs replace time-consuming and expensive physical prototyping by virtual testing using modern simulation tools in a cost-efficient way. The founders believe that there is a huge underrated potential behind engineering open source tools and their communities, we just need to unleash this power to enable sharing economy for the fast-growing $4B-worth simulation software market.

Freshly found in March 2017, CENOS graduated Startup Wise Guys accelerator in Tallinn and successfully launched the first product for niche industry in November. They presented what they called a prototype at an industrial expo in Columbus (OH, USA), and immediately experienced significant interest from industry and got 16 demo-customers straight away.

CENOS won 500 startups pitch competition at Digital Freedom Festival and was invited to the final interview for the next acceleration program in Silicon Valley. The team was also ranked as the 2nd at Nordic Angel Choice Award in Copenhagen in September 2017.

For the first time, because of disruptive innovation, these technologies are available to any mid or low-level leagues/teams who’ve been waiting many years for such technologies. PlayGineering opened the new uncontested markets in Sports analytics and entertainment industry worth billions and PwC expected growth more than 10 times till 2022.

PlayGineering Systems has reached more than 60 sales in 18 countries, dealer network in 40 countries, already more than double 777K revenue of 2016 with already generated more than 1.5 million EUR revenues in Q4 of 2017 and received Export Excellence Award. In Q1 of 2018, PlayGineering Systems will close A round with 4 million investment attracted, will launch impressive new functionalities, will open a branch in the United States, extend their business in Japan, will reach multiple new geographic markets and new market segments.

AirBoard is a Latvian-based startup on a mission to improve the way people move all around the world. They create the world’s smallest manned aircraft, AirBoard. This year the team took part in one of the most prominent business accelerators in Silicon Valley – Boost VC, run by the fourth generation venture capitalist Adam Draper and are mentored by the billionaire Tim Draper, who was an early investor in companies like Hotmail, Skype, Tesla, and SpaceX.

This article was originally posted on ArcticStartup.

Read next: No, Vitalik Buterin is not giving away free Ether – scammers are taking yours