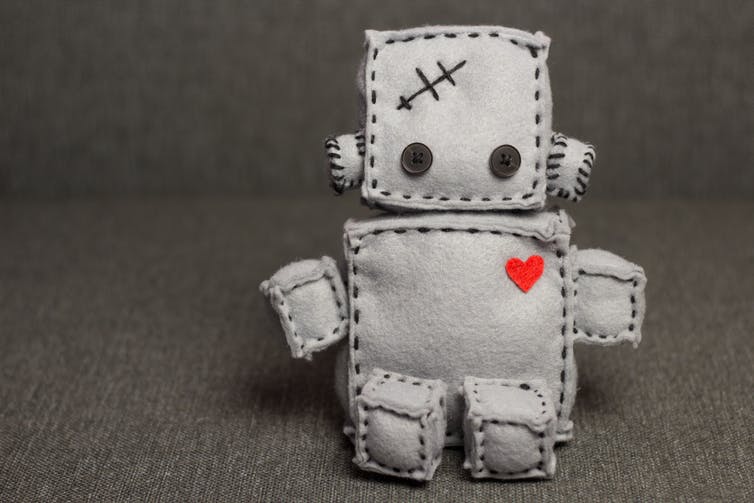 Killer robots are already among us. Not weaponized drones, but industrial robots working alongside humans in factories that can cause significant injuries and occasionally deaths if an accident occurs. In 2015, an employee at a Volkswagen factory in Germany was killed when a robot picked up and crushed him.

Factory workers are typically separated from robots by a physical barrier to minimize accidents. But this prevents all except the most basic of cooperation. A simple way of trying to make robots less dangerous is to coat them in foam to absorb the impact of any collision. But this method has had only limited success. An alternative that could be much more effective is to make the robots themselves soft and squishy, so they’re more like a fleshy animal than a cold, hard machine.

These soft robots would be made from lightweight and deformable materials such as plastic and rubber.

If they collided with someone the effect would be like bumping into another person – annoying but unlikely to cause injury. So there would be no need for safety barriers and robots and humans could work more closely together.

A robot might do the hard work of supporting a heavy component while the human performs a complex assembly task on it. The machine provides the brawn and the person provides the brains, significantly improving what human-robot collaboration currently can achieve.

Some efforts have already been made to reduce the impact of collisions by placing springs between the motors and mechanical links. But robots that are springy instead of stiff are much more difficult to control accurately.

Imagine trying to hit a target with the end of a long, flexible fishing rod.

Other systems have been developed that can switch from being very springy to being stiff when more precise control is needed. But these kinds of robots still tend to be heavy so can cause significant injury if they do collide with people.

Instead, the latest research is focusing on flexible robots inspired by animals that do not have skeletons, such as caterpillars, worms, octopuses or an elephant’s trunk. These would have some unique abilities such as grasping delicate objects without damaging them or wrapping themselves around obstacles. And because they would be lightweight, the force of impact, if there were a collision, would be low. Plus a soft robot would deform on impact, spreading the force over a larger area and reducing the chance of injury.

So far, soft robots have generally been small and unable to carry large amounts of weight. Without a rigid skeleton larger robots, and indeed animals, would not have enough strength to support their own weight. This has limited the application of soft robotics to devices such as grippers and hands.

My colleagues and I at the University of Salford’s Centre for Autonomous Systems and Robotics have built a variable stiffness robot arm that we hope will make progress towards larger soft robots.

This new arm weighs around 1kg but can lift and move a 5kg load. This is a much higher power-to-weight ratio than traditional stiff industrial robots.

Whereas traditional robots are built around a skeleton with joints that enable it to move, our device uses a series of pneumatic muscles made from lightweight rubber and plastic sacs that contract when filled with air – essentially an inflatable robot.

Its shape and size are determined by which muscles are inflated, and it can bend, flex and stiffen like an elephant’s trunk.

Just like in our bodies, some of the robot’s muscles act in the opposite direction to others. If the robot increases the output force of all the muscles, the robot becomes more stiff. We can see the same effect in our own bodies if we tense our triceps and biceps our elbow stays in the same position but the joint becomes more rigid.

This isn’t the only way to make larger soft robots. For example, another approach involves using artificial tendons to transmit forces from heavy and rigid motors (located well away from people) to a soft arm. Different approaches are likely to be needed for different kinds of robots.

Despite this research, developing large and useful soft robots remains a challenge.

The larger a robot gets, the heavier it will likely be and the more dangerous it will become. But new materials may be able to help here.

For example, the two-dimensional form of carbon known as graphene is very strong but lightweight and flexible. So perhaps we could one day see large graphene-based soft robots.

With these kinds of advances, factory workers could soon see the barriers lifted and find themselves working side by side with their robotic colleagues.

Read next: 4 key traits retailers need to adopt to thrive in 2018