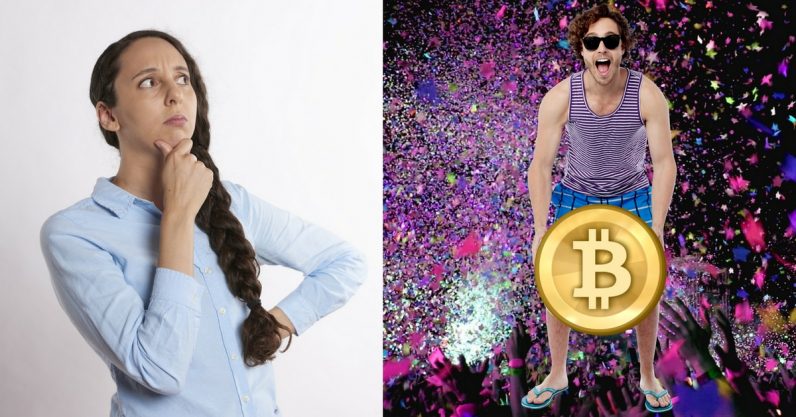 I use the term “Crypto” to describe the totality of what’s now possible via the “technologies” blockchain, cryptocurrency, smart contracts, and decentralization.

On June 29th, 2017, I saw the “Crypto Light”, by which I mean, one instant I saw the world one way, and in the next instant, my whole view of the world changed.

One moment I was trying to figure out if Crypto was a thing, and the next moment, I became certain that it was going to be the biggest thing to happen in the history of humanity.

When I saw the Light, I joined a tens of thousands of other people who have seen the Crypto Light. Many who saw it when it was far dimmer than when I saw it. I LOVE spending time with other Crypto Light seers and talking about the infinite number of ways that Crypto is going to make the world a more efficient and better place, particularly in Social Good.

And EVERY SINGLE DAY, for five months, as I learn new things about Crypto, many that blow my mind, I’m certain that Crypto’s going to be even bigger than I thought it was going to be the day before.

However, I’m aware that I can’t show people the Crypto Light.

Everyone has to see the Light as they go along their own life path, as they look through their own unique prism. As I wrote in a recent post “…. how do you help someone appreciate that an algorithm is more trustworthy than their government?”.

The way to optimize the opportunity to see the Light is to DO THE WORK.

Read and learn. It’s not easy. It’s hard work. It’s the densest thing that I’ve ever learned about.

But, to date, the time I’ve spent learning about Crypto has had the highest ROI of any time I’ve ever spent on anything in my entire life.

One way to start methodically doing the work is to follow the Top 50 writers on Medium on Crypto. Everyday you’ll get an email with a treasure trove of posts. Dive in. Immerse yourself, bathe yourself, in Crypto.

While I can’t show people the Light, I can help with frameworks.

I can bring new perspectives that enable some to see things differently, that might change the prism through which they try to see the Light. So, I’ve been working on this post for the last three weeks. While I’m still struggling to get the perfect post, I appreciate that perfect is the enemy of good. So here it is, three thoughts on Crypto perspective.

1) There’s nothing constant but change

Technology is always moving forward. Tech is always changing. The graphic below is a great representation of that tech dynamic:

So it turns out, that in tech, like most everything else, nothing is constant but change.

2. Crypto is a Gestalt Shift

What’s a Gestalt Shift? Well, let’s start with the drawing below.

What do you see? The first time I saw it, it was clearly a duck to me. It wasn’t until I read it was a rabbit, that I was able to see the rabbit (he’s looking up).

A ‘Gestalt Shift’ is when you look at something and see it one way, and then, with a different perspective (i.e. additional knowledge), you can look at the same exact thing, and see something totally different.

One moment I was looking at Crypto as one thing, and the next moment, I saw Crypto as something totally different. Seeing the Crypto Light was a Gestalt Shift for me.

Major H/T to Zack Hap for teaching me about Gestalt Shifts. Turns out, studying philosophy isn’t a waste of time.

If you appreciate that nothing is constant but change, and that there are Gestalt Shifts, I think you’re more likely to have the Crypto Light Gestalt Shift.

Before the internet, I felt that technology could make “anything” possible. I now think of that time as if I was seeing the solar system.

The solar system is massive. It’s about 20 billion miles across. Humans struggle to put 20 billion into any context.

But when I learned about the internet, I realized how limiting my solar system view was. The possibilities with the internet were so much greater than what I had imagined before. Everything was going to change. It was as if I suddenly realized there was a whole galaxy out there beyond our own solar system.

Our Milky Way galaxy is 100,000 light-years across. A light year is 5.9 trillion miles or 260 times longer than the solar system. What could be bigger than the Internet/Milky Way?

When I had my Gestalt Shift when I saw the Crypto Light, it was as if I saw the known universe for the first time:

Voting in a crypto world

While I picked voting as a topic, I could have used anything we do as humans and talk about how crypto redefines the possibilities.

One of the obvious things that will happen as voting goes on the blockchain, is that it’s the end of voter suppression. If the blockchain can solve for identity, and everyone has an identity, then everyone gets to vote.

Now think about what happens when you layer smart contracts on top of the voting.

First, as part of my identity, I can include my voting preferences. I’m pro-choice. I’m for stricter gun laws. I think climate change is a thing. Now when I go into a voting booth and give it my identity, it can vote for me.

But it’s so much more than that. What if a power company wants to build a power plant. I can have a smart contract that says I’ll vote yes for the power plant if they put six solar panels on my house and allow me to sell that electricity to my neighbors.

And we’ll have a DApp store for the Crypto voting platform, so anyone in the world can improve voting.

The possibilities are endless in voting, and not just in theory. Horizon State is leading the way in terms of bringing voting on to the blockchain and bringing those infinite possibilities to life.

No one reading this saw the Crypto Light as they were reading it. But I hope some people are a little more inspired to DO THE WORK.

Read next: The rise of adviser brands in the mobile customer journey