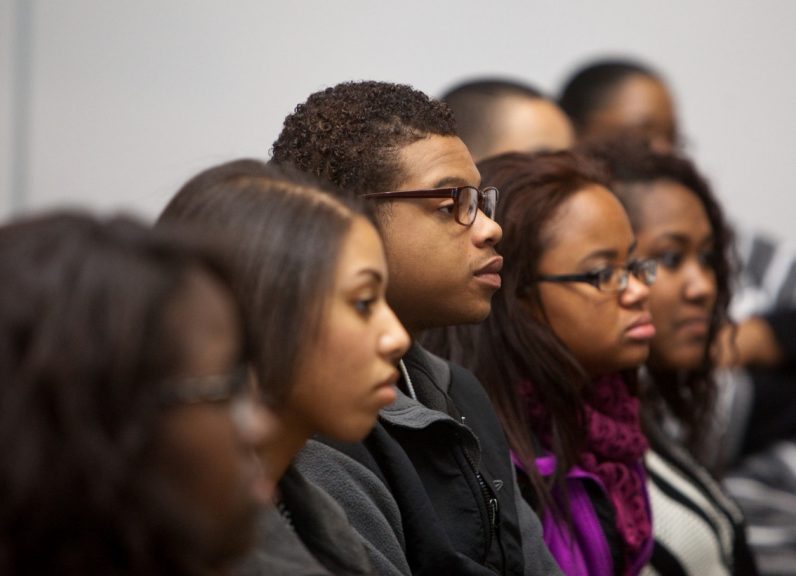 The summer of 2001, I found myself in a hotel conference suite hearing from a successful black businessman named Brian Morton share his career experience. Sitting in a room with 40 or so other students of color, I listened with eager expectation as he imparted wisdom about the world of business into which I would soon embark.

He was my first ever role model in the corporate world. He was the kind of person I knew I needed to be if I hoped to one day be successful.

I don’t remember much of what he said. That wasn’t the most important part anyway.

What I remembered was that, whereas I was accustomed to TV businessmen portrayed by white, middle-aged guys, I saw in Brian a young black man in his mid-20s who wore his hair in a short, neat cut, like me. He seemed like somebody I would go to church with on the account of his nice fitting three-piece suit. In fact, surrounding me were a bunch of young adults who were, like me, clad in business apparel. You would’ve thought we were in a worship service, all dressed in our Sunday best.

But we were not at church on that sunny summer Thursday. We were guests of INROADS, an internship program for minority youth, at a training summit held at the LAX Marriott. We were there to learn from former intern alumni and other business professionals.

It was not lost on me or the other interns that everyone else our age was at the beach, a theme park, or chillin’ at home; enjoying time before freshman year of college. It’s not that I couldn’t use a break. I had a tough four years of high school at the rigorous California Academy of Math and Science. I was on my way to achieving my lifelong dream of attending a four-year university.

I was preparing to take the next step of my life’s journey.

I figured I deserved a moment to celebrate the completion of an important milestone. But I also knew it was even more important to be here, surrounded by people like me — black and brown kids from all over LA.

Some were from where I’m from, the hoods of Compton, Watts, South Central, and East Los Angeles. Others came from nicer parts like Hawthorne, Torrance, and Baldwin Hills. Some were recently emancipated foster kids or first-generation college students.

Some were former abuse victims or children of single parents who worked two or three jobs to make ends meet. Some knew what it was like to be homeless or to sleep out of a car. Everybody had a story.

Whatever they had endured, they had made it this far. They were, like me, determined to forge a future of opportunity and privilege few of us ever had. We were the latest generation to endure life in the ghetto. And we were now poised to leave our own indelible impression on the world.

Many people wonder how I made it from the hood of Compton to Google, the world’s most desired employer. They wonder how to get more diverse people like me into thriving careers in tech. Naturally, I have God to thank for using INROADS to shape a large part of that story. But if you take a closer look, there’s an important detail that the tech world has, so far, missed.

Silicon Valley is home to some of the smartest, brightest, and most innovative minds in the world. Despite drawing top talent from universities across America and the world, tech companies still struggle to meet the growing demand for highly-skilled laborers. Moreover, they also want the benefits of diverse talent to better compete and stay innovative.

It is within this present context that I reflect back on that day listening to Brian. I had not realized at the time what my fellow students and I really represented. Perhaps he did. What many of us have accomplished since then — becoming leaders, managers, and executives — is astounding considering what we had to endure to get here. Astounding, remarkable, and most importantly, repeatable.

We were the answer.

The hood has plenty of smart, passionate, motivated people ready to prove that they too can be tomorrow’s innovators. For reasons including racism and classism, they only lack the resources and attention long poured into other communities.

Where I come from, folks survive with minimal resources, persevere despite daunting adversity, bring a wealth of diverse viewpoints, and work incredibly hard. They have the grit to succeed even if their skills are, for the moment, lacking.

I know plenty of people who are eager to learn how to code or work at a startup. They would be more grateful for the perks and privileges companies offer than the more well-to-do (I know I am).

For better or for worse, I feel these are some of the same reasons why companies have sent jobs overseas. Yet, they have bypassed the incredible talent in their own backyards. Why can’t we have a tech boom born in America’s long-neglected hoods and ghettos?

These are places in Silicon Valley like Oakland and East Palo Alto. These are neighborhoods in the East like Harlem and Detroit. These are suburbs of Los Angeles like Watts, Lynwood, and, of course, Compton. Tech companies could build pipelines in these communities as they have in other parts of the world.

While many in tech suggest that the lack of diversity is due to a pipeline problem, I now realize that INROADS has been building a strong pipeline of diverse talent for decades now. They have reached into underprivileged communities to find talent that exists in places tech companies are unwilling to look.

INROADS is not the only one to notice. Organizations like Year Up (yearup.org), Hack the Hood (hackthehood.org, Oakland, CA), and Teens Exploring Technology (exploringtech.org, Watts, CA) have tapped into these communities with great success over the years. They are already doing what many tech firms have been trying to do the last four years or so by themselves.

It’s about time that Silicon Valley learned from their success. Instead of reinventing the wheel, they should empower and learn from their example.

This article was originally published on Anthony's blog.