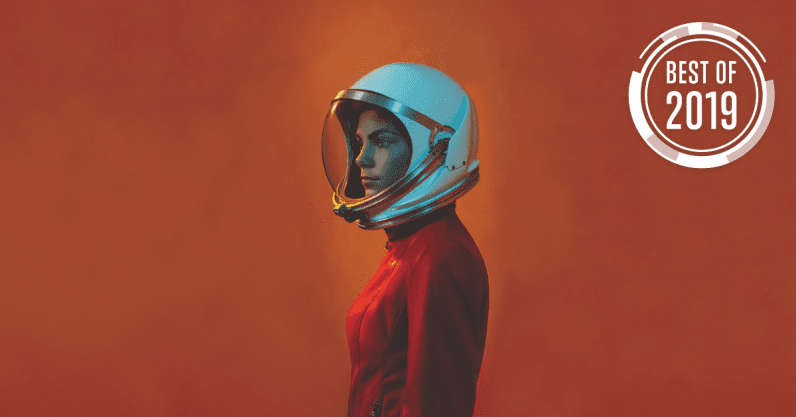 At just three years old, Alyssa Carson knew she wanted to be an astronaut, and since then, she’s worked tirelessly. Carson could soon become the first human to set foot on Mars — even if it means never returning back to Earth.

“My fascination with space all started when I watched an episode of the cartoon The Backyardigans called ‘A Mission to Mars,” Carson told TNW. “[In that episode] all the friends went on this imaginary adventure in their backyard which eventually brought them to Mars. I had the poster for that episode hung on my bedroom wall for years.”

Growing up, Carson’s imagination blew up with questions about space and space travel which eventually led her today, America’s best chance to landing on Mars. At 16 years old, Carson became the youngest person to have ever graduated from the Advanced Space Academy, the first person to have completed all of NASA’s seven Space Camps, and received the certification in applied astronautics. This officially makes Carson certified to do a suborbital research flight and venture into space, all before receiving her driver’s permit.

“Technically, I’m allowed to fly into space and just being able to say that, especially in my teens, feels amazing,” Carson said.

So far, the training Carson has done to prepare for a trip to Mars is with Project PoSSUM, a private citizen science organization which works in developing the Final Frontier Space Suit Design, EVA.

“We’re studying the earth’s upper atmosphere, and the ultimate goal is to have a suborbital flight into the mesosphere — the highest layer of the atmosphere,” Carson said. “We’ve done microgravity flights with spacesuits, water survival training with spacesuits to help with the development, decompression training, and we’ve learned about different G-forces by simulating them in airplanes.”

When will humans go to Mars?

A trip to Mars may only seem possible in an episode of The Backyardigans, but last year, NASA announced its plans to launch a mission to the red planet by 2030. Since Mars is in our solar system, it’s an obvious target for human exploration. Carson’s potential mission to Mars will involve searching for lifeforms, understanding the surface and the planet’s evolution, and preparing for potential future human colonization.

There’s been research into one-way trips to Mars including “Mars-One,” the Dutch organization hoping to establish a permanent human colony on the red planet. And more recently, NASA planned a return-trip using its rocket, Space Launch System (SLS).

The SLS mission to Mars — a 40-million-mile trip through a frozen expanse of dark and deathly emptiness — is where Carson plans to be by the time she’s 29. The harsh realities and risks of traveling to Mars don’t seem to faze Carson at all, not even the real risk of never returning to Earth.

On NASA’s planned return-trip to Mars, this means Carson would be away from Earth for approximately two to three years, and that’s not the scariest part. As Elon Musk, an aspiring carrier of Martian pioneers, said in 2016: “It’s dangerous and probably people will die.” On Monday, Musk said thermal rockets would be “a great area of research for NASA.” The SpaceX CEO highlighted how the alternative to rocket fuel could mean faster travel times around the solar system.

“The radiation levels in space don’t scare me because I’ve learned about it for so long and it’s just become a norm at this point,” Carson said. “There’s always a sense of fear that something could go wrong since no mission to space has ever been 100 percent safe. But I definitely believe that a mission to Mars, and all the benefits we can get from it, outweigh any of the risks.”

One of the main reasons to visit Mars is to colonize the planet since the world’s population could increase to 9.9 billion by 2050, according to a report by the Population Reference Bureau (PRB). But questions are being raised around whether humans deserve a second chance at inhabiting a planet given the current climate crisis we’re currently living in.

“It’s kind of ironic because the things we’re doing to Earth, that are actually very harmful to it, are exactly what we need to do to Mars,” Carson explained. “Since Mars is further away from the sun, it’s colder and we need to heat it up. We’re doing this on Earth pretty successfully so I guess we have that skill down.”

In the future, Carson hopes humans will inhabit multiple planets, including Jupiter. “Mars is our first level of learning how to live on new planets and developing those skills on how we can adapt to a new planet.”

Are we searching for aliens?

Our solar system is unfathomably big. In terms of the number of solar systems in the universe, there’s approximately 300 billion stars in the Milky Way, so if 10 percent of them have planets that means there’s around 30 billion planets in our galaxy alone. But that’s not all, it’s estimated that there are over 100 billion galaxies in the observable Universe for a total of something in the order of 10^21 (that’s 1, followed by 21 zeros) planets.

With all this (kind of) understood, it’d ignorant of us to believe we’re the only living intelligent life form in the solar system. “I definitely think the universe is too big for it to just be us,” Carson added. “There’s a possibility that bacteria lives on Mars, as well as liquid water, frozen water, and steam on Mars at the equator — this is part of the reason why we’re wanting to go to Mars.”

Other than potentially becoming the first human to visit Mars, Carson hopes her journey to space inspires other girls to follow their dreams. “When I was three and dreamt of being an astronaut and going to Mars, it was probably the most ridiculous dream I could have picked. But the more I’ve worked towards it, the more of a reality it’s becoming,” Carson said.

Read next: Johannesburg's power supplier gets the better of ransomware attackers