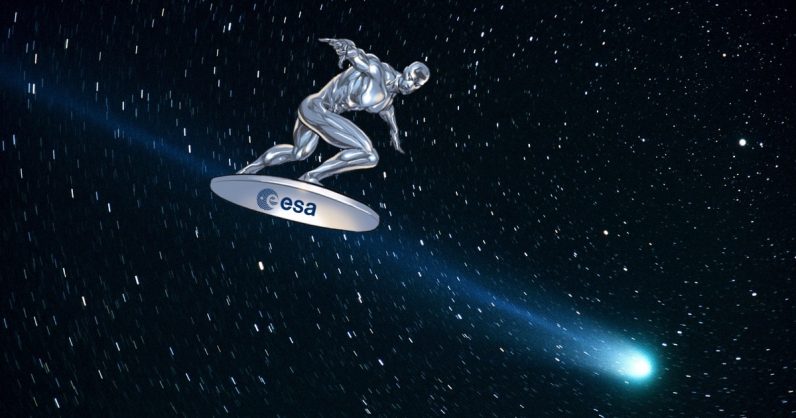 The European Space Agency (ESA) announced yesterday that it’s planning to make a ‘comet interceptor’ probe within the next eight years. The probe aims to capture details of a comet not seen before, when it enters our solar system.

The comet interceptor will consist of three spacecrafts: one main unit and two smaller units. All three speacecrafts will separate weeks before approaching the comet and capture different data about the object, object, like the make-up of its nucleus, gas, dust, and plasma environment. Scientists will use this data to create a 3D model of the celestial body, and use it to study origins of comets.

In its previous missions, ESA probes examined comets regularly appearing in our solar systems like Rosetta’s comet (occurs every 6.5 years) and Halley’s (occurs every 76 years). With the new probe, the space agency is expecting to study a comet from Oort’s cloud, a theoretical belt of celestial bodies that surrounds the outer reaches of the sun’s realm.

Günther Hasinger, ESA’s Director of Science, said the aim of the new mission is to explore previously undiscovered comets:

Pristine or dynamically new comets are entirely uncharted and make compelling targets for close-range spacecraft exploration to better understand the diversity and evolution of comets.

The space agency wants to launch the comet interceptor along with its exoplanet-studying Ariel spacecraft in 2028. To lead the project, ESA has chosen reachers from the UCL Mullard Space Science Laboratory and the University of Edinburgh.

Traditionally, comets have been ‘spotted’ a few months before they approach their closest point to the sun. But, ESA says that recent advancements in ground-based surveys mean that the sky can be scanned more deeply and provide a longer notice for comets. Even in that case, it would be hard to build and prepare a spacecraft in a few months or years.

So, with the comet interceptor, the ESA wants to be prepared for when researchers learn about a comet, and launch the probe when it’s approaching the sun.