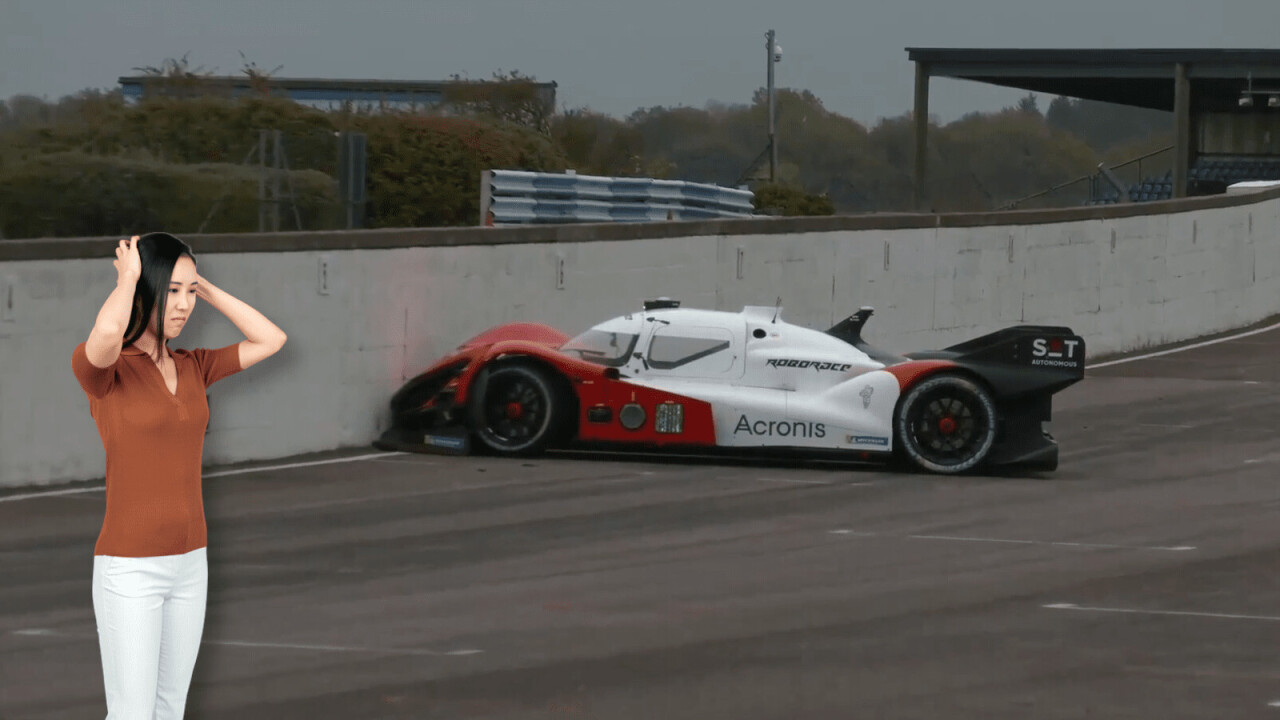 Autonomous vehicles will save us all! Self-driving cars are the future! …or, so I thought until I watched the following clip.

Before we get to that, a bit of background.

The video below is from a recent live broadcast of Roborace, the world’s first all autonomous full-scale motor race series. It’s a pretty simple concept: teams use their own electrically powered self-driving vehicles to race around real-life racetracks.

All teams use the same chassis and drivetrain, but are responsible for coming up with their own self-driving software to actually drive the car. Like all other motor races, the fastest wins.

It’s been around for a few years already, and it seems it’s still got a little way to go before the cars are, uhm, finished.

Earlier this week, at one of the race’s live broadcasted events, the vehicle from team Acronis SIT Autonomous, was waiting on the grid. Situation normal.

However, immediately after taking off from the line, it crashed into a wall that runs alongside the home stretch. Obviously, no one was hurt. See it for yourself below.

This is one of their first live-broadcasted events.

This was the second run.

It drove straight into a wall. pic.twitter.com/ss5R2YVRi3

You’d think getting an autonomous car to drive safely around a track wouldn’t be all that difficult, at least compared to other challenges self-driving car tests are facing. On a racetrack, there are no intersections, pedestrians, or other drivers to navigate. The road surface and conditions are also much more manageable and the boundaries between what is track and what isn’t, is clearly demarcated with white lines, grass, and walls.

Though it’s worth mentioning that these clips come from Roborace’s Beta season, in which teams compete to post the fastest time of three-lap time-trials around real world tracks which are also littered with virtual objects. It all comes together to create some kind of mixed reality race, which Roborace calls its “metaverse.”

You can see that in action in this clip from the race series over on its Twitch channel.

However, an individual claiming to be one of the engineers from the Acronis SIT team took to Reddit after the race to clarify what happened. They said the issue actually occurred on an initialization lap, when it was being shown round the course by a human driver.

Apparently, after the sighting lap, the steering value returned a NaN (not a number) value, which is computer speak for, something done screwed up. When it came to launching the car off the line in autonomous mode, it locked the steering to the right to compensate for the NaN value.

After watching a bunch of Roborace clips, it seems the crashes and spins are freak accidents, as they are in any motor sport. The only difference is that because algorithms control the cars not humans, the crashes (like the one above) can happen in the most inhuman and hilarious ways possible.

Given this has happened within a few weeks of Tesla launching its Full Self Driving beta, let’s take a moment to remind ourselves just how difficult it is to make a car drive itself. Good job this happened on a closed track and not on the streets among the public!