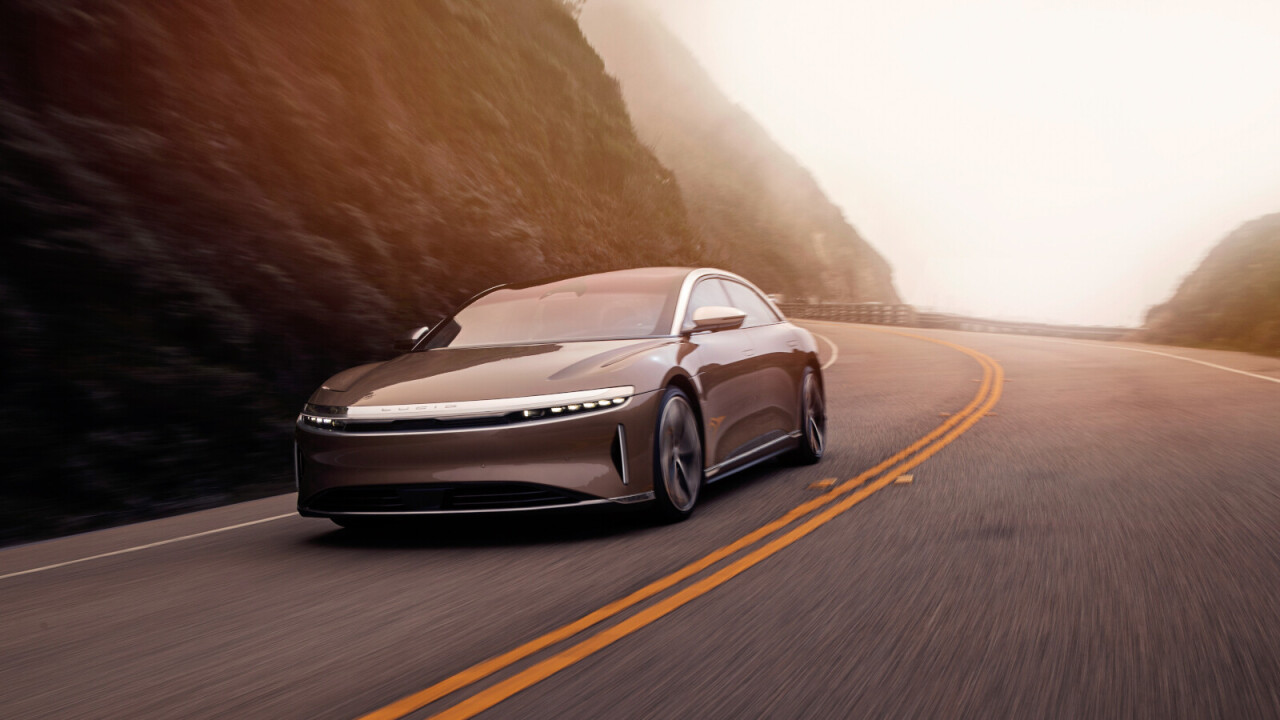 Pretty much every electric vehicle that comes to market at the moment is compared to Tesla. That’s mostly because it’s the main option, it’s got a car for most core markets, and it regularly bests the competition in games of EV Top Trumps.

Of course, there’s a lot more to what makes a car good than how fast or far it goes, but the EV that’s just been officially unveiled, the Lucid Air, might just redefine the top line benchmarks.

[Read: Turns out Nikola won’t build its Badger hydrogen EV truck after all — GM will]

Over the past few weeks, in the run up to the Air’s official unveiling, Lucid has bragged about various world-beating features. Those claims just took one big step closer to becoming a reality today, after the company officially unveiled its debut vehicle, the Air. Let’s take a look at what we know.

It’s going to cost $80,000 and first deliveries will begin in Spring 2021, so we don’t have to wait that long before we see them on the road. Bear in mind, you’ll have to wait until 2022 for an $80,000 model, the more expensive variants are coming to market first, but more on that later.

In terms of price, it competes squarely with the likes of the Tesla Model S. While Lucid Motors is aiming for the luxury market, there’s not much on the market to compare it to so reviewers will no doubt look to draw parallels.

The Lucid Air is fast

According to Lucid, the Air is going to have an insane 1080 hp in its dual-motor setup. That should be capable of running a quarter mile in under 10 seconds.

It has a massive battery pack

Lucid says that it has the lowest drag coefficient of any luxury car, too. This might go some way to explaining how it gets such good range. Lucid says its drag coefficient is 0.21, the Tesla Model S’ is somewhere around 0.24 (in this case, lower is better). A car that cuts through the air easier needs less power to do so, hence the impressive range.

Lucid also says that it’s going to be the fastest charging EV in the world, which will be a boon for long-distance travelers. The company hasn’t mentioned the minute technical details of how it achieves this, but you’ll almost certainly have to plug the Air into an ultra-rapid EV charger rated to at least 200 kW. In fact, it’ll more likely have to be a 300+ kW charger.

The only issue is that those are quite hard to come by right now, so early adopters might have to wait to take full advantage of this feature. Whatever the case, Lucid says that at peak power it can add 20 miles per minute spent charging. In reality, Lucid says that should convert to around 300 miles of range added in 20 minutes. If anyone has range anxiety, with the Lucid Air that should be a thing of the past.

The passenger experience is going to be quite unique. As some new EVs are looking to Google for their in-car entertainment systems with Android Automotive, Lucid has gone to Amazon and will integrate Alexa into the vehicle.

As with cars that use the Android system, like the Polestar 2, drivers and passengers will be able to ask the car to do a host of things like make calls, navigate, and change the temperature in the cabin. More features will be added using OTA updates.

For the driver, there’s going to be a 34-inch 5K cockpit display that hovers above the dashboard the width of the vehicle. There will still be some physical buttons to control certain vehicle functions, including familiar steering wheel-based audio controls.

If you are still clambering for more world records, the Lucid Air will also have the world’s largest frunk of any EV, that’s a trunk in the front. More space for bags.

If you haven’t kept up with Lucid and the Air’s development, the short story is that the company is run by a host of former Tesla engineers. It’s headed up by Peter Rawlinson who was the lead Model S engineer as it happens.

The main innovation that Lucid is claiming to have made is a widely seen technology phenomenon, in that it has focused on increasing efficiency of electrical components and making them smaller. It sounds simple, but the benefits affect the entire vehicle.

Having smaller motors means there’s more space inside the car for passengers, that frunk, and batteries. All in, it’s allowed Lucid to push the envelope just enough to stand out from the crowd in many important areas for EVs like range, speed, and charging capability.

The Lucid Air is going to be available in four different spec levels. The first one to market — coming in Spring — is the Lucid Air Dream Edition. It’s the flagship, it’s the most expensive, it’s the all singing all dancing version with the most power and the most luxury. Although, all that extra power — and weight — does bring its range down to 465 miles on 21-inch wheels, on 19-inch wheels the range is 503 miles. Its list price (before subsidies) is $169,000. That puts it in a whole new space beyond the Model S.

The next model made available will be the Lucid Air Grand Touring. That’ll have a list price of $139,000 and will be available in mid-2021. This will be slightly less powerful, putting out just 800 hp but will still do 517 miles on a full charge.

By 2022, the base-spec Lucid Air will be available and will cost $80,000. Lucid are yet to say what its range and power will be, though. Presumably, it’ll have to be pretty similar to the Touring model, otherwise it’ll be basically the same as a Model S.

It’s understandable that Lucid hasn’t disclosed the range of its base level car yet, as technology will move on, and in two years time, there will almost certainly be more EVs on the market that have over 400 miles of range.

The Lucid Air is no doubt going to ruffle a few feathers in the EV world, and in a good way too. It’s a unique proposition, one that is out of reach of most average drivers sure, but hopefully the tech will trickle down to more affordable vehicles in the future.

If you want to experience some of those world beating features Lucid has been bragging about so far, you’re going to have to pay for them. But for now, here’s a bunch more pictures of it.