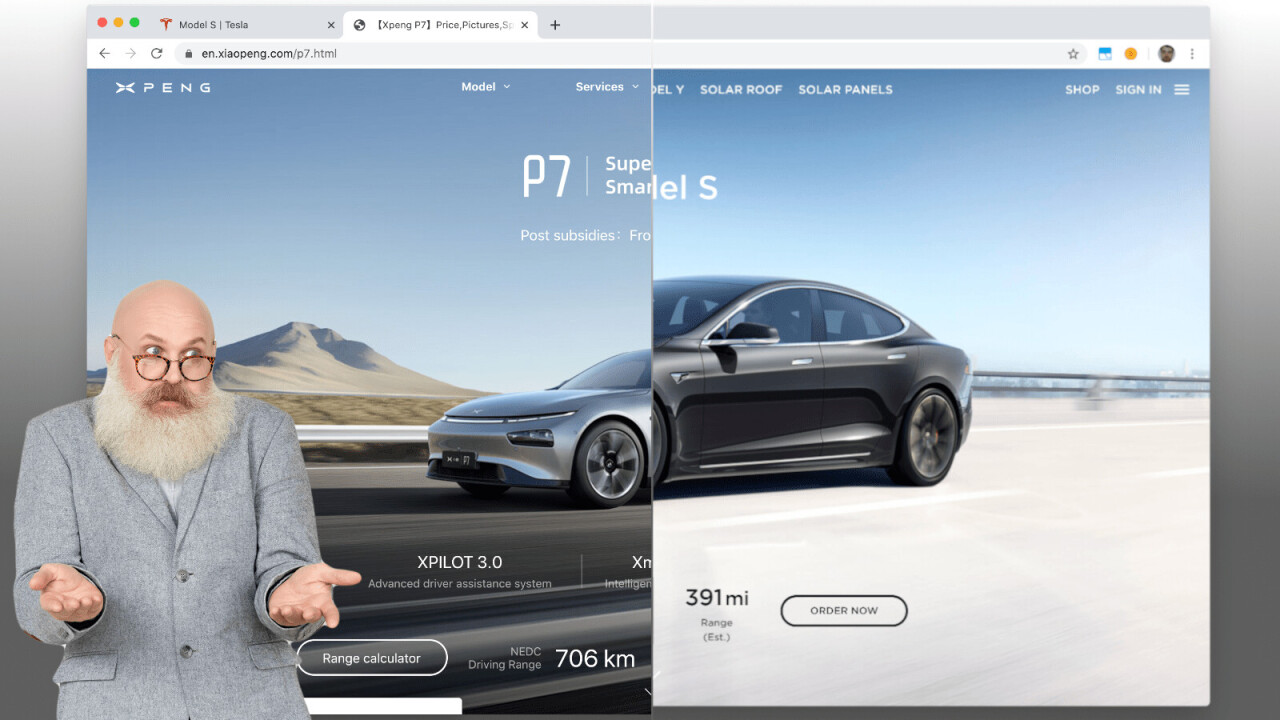 Chinese carmakers taking too much inspiration from western brands isn’t exactly a new phenomenon, but one China-based EV maker has zero-chill and is now even copying Tesla‘s web design.

[Read: UK automotive production at lowest level since WW2, to cost industry $15B]

Spotted by an unnamed individual, who then tipped off Electrek, Xpeng appears to be copying Tesla‘s website design. I say appears, but take a look a the screenshots below and decide for yourself.

The similarities are clear. Putting the actual vehicles to one side, the website shows the car moving swiftly against a cloudless blue sky. The name of the vehicle is in the same place: above the vehicle. The brand names are both in the top left of the page, too.

Key statistics are then displayed below the hero vehicle in the image alongside buttons to learn more about the car’s spec or order buttons. The buttons are even the same shape. Scrolling down, it’s largely the same story.

An archived version of the Xpeng website shows that its design used to be very different.

What makes this even more surprising is that Tesla and Xpeng are currently in the midst of a lawsuit over their advanced driver assistance systems (ADAS), called Autopilot and Xpilot respectively.

In 2019, Tesla started legal proceedings against Xpeng on the basis that it believed the Chinese brand had stolen parts of its Autopilot source code. The case was against Guangzhi Cao, a former Tesla engineer who now works for Xpeng.

The case claims that Cao downloaded the Autopilot source code and sold it to Xpeng when he started working at the Chiense EV maker. Cao denied the claims, saying that he did download parts of the code but deleted it before starting work at Xpeng.

However, last year, Tesla doubled down on its lawsuit after it found similarities between Cao’s case and a previous case involving a former Apple engineer. In both cases, Tesla claimed the individuals were recruited by the same person on the premise of obtaining trade secrets. Cao’s case is currently ongoing.

Chinese automakers taking design liberties from western brands isn’t a new phenomenon, in fact there was a whole episode of Top Gear dedicated to it. Chinese companies are often able to get away with copying designs as the country’s government doesn’t really enforce copyright infringement laws and the products aren’t often sold outside of China.

It’s totally likely that nothing will come of Xpeng copying Tesla’s website. However, if Tesla can successfully prove Xpeng copied its Autopilot source code things might be forced to change. Whatever the case, Xpeng doesn’t seem too worried about the whole ordeal.