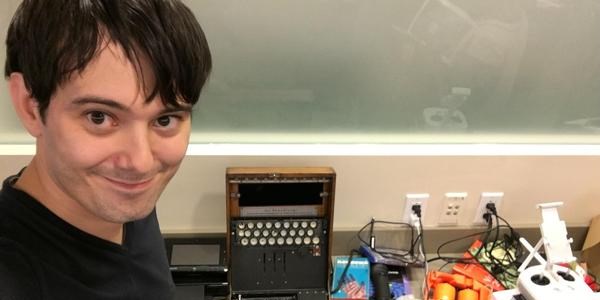 UPDATE: ‘Katie’, the woman from Florida who bid to hit Shkreli in the face, has since resigned her bid.

Earlier this week, former Turing Pharmaceuticals CEO Martin Shkreli, offered one lucky bidder the chance to punch him in the face, for a price. Bids, he said, were as high as $78,000. Then again, Shkreli lies (and people punish him with lube).

For some reason, the $78,000 bid fell through (or never existed in the first place) and Shkreli went with a backup option, a $50,000 bid from a Florida woman known only as ‘Katie.’ She also requested to ‘repeatedly pummel him in the face,’ a request he granted.

The notorious ‘pharma bro’ fell into the limelight last September when, as CEO of Turing Pharmaceuticals, he hiked the price of an HIV drug, Daraprim, 4,000 percent. Shkreli told The Washington Post:

I can see how it looks greedy but I think there’s a lot of altruistic properties to it. With these new profits we can spend all of that upside on these patients who sorely need a new drug, in my opinion.

For his part, Shkreli claims the increase wasn’t at all greedy, and was instead a move to bolster sales and shift profits to on-going research for other life-saving drugs. Turing Pharmaceuticals, his former company, has even offered the drug at a steep discount — or free — for the uninsured, or those that can’t afford it.

While the Daraprim hike doesn’t have much of an impact on the bottom line of major providers now (only 2,000 Americans use the drug), the precedent could lead to other drug companies taking similar steps in the future, a move that places an enormous burden on the entire system — and one that we’re already seeing.

Unfortunately, the issue isn’t as clear-cut as a greedy CEO raising prices. It’s a nuanced issue that pokes holes in the system as a whole, not a single provider of drugs. Shkreli, while near-universally hated, does speak with shades of truth when describing the move, although ‘shades’ are about as far as it extends.

For a Florida woman, though, she’ll get to do what most of America wants to: punch the former-CEO in the face.

The philanthropic gesture is Shkreli’s homage to his former PR consultant, Mike Kulich, who died in his sleep Saturday morning. All proceeds will be matched by Shkreli, and donated to Kulich’s family.

Read next: Nvidia's AI learns to drive by watching humans