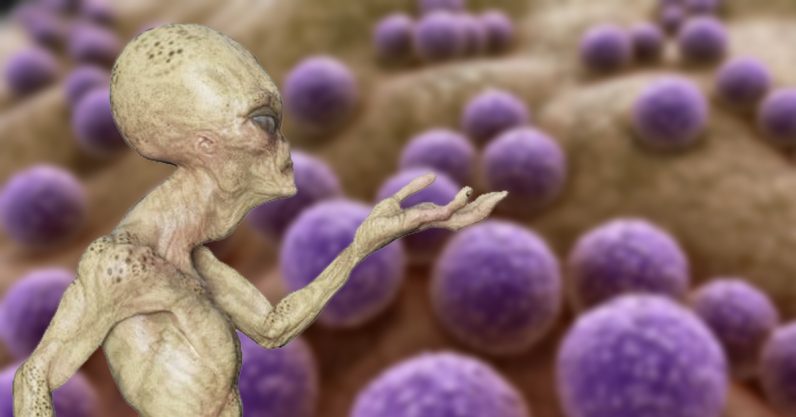 Panspermia means “seeds everywhere,” and the concept represents the idea that life on Earth may have been seeded by biological lifeforms from outer space. This long-controversial idea recently received some experimental support from a new study out of Japan.

These extremes of life were tested utilizing the International Space Station to examine how microbes might live in the extreme conditions of space.

“The origin of life on Earth is the biggest mystery of human beings. Scientists can have totally different points of view on the matter. Some think that life is very rare and happened only once in the Universe, while others think that life can happen on every suitable planet. If panspermia is possible, life must exist much more often than we previously thought” Dr. Akihiko Yamagishi, researcher at Tokyo University of Pharmacy and Life Sciences, explains.

These bacteria are really fly…

In 2018, Dr. Yamagishi and his team collected Deinococcal bacteria floating 12 km (7.5 miles) above the earth. These microorganisms are known to come together in balls as large as one millimeter (1/25 inch) across, protecting them from UV radiation.

[Read: Astronomers think our Sun may have a long lost twin]

This hardiness suggested to researchers that these tough bacteria might be able to sustain the rigors of space.

Back home, researchers rehydrated the bacteria, and tested the samples. The thinnest layers of bacteria had been utterly destroyed by the experience, having their genetic material completely fried by ultraviolet radiation. In 2015, NASA astronaut Scott Kelly affixed pellets of Deinococcus (stored as various-sized pellets inside aluminum wells of an aluminum plate) on exposure panels outside the International Space Station. These microbes were exposed to the harsh environment of space for periods of one, two, and three years before samples were returned to Earth.

Samples of half a millimeter to a millimeter in thickness showed significant damage from exposure to space. Most of the samples were killed by the loss of water and UV radiation.

All samples thicker than half a millimeter (1/50 inch) thick showed roughly four percent of microbes survived through their ordeal. As microbes on the outer layers of the samples perished, they created a barrier protecting the rest of the colony.

“We exposed the microbial cell pellet with different thickness to space environments. The results indicated the importance of the aggregated form of cells for surviving in the harsh space environment. We also analyzed the samples exposed to space from 1 to 3 years. The experimental design enabled us to get and to extrapolate the survival time course and to predict the survival time of D. radiodurans,” researchers describe in an article on the experiment, published in Frontiers in Microbiology.

Researchers calculated that any pellet with a diameter greater than half a millimeter (1/50 inch) would survive for between 15 and 45 years on the outer skin of the orbiting space station.

Calculations show a colony twice that thick (roughly the width of a dime) would protect microbes for up to eight years traveling in space — far more than enough time to travel from Mars to Earth.

One variation of the panspermia idea, lithopanspermia theory, suggests microbes may hide within the rocky confines of asteroids, protected from the often-damaging effects of radiation.

One of the great questions of Panspermia is this — once life develops on one planet, how does it travel to another world? Meteorite impacts could, occasionally, lift life-laden rocks into space. Some material from other worlds, including Mars, has been known to land on our own world.

In 1996, news agencies around the world ran stories of an announcement of a possible sign of ancient Martian life in the asteroid Allan Hills 84001, a piece of Mars which crashed into Earth 13,000 years ago, following a 17-million-year-long journey. This evidence for alien life was later found to be inconclusive.

This new study shows that even without shielding from rocks, microorganisms may be protected from radiation and wild swings in temperature by huddling into balls. This idea — massapanspermia — could explain how the microorganisms could survive in space without needing to be shielded by layers of rock.

Life is resilient, and is found in even the most extreme conditions on Earth. Recent studies suggest that radiation may even play a part in supporting life processes, perhaps making life more likely than we thought in the subsurface of Mars and other worlds.

This study might also provide a new look at our own world, showing how life may have developed right here on Earth.

Read next: Boost your productivity with Gmail’s canned responses