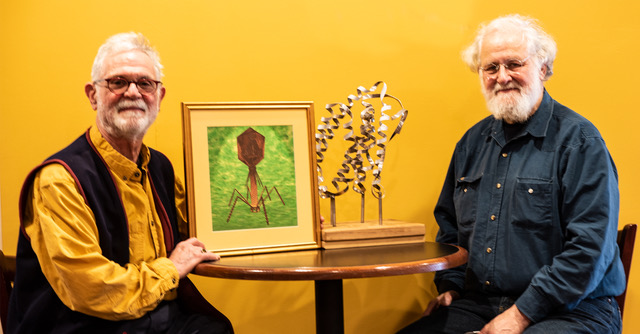 When people submit their DNA to companies such as 23andMe for testing, they’re usually not too surprised to find out they have relatives they haven’t met. But, it’s a bit different when you realize you have a cousin who works in the same field, shares some colleagues and friends, and once collaborated with you on research that appeared in a science journal back in the 1970s.

Byron Rubin and Bruce Gaber aren’t your average, run-of-the-mill septuagenarians. Rubin’s a PhD scientist and an incredible sculptor who works with metal to produce amazing recreations of molecular structures. Gaber is also a PhD scientist and a gifted scientific illustrator whose work has been featured on the cover of numerous science journals. The amount of overlap in their work and passions is incredible.

And, depending on your views on nurture VS nature, it makes perfect sense: they’re cousins. Gaber and his daughter, Mi-Ai Parrish, sent off DNA to a consumer genetic testing company called 23andMe to get some information for the family tree. According to Parrish, they got more than they expected when they saw the results. She told TNW:

I was looking at the 23andMe coding one day and saw there was a match for me, for a second cousin who was clearly not on my mother’s side. It had a name. So I started to research whether I could find someone by that name who potentially would match being my father‘s cousin. It didn’t occur to me that it would be on his paternal side, which was the side that we never thought we would know anything about.

That last bit is important because it turns out that Gaber was adopted and had only recently tracked down and spoken with his birth mother via mail correspondence, a conversation in which he was asked to stop contacting her.

He actually was able to track her down and contact her on a kibbutz in Israel before she died. She gave him a very small amount of info, including his birth father’s first name. But asked that he never contact her again, so he stopped looking.

When Parrish realized her father may have a paternal cousin he’d never met she set out to contact the person. According to her:

When I started to research the Byron Rubins in the universe, I found a man who was so similar to my dad in background and interests and career as well as being of a similar age and having been born in Chicago, then I felt I probably had found his cousin.

Byron Rubin, it turns out, was the right man. Rubin and Gaber met in person for the first time a few weeks later. TNW spoke with both men and found out there’s more to the story than just two cousins with lots in common. Rubin was also able to help Gaber determine who his paternal father was – ending a mystery that’d persisted for more than 70 years.

Today, they’re both grateful to have met one another. The uncanny similarities they share, including a life-long love for science, and the fact that both are master artists continues to delight them both. Rubin, who was surprised to learn just a week ago that Gaber also works in metal sculptures, told us he found it astonishing how “amazingly parallel” their lives were.

When asked if they ever had any concerns over sharing their DNA with a company that could, potentially, give that information to a 3rd party they both shrugged off any concerns. Rubin said:

It doesn’t bother me if they take my information out of the data and then combine it with other data. That’s good for science. They can use that data to discover things. I’m okay with that.

And, for his part, Gaber agreed, telling us “I feel the same. If it can help science, I think it’s a good thing.”

Thanks to 23andMe, two kindred spirits were able to connect and learn they were cousins. And one of them even discovered the name of his father after more than 70 years of searching. Technology is what you make of it, but it feels like a win for humankind and science when we come across a heartwarming story like this one.