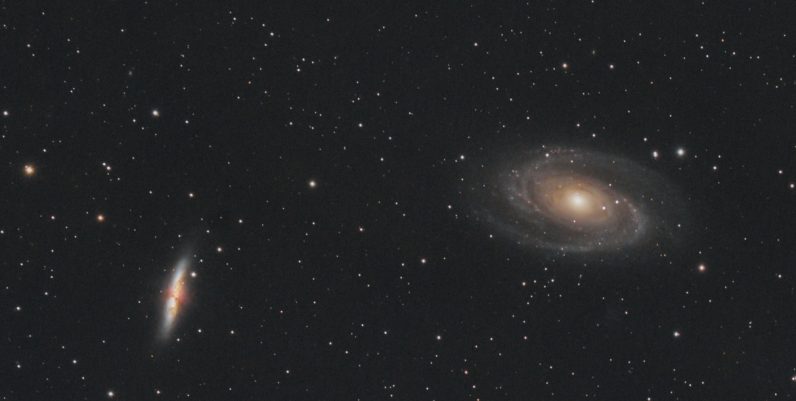 Astrophysicist Dan Hooper thinks we’ll eventually have to wrangle the stars in our night sky, like wayward cattle straying from the herd, in order to keep the lights on. This is because the universe is constantly expanding and pulling stars with it. If he’s right, his logic would apply to all intelligent life in the universe — and could help us find aliens.

Ask anyone who believes in extra-terrestrial intelligent life why, after thousands of years, we haven’t located aliens and they’ll tell you that we’re just not looking in the right places (or that we have, and the government is covering it up, but that’s a different story).

But how do you know where to look for life? Standing on Earth and casting our gaze outward is like climbing a two meter ladder in Florida to get a better look at the pyramids in Egypt. And sure, we’ve got fancy scientific tools and the ability to send signals deep into space, but so far the message-in-a-bottle has proven a more reliable communication method.

There’s always the idea that there aren’t any aliens out there, but it turns out that’s not a popular theory at all. Hooper’s theory, according to his white paper, has to do with a super cool technology that hasn’t been invented yet called Dyson spheres. He reckons that we’ll need to figure out a way to sustain a galactic civilization in the future, and going from planet to planet draining resources like the bad guys from the movie “Independence Day” probably isn’t sustainable.

Dyson spheres are the solution to that problem. Rather than crack open the rest of the planets in our galaxy (and the other 52 nearby) and use them up like we’ve done to Earth, Dyson spheres turn stars into power plants. Basically, the idea is that we’re using only a tiny fraction of any star’s heat to get things done. If we built a giant building around a star we could harness a lot more of its energy — sounds easy enough.

Here’s where things get apocalyptic and strange. In Hooper’s recently published white paper he states:

On timescales of tens of billions of years and longer, the expansion of the universe will ultimately limit the ability of an advanced civilization to accumulate and consume useable energy, a fact that has only been exacerbated by the discovery of dark energy.

So, if we don’t figure out how to build Dyson spheres, our entire civilization could be wiped out in tens of billions of years. The paper continues:

Given the inevitability of the encroaching horizon, any sufficiently advanced civilization that is determined to maximize its ability to utilize energy will expand throughout the universe, attempting to secure as many stars as possible before they become permanently inaccessible.

Perhaps aliens are already dealing with their stars straying off and using Dyson spheres with giant thrusters to drive them back toward the center of their galaxies. Don’t take my word for it — according to the white paper:

It is of course possible, however, that life has already evolved elsewhere in our universe, and that civilizations far more advanced than our own may already exist within our Hubble volume. If this is the case, then they may have already begun to collect stars from their surrounding cosmological environment, altering the distribution of stars and leading to potentially observable signatures.

The big idea here is that if we go around looking for Dyson spheres made by other civilizations we’re still looking for a needle in a haystack. But, if we look for the evidence of an advanced civilization that’s harvested stars, it’s a bit easier because we’re actually looking for the biggest stars out there.

Moving a star around with a fancy Dyson sphere space-tractor would likely be a time-consuming affair, so scientists will have to pick the right stars. They’ll avoid the biggest ones because those burn out too fast. And that’s why we should be looking for fields that consist of an odd arrangement of mostly large stars: they’d be the leftovers after aliens pulled all the useful ones towards their civilization’s center.

So, if you want to find aliens, all you have to do is figure out which stars are missing and where they went. The real question is: why aren’t the aliens finding us? Don’t they know we’ve got tacos?