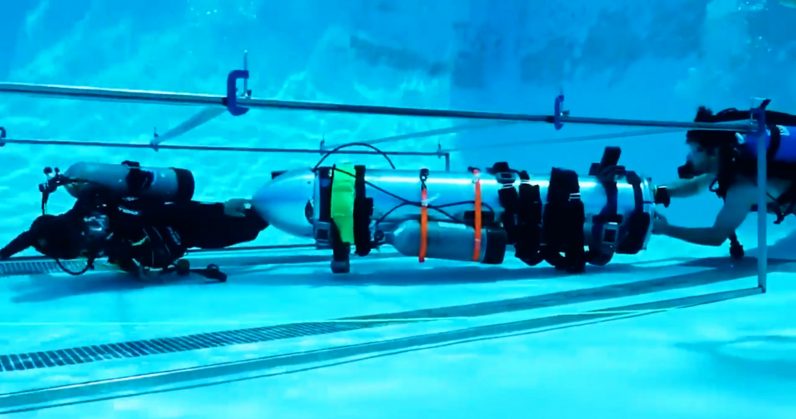 The world has been watching closely as a mission to rescue a soccer team of young boys in Thailand from a flooded cave is underway. Last week, Tesla and SpaceX CEO Elon Musk offered his support by promising to have a “kid-size submarine” built – and he came through with the help of engineers in his employ.

The idea is to turn a “liquid oxygen transfer tube” from a SpaceX Falcon rocket into a submarine that would be light enough to navigate through narrow gaps in the complex cave system, and be carried by two divers. The submarine can fit a person inside with their arms crossed, so it can be used to safely extract the soccer team one at a time.

In the clip shared by Musk above, you can see the submarine being tested by a team of divers at a high school pool in Los Angeles. And in the clip below, you can see a person emerging from the small escape pod, which measures just over 31cm (12 inches) in diameter.

The team of 12 boys, along with their coach, have been trapped since June 23, after they entered the cave – a popular local attraction – to explore it. Following torrential rainfall, the cave was quickly flooded and the group had to move several kilometers inward to find dry land.

Getting out would require waiting several weeks for the water level to drop, or swimming back to the entrance. The latter option is extremely dangerous, and the arduous trip caused the death of a former Thai Navy SEAL as he lost consciousness underwater while placing extra air tanks inside the cave to allow other rescuers to reach the group.

The submarine may or may not be necessary: at the time of writing, rescuers have already managed to extract four boys from the cave. While that’s gone well, there’s still a high chance of more rain in the area, and the mission plans could be affected over the course of the next several hours – and that will determine whether or not the escape pod will find use in this endeavor.

Regardless of how you feel about Musk lately, it’s good to see a bigwig in tech swinging into action to help people in need in a meaningful way like this. That’s a leaf worth taking out of Musk’s book. Hopefully, other CEOs are listening.