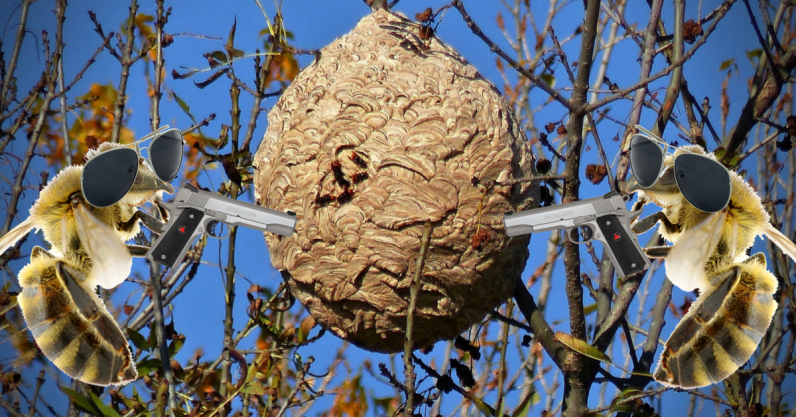 Bees and other pollinators are pretty important to, you know, life as we know it. Unfortunately, things aren’t always rosy for our buzzing friends. Aside from habitat loss, parasites, and pesticides, they also have to deal with a burgeoning population of bee-eating Asian hornets. But humanity might’ve found a solution: radio-tracking.

In a world first, scientists from the University of Exeter have attached tiny little tracking tags to Asian hornets, allowing them to follow the creatures back to their hives and, uh, mercilessly crush them.

The technology was tested in the south of France and Jersey, where there are already established Asian hornet colonies. The trial was successful as they found five undiscovered nests. Experts are hoping that this technique will prevent a large scale outbreak of the insects in the UK.

In order to attach the radio tags to the hornets, scientists used the smallest trackers available, which were made by Biotrack. They then used sewing thread to attach the technology to the Asian hornets, which were able to carry the tags as long as they weighed less than 80 percent of their own bodyweight. When you think about it, being able to carry 80 percent of your own weight around is pretty hardcore.

Asian hornets attack bees by hovering outside of their hives, grabbing them from the air, and dismembering them, before taking the bees’ disfigured body parts back to their own nests. To be honest, that’d make a great metal song.

“It is vital to find the nests early in the season to prevent the hornet spreading, as later in the year hundreds of new queens emerge and disperse from each nest, each with the potential to make new nests,” Professor Juliet Osborne, Director of the Environment and Sustainability Institute and co-author of the study, said.

Nicola Spence, Defra Deputy Director for Plant and Bee Health (one of the organisations that helped fund the project) also chimed in, saying: “This work is key for ensuring a rapid response to Asian hornets when sightings are confirmed, and in future bee inspectors will be able to use this technique to take swift action.”

Read next: Mindbliss helps you reach zen via AI for under $50