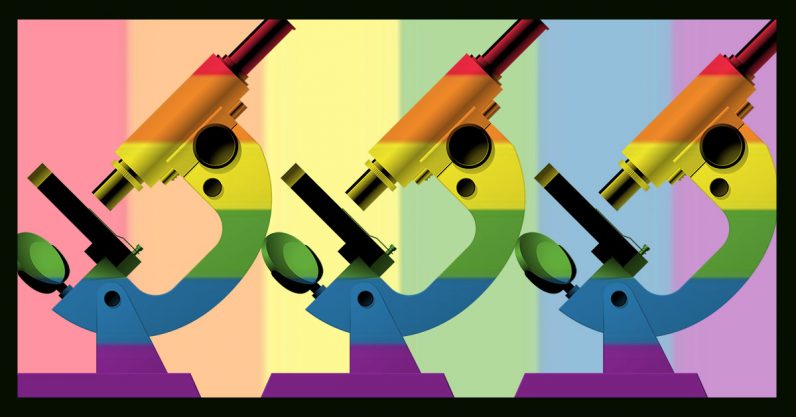 According to a survey last year, 54 percent of US Republicans believe in demons and 46 percent believe in ghosts. I mention this because, among members of the same group, only 44 percent surveyed believe in transgender rights.

I haven’t found any data on what percentage of people “believe in” the existence of transgender and other queer people. But there is a near-infinite supply of anecdotal evidence indicating a large number of people – primarily conservatives – believe that some queer and transgender people aren’t supported by science.

These people are wrong. Science clearly, unequivocally, without a shred of doubt, supports intersex and transgender biology, genderqueer brains, and a tapestry of sexuality identities.

Here’s a 2015 paper written by an international team of researchers from reputable institutions including the Max Planck Institute and the University of Tel Aviv. These scientists write:

Here we show that, although there are sex/gender differences in brain and behavior, humans and human brains are comprised of unique “mosaics” of features, some more common in females compared with males, some more common in males compared with females, and some common in both females and males. Our results demonstrate that regardless of the cause of observed sex/gender differences in brain and behavior (nature or nurture), human brains cannot be categorized into two distinct classes: male brain/female brain.

Historically speaking, the idea that trans and other queer identities aren’t scientifically sound is a relatively new development. The advent of modern religion codified the idea that relationships which aren’t explicitly heteronormative are morally wrong. But people representing every letter of the queer alphabet (LGBTPQIA+) have existed since the dawn of time.

Queerness was not only accepted throughout the majority of human existence, in many cultures it was celebrated. Recall the ancient Romans who worshiped Cybele and Attis. Many of these priests, considered early transgender figures, would undergo transition procedures. They were referred to as castrati at the time, but as Vice’s Siobahn Ball wrote:

It is impossible to attempt to divine the gender identity of individuals after their death, especially when they came from a culture that constructed gender differently from our own. However, it is a reasonable assumption that, while some of the priests may well have been cis men who felt the divine call, many others were trans feminine people who recognized themselves in Cybele’s priesthood and found a space in which to embrace their true identity.

And who could forget the amazing tale of the 300 brave warriors who bled at Sparta?

No, not those warriors. That’s a different 300, the one that fought Xerxes at Thermopylae in 480BC.

I’m talking about the real 300: the Sacred Band of Thebes. They were an elite Thebian military fighting corps composed of 150 pairs of male lovers. How elite were they? Here’s a passage from an Encyclopedia Britannica entry on the group’s leader, Pelopidas:

…was the leader of the Sacred Band, a selected infantry body of 300, which routed a large Spartan force at Tegyra (near Orchomenus, Boeotia) in 375 and distinguished itself in the defeat of Sparta at the decisive battle of Leuctra (371).

In other words: the Sacred Band defeated the Spartans just a century after Leonidas and his 300 had their last stand. Someone should make a movie about that.

It’s intrinsic that we view science through a historical lens if we don’t want to get truth confused with religious morality. Because according to science, gender and sexuality aren’t binary.

Here, researchers from the Medical College of Georgia at Augusta, working with Yale, discuss an endocrine-related explanation for gender dysphoria:

“It doesn’t matter which sex organs you have, it’s whether estrogen, or androgen, which is converted to estrogen in the brain, masculinizes the brain during this critical period,” says Dr. Lawrence C. Layman, chief of the MCG Section of Reproductive Endocrinology, Infertility and Genetics in the Department of Obstetrics and Gynecology. “We have found variants in genes that are important in some of these different areas of the brain.”

It’s important, for any good faith conversation to happen, that people understand that gays, lesbians, bisexuals, non-binary, genderqueer, and transgender people are not new. Being trans hasn’t “become popular” as many people now claim. Occam’s Razor tells us that we’re just hearing more about these subjects because we’re all connected by the internet. Just like police brutality didn’t start when smart phones got cameras, queerness did not begin when Caitlyn Jenner came out.

The science goes beyond just confirming that trans and non-binary individuals are in reality exactly what they say they are. Because when you switch from studies of the brain and endocrine systems and go straight for hard biology, it becomes even clearer that queerness is not only natural, but imperative in nature.

Experts at the Imperial College in London agree. Vincent Savolainen, Professor of Organismic Biology, a world-renowned evolutionary biologist is chief among them. Per this 2019 article on Phys.org:

There are many theories about why homosexuality is important for reproduction and evolution. Savolainen has outlined some leading models. One is the “bisexual advantage” model where animals with a more fluid sexuality are more likely to reproduce. Savolainen’s lab looks at a range of sexual behaviours from strict heterosexuality to homosexuality. Bisexuality may be “an evolutionary optimum phenotype in many species, including humans.”

When transphobes cite “basic biology” they generally don’t mean biology at all, because if you explain how complex the biology of sexual dimorphism is they tend to switch off. What they actually mean is “the natural order of things” which is nothing more than ideology.