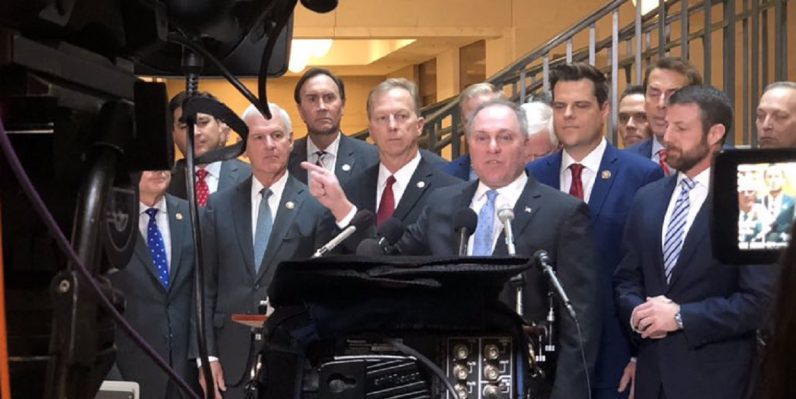 Impeachment proceedings against US President Donald Trump were delayed today when a group of Conservative lawmakers stormed the room in which they’re being held.

BREAKING: I led over 30 of my colleagues into the SCIF where Adam Schiff is holding secret impeachment depositions. Still inside – more details to come. https://t.co/fHhqkZ6x3Z

Their leader, Florida Man Matt Gaetz, claims he organized the stunt in an effort to force the members of the committee investigating a series of whistleblower complaints to open their process up to all members of congress. In essence, Gaetz is demanding the House turn its legal inquiry into the President’s alleged high crimes into a public trial.

The House inquiry involves both Republicans and Democrats and isn’t required or meant to be a public hearing. It’s held in a secure location because key witnesses and pieces of top secret evidence are examined by the formal, appointed committee in order to determine whether the sitting president should be impeached. These are serious proceedings with potentially devastating consequences.

What’s important here is that the proceedings take place in a secure location. Called a Sensitive Compartmented Information Facility (SCIF), these rooms are specially designed for senstive proceedings and have very strict protocols, including a ban on electronic devices.

Storming the SCIF without respecting the security protocols that require people to leave their electronic devices *outside* the space, is actually compromising our national security.

Everything said within the confines of that room is considered extremely sensitive. If any other country – adversary or ally – gained access to the conversations held in that room, it would give them an inconceivable advantage against the US.

When Gaetz and his colleagues decided to breach protocol and introduce electronic devices into this room, the very best case scenario is that it was all in good faith. If we assume every single member of the allegedly 30-deep crew of Republicans who did so are good actors, then the taxpayers merely shoulder the burden of an hours-long delay while security teams sweep the room and debrief the individuals who broke protocol.

But what if one of them isn’t playing straight? Or what if one of them is a patsy who unknowingly trafficked a listening device into the room? What if we don’t know what we don’t know? Because all we do know is that a group of people planned and executed a well-timed scheme to surprise and disrupt what’s arguably the most important Congressional proceedings in decades.

That these politicians aren’t getting an NSA grilling right now is a testament to just how bizarre US politics have become. It’s hard to imagine any other time in our nation’s history that a DoD official’s testimony to a House committee in a secure facility would be interrupted by internal activists without repercussion. It appears even national security must take a backseat to the Trump show.