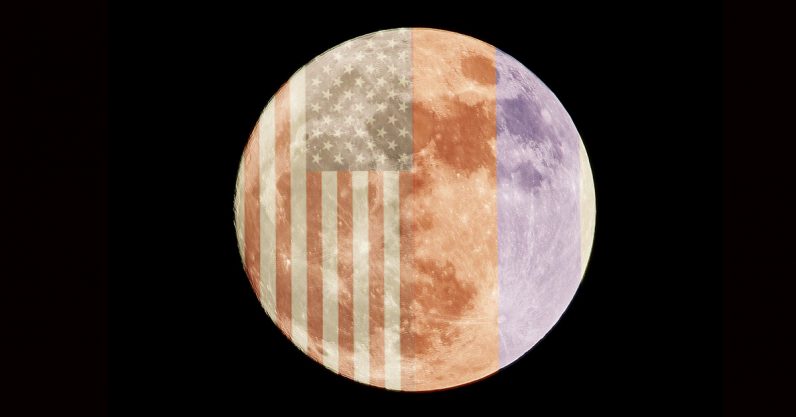 Russia’s federal space agency intends to establish a lunar colony by the year 2040. NASA, meanwhile, announced today that it’d have a continuous human presence there within a decade.

The Moon race is on y’all.

The flag of the United States of America remains the only territorial banner on the Moon’s surface. But a lunar land feud may be looming. It’s become apparent the US and Russia have set their sights on a human-crewed moon landing as soon as possible.

Roscomos, the Russian federal space agency, published a press release on Wednesday stating the moon base was the agency’s top priority (translated from Russian):

The interest of mankind to the moon is associated primarily with the fact that unique regions with favorable conditions for the construction of lunar bases were discovered on the satellite. The implementation of the lunar program will be held in several stages until 2040.

Russia will reportedly implement its new strategy in three phases, to include the launch of an orbital station, a manned mission to the surface, and the eventual construction of a permanent base.

The agency cites a tense geopolitical climate and limited resources as a factor in its timeline.

The US, on the other hand, seems to treat the idea of a lunar colony as a stepping stone to Mars. NASA’s top dog, Administrator Jim Bridenstine, told The Hill:

Right now we’re building a space station, we call it ‘Gateway,’ that’s going to be in orbit around the moon — think of it as a reusable command module where we can have human presence in orbit around the moon. From there we want reusable landers that go back and forth to the surface of the moon. We think we can achieve this in about 10 years, the idea being prove the capability, retire the risk, prove the human physiology and then go on to Mars.

It’s exciting to imagine putting people on the Moon again, but difficult to picture it working out very well. After all, some experts predict there’s a mother lode of resources waiting to be exploited just beneath the Moon’s surface.

And both the Kremlin and the White House would love to secure those treasures for their respective countries. The entire world may soon get to see what nationalism looks like in space– at least, if the current political trends continue for the next decade.

Read next: Apple's Entrepreneur Camp is a show of support for all women in tech