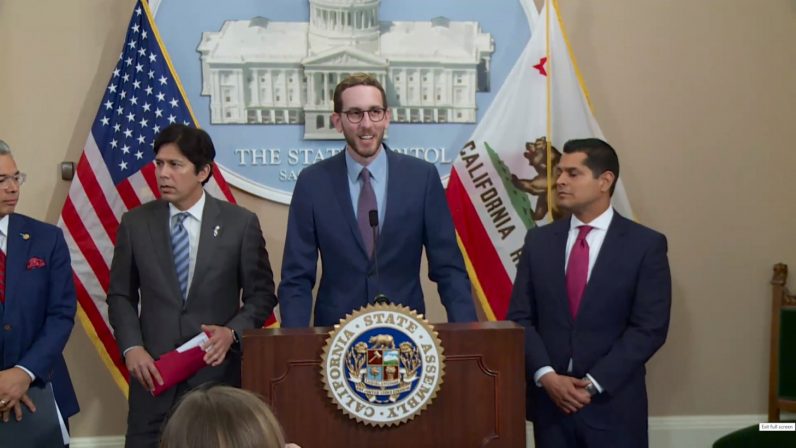 California Democrats today announced a deal to resurrect a Senate bill aiming to give the Golden State the most stringent net neutrality laws in the nation.

The bill, SB 822, was thought dead on arrival just two weeks ago after the head of the Assembly Communications and Conveyance Committee (ACCC), Assemblyman Miguel Santiago, lead efforts to cripple it with telcom-friendly amendments.

Senators Scott Wiener and Kevin de Leon are the original authors of the bill, or rather two separate bills (SB 222 and SB 460) that were combined to become SB 822. In its original form, it was considered by most experts to be the strongest net neutrality protections for consumers in the nation. The ACLU called it the “gold standard.”

The reason I'm covering these state-level bills so closely is because, well, it's California. Its assembly is a liberal bastion. If you can't pass strong net neutrality rules in CA, then where? Pelosi and the Dems know this, too. A weak bill in CA lowers the bar nationwide.

But, treachery seemed afoot when Assemblyman Santiago’s committee decided to gut the bill without affording its authors the opportunity to debate the changes.

Specifically, amendments were added to SB822 that would allow internet service providers to engage in a practice called zero-rating. This allows them to choose whether a service is part of customers’ data cap or not – effectively deciding what parts of the internet people will and won’t have access to based on how much they, or the companies providing the content, are willing to pay. Other unabashedly telcom-friendly changes included allowing ISPs to charge access fees for third party content.

Pundits have suggested that Santiago’s choice to strip the bill of its real effectiveness was motivated by greed – he’s received a substantial amount of money from telcom lobbyists. Alternately, proponents of zero-rating argue it’s good for low-income communities. It’s not.

Outraged with the committee’s decision to modify SB822, Wiener vowed to table the bill if the amendments weren’t stricken. He reiterated this a week later when he requested colleagues pass the bill forward even in its weakened state, simply to give it the opportunity to be strengthened.

Today our #NetNeutrality bill, #SB822, is heard in Assembly Privacy Committee. The bill was gutted last wk & isn’t worth passing in current form. Today we’re asking committee to advance the gutted bill so we can continue to work to reinstate its strong protections. My statement: pic.twitter.com/yraMBXxX6W

Santiago faced immediate backlash as the public accused him of taking money from telcom lobbyists in exchange for weakening California’s net neutrality bill.

In a statement he released on Twitter he said “I have received threats and my wife has been harassed. My personal family pictures have been stolen from my social media platforms and used to create memes. Really? Using pictures of my kids? This is a new low.”

Wiener came to Santiago’s defense, despite being on the opposing side of the issue:

Re #NetNeutrality: People attacking the family of @SantiagoAD53 need to stop. As elected officials, we‘re accountable for our actions & it’s fair to criticize any elected official for what we do. But personal attacks – particularly against families – are off limits. Period.

Today, however, Senators Wiener and de Leon were joined by Assemblyman Santiago to reintroduce the bill with, seemingly, all of the ACCC’s amendments removed. Wiener said the bill moving forward meant California was intent on “restoring what we lost when Donald Trump’s FCC obliterated Net Neutrality.”

It’s unclear exactly what’s changed – the document hasn’t been made available at the time of this writing – but Wiener specifically stated that throttling, blocking, zero rating, and access fees were again prohibited in SB 822 and those protections will remain intact as the bill moves forward.

This begs us to ask why Santiago crippled the bill in the first place. And no explanation was given during today’s press conference — it was politics as usual. The Assemblyman’s original statement merely said he made the changes in preparation for legal challenges from telcom, but those worries weren’t evident today.

He appeared fired up and ready for that fight, saying California’s net neutrality laws would be the nation’s toughest, and offering a piece of advice for republicans:

Now for the red states, I recommend that you follow suit. Otherwise we’re gonna flip some of those states.

Next up for California’s net neutrality fight, according to Santiago, Wiener, and de Leon, is an impending legal battle. Its expected lobbyists for ISPs, including Comcast, Verizon, and AT&T, will sue the state over the bill.

Read next: Apple registers new MacBooks and iPads, but don't get too excited