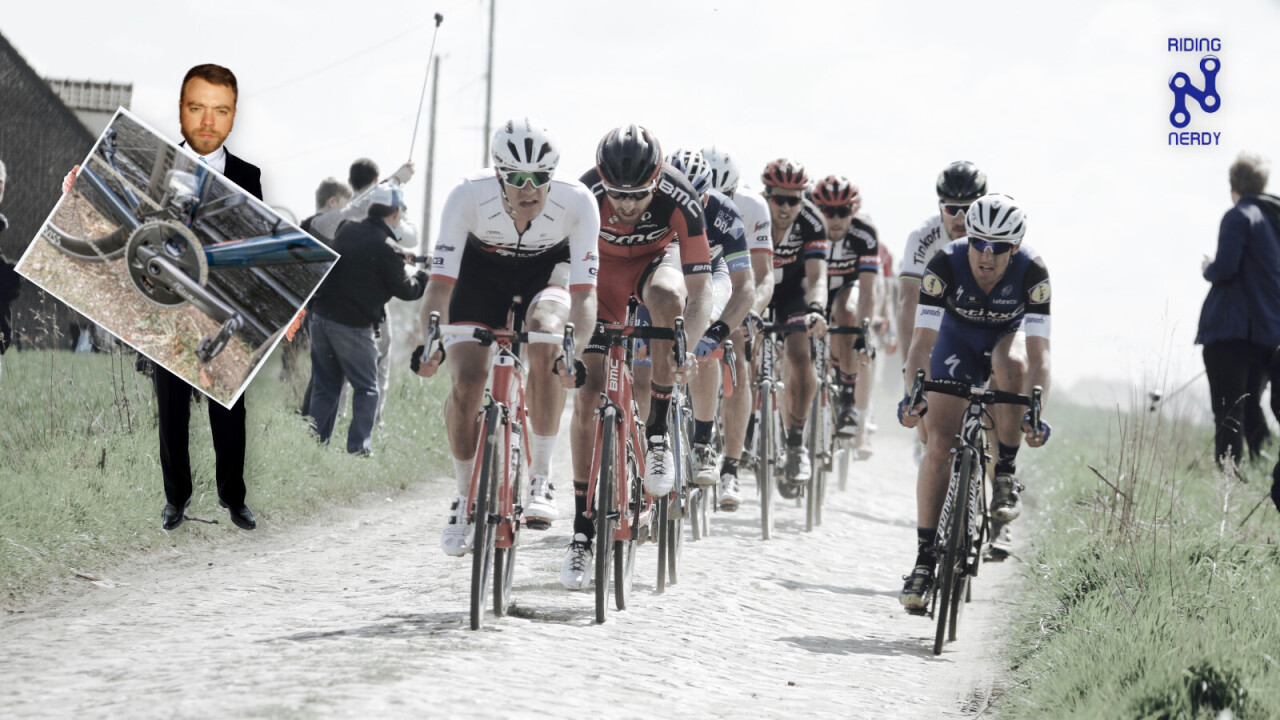 A certain professional cyclist who allegedly won the Tour de France seven times famously said: “It’s not about the bike.” British author and round the world cyclist, Rob Penn, later wrote a book detailing a build of his dream bike entitled: “It’s all about the bike.” And well, they’re both kind of right.

Let me explain, by means of a convoluted review.

[Read: Canyon’s latest race bike is hella expensive — but you get what you pay for]

Recently, I’ve been test riding an undeniably nice, super-high end race bike from German manufacturer Canyon. You can read my initial thoughts of the bike here, but this week, I wanted to focus on just one component of this particular build: The SRAM Force AXS eTap groupset, or the gears, shifters, and brakes to regular folk. These are the bits that makes the bike go and stop. Alongside the frame and wheels, the groupset impacts the overall dynamic performance of how the bike rides.

To the untrained eye, this groupset looks like any other, but there are three key features that make it stand out from the rest.

For one, it’s wireless. All the gear shifting components connect and pair using an encrypted protocol kind of like Bluetooth. For two, it’s a 12-speed system — more on that later. And finally: SRAM has totally rethought gear ratios and thrown the rule book in the trash, and I love that. 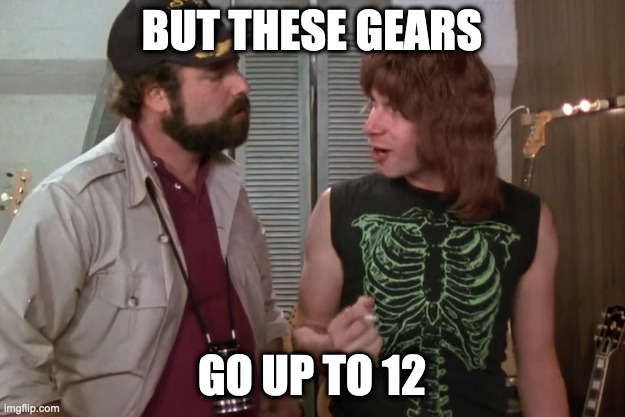 In a functional sense what SRAM has produced, is just plain, simple, and good innovation. Something that’s rather lacking in the bike industry at the moment.

Electronic gears have been around for quite a while now. The world’s leading bike component manufacturer, Shimano, made the first mass-market system commercially available in 2009, and it’s been a mainstay in professional ranks ever since.

The idea goes back even farther, though. French company Mavic, better known for its wheels, developed an electronically actuated, mechanically powered gear shifter back in the 90s. Known a Mavic Zap, it was about 20 years ahead of its time. Sadly, it was plagued with reliability problems, and never progressed beyond a working prototype that was used by just a handful of professional riders.

Fast-forward to last year, SRAM rocked the cycling world with its radically different approach to gearing, when it launched the first version of its top-level, 12-speed AXS eTap groupset. Shortly after, the slightly more affordable second-tier Force version followed. Bringing us to today, where I ride a bike with no gear cables, and more customization than will ever be possible with mechanical gears.

Here’s the thing. Wireless electronic shifting is great, but it’s not as transformative to the experience of cycling as I thought, or hoped, it would be.

Obviously it makes shifting gears easier, but this was never particularly hard anyway.

On SRAM eTap systems, there are two buttons. Pressing the right shifts down. Pressing the left shifts up. Pressing them both at the same time shifts the front mechanism to move the chain from small to large cog, and vice versa.

I’d even go so far as to say there’s no discernible difference in shift quality when compared to a well-setup, well-maintained, good-quality mechanical system. Mechanical drivetrains are just that good nowadays.

Electronic gear mechs are also, generally speaking, heavier than equivalent mechanical systems. But, unless you absolutely must shave as many milliseconds as possible off your ride, this doesn’t matter at all. </p>

In my opinion, electronic shifting does not improve shift performance in a way that really matters, rather it augments the experience of shifting gears and this is what matters. It changes how shifts feel rather than changing how shifting actually functions. It’s about the bike, but at the same time, it isn’t.

One small shift for bike, one giant shift for mankind

The main benefits of wireless electronic shifting are aesthetic, customization, and low maintenance. As I mentioned in my initial impressions of the Canyon Ultimate CF SLX, the lack of gear cables and wires gives the bike a spotless and tidy look.

Installing the system is probably the easiest building a bike is ever going to get. With no wires, there’s no fiddly work to thread cables through the frame to connect control units and batteries. Setup is all done with button presses, rather than carefully balanced cable tension and well-tuned limit screws. There is a bit of ”techy” stuff to do, but that’s no more difficult than pairing a set of Bluetooth headphones to your phone.

Using the accompanying SRAM AXS app, riders can customize how the bike shifts too. You can reprogram what the buttons do and how the system shifts. There are two “enhanced” modes for shifting: Compensating and sequential.

The compensating mode will shift up or down at the back when you shift at the front to compensate for the big jump between cogs. This smooths out the transition between gears.

<spa< span=””>n>The sequential shifting though, is the real secret sauce. It does away with the notion of having to shift the front mechanism at all. Using the buttons, you tell the system whether you want an easier or harder gear. The system takes care of the rest.</spa<>

In my relatively brief experience of the groupset, the best bit has nothing to do with electronics or wireless shifting. It has everything to do with SRAM’s approach to gear ratio and choice of cog sizes. Strap in folks, cause things are about to get nerdy, like really bloody nerdy.

All the gear, one big idea

For years, groupset manufacturers have been adding extra cogs to the rear cassette in a vain attempt to one-up each other. Good quality groupsets now have anywhere between 11 and 13 cogs at the rear. When I first started cycling, your bike was good if it had seven cogs at the back.n>

Alongside additional cogs, we’ve also seen the ratios of cassettes get wider. Bikes equipped with 11-32 cassettes are very common. In extreme cases, 11-34 cassettes aren’t unheard of either. Bicycle gear cogs are named after the number of teeth they have, more teeth means a bigger cog. In cassettes, a bigger difference between the two numbers represents a wider spread of gears.n>

As a result, the jumps between individual gears have gotten larger. Sure, the incessant cog adding has mitigated this somewhat. But I can attest from riding a standard 11-28 in Holland, the flattest place on Earth (probably), that most of the cogs don’t ever get used.

Wide range cassettes are great in most parts of the world. But I often wonder if there’s a better solution.

SRAM Force AXS rethinks bike drivetrains by making everything smaller, and that’s a good thing. By making the front cogs smaller and also dropping the overall size of the rear cassette, SRAM has managed to increase the overall range of gears, and also decrease the jumps between them.

Most hardcore roadies will bemoan the drop in size because it looks less “pro” and they mistakenly think smaller means slower. Only, the top gear combination of 48/10 will let you go faster than a 52/11, so they’re just wrong.

Also, because the bottom gear is a 35/28, it will let you keep your legs spinning up tough climbs, more than the conventional ratio. What’s more, because the jump from 35 to 48 is only 13 teeth, not the 16 of the 52/36, front shifts are smooth, quicker, and don’t cause your cadence (the speed of your legs) to drop quite as much.

The key difference between a regular cassette and the SRAM one I’ve been using is the number of one-tooth jumps between gears. On the 12 speed ion”>SRAM block, there are seven, one-tooth jumps, comparable conventional cassettes have just four. In otheran> words, the SRAM gears progress more smoothly and allow you to maintain a more consistent cadence.

However, with the SRAM Force AXS, the combination of not sacrificing overall range, but keeping a really tight set of ratios makes for a really usable groupset that always has the right gear on hand. I’ve found over longer rides that this really helps fight the onset of fatigue because you can always keep your legs spinning at a comfortable rate, you’ll never spin out and you’ll never be caught grinding up a hill (or into a head wind).

It should be noted that developing these gear ratios didn’t actually require much technological innovation per se. Rather, it required someone to sit down at a desk, study a gear ratio chart (like this one) to figure out how best to use 12 cogs on a cassette and two cogs on a chainset.

It took careful thought, and a leap of faith that people would get on board with something that totally shuns tradition.

On one hand, I could take or leave the electronic shifting side of things. For me, an average rider, the marginal performance gains don’t justify the price. The current going rate for the SRAM Force AXS groupset (not including chain, cassette, and chainset) is about $1,400. All in, you’re going to be up near $2,000.

For some perspective, the system I recommend to most riders is the 105 groupset from Japanese manufacturer and market leader Shimano. A span>full disc brake 105 groupset (including chainset, chain, and cassette) costs about $630 at current going rates.

I would love to see SRAM release a cost-effective mechanical version of this groupset to compete at the same level as the 105. If it did, I would seriously consider buying it. I currently ride a SRAM 10-speed system on my own bike, for what it’s worth, and I love it.

Using the SRAM Force AXS eTap has in many ways allowed me to connect with the simple joy of cycling a little more than usual. Products that enable that are hard to find. What makes this groupset good has little to do with what the groupset actually is, and everything to do with how it enhances the cle”>otation”>experience of riding a bike all day.

<span>As those two characters at the start of this review might say: It’s got everything and nothing to do with the tech. </spa