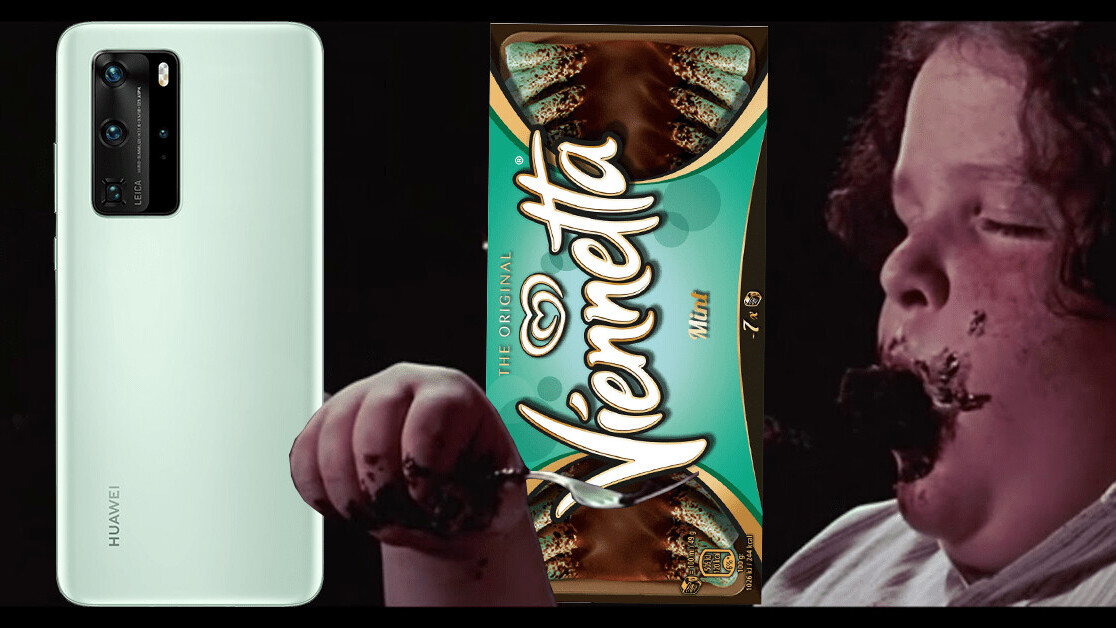 If you’re reading this from anywhere but Britain, Ireland, and other equally cultured places, you might not know what a Viennetta is.

And for that, I both envy and pity you.

Simply, it’s somewhere between a cake and an ice cream. They’re constructed using what I can only assume is high-level engineering and some form of dark magic fuckery. The ice cream is warped into these curved, flowing layers that — to the cultured amongst us — delivers an emotion reminiscent of Hokusai’s masterpiece, ‘The Great Wave off Kanagawa.’ Somehow, this is then sandwiched between atomic-level thin layers of chocolate, and topped off with a layer of deliciousness. And a chocolate powder of some kind.

And the new Huawei P40 Pro color leak makes me want to eat one so fucking bad.

Don’t believe me? First off, how dare you. Secondly, here’s a photo of a mint Viennetta:

And here is a photo of the new mint green Huawei P40 Pro color (props to Evan Blass for finding it):

It’s not a surprise that the Huawei P40 Pro color scheme is moving in this direction. I mean, Apple’s iPhone 11 range shifted into more pastel-y tones too, so there’s obviously a trend shift towards this palette. And we all know how much companies love copying Apple.

There’s one important difference though: none of Apple’s devices (even the green one) made me want to take my shirt off, sit down on some plastic sheeting, and slam a whole mint Viennetta into my mouth like the Huawei P40 Pro does.

I don’t know why — I’m not a psychiatrist after all — but that’s just the way it is.

A lot of information about Huawei‘s new flagship has leaked in the past couple of weeks. We wrote a piece covering some of the main bits of information, which included facts like:

To conclude: Do I believe leaks like these are driven by the companies in question to try and whip up press interest in their devices, and provide some marketing in the run-up to a launch?

Of course I fucking do.

And I am now part of that horrible cycle? Yes. But do I care when this Huawei P40 Pro color leak has led to me daydreaming about covering my naked, hairy body in a glorious mint Viennetta? Actually, yeah. A bit. Because I don’t live in Britain or Ireland these days and — even if I did — I’m a vegan, so can’t eat the fucking thing anyway.