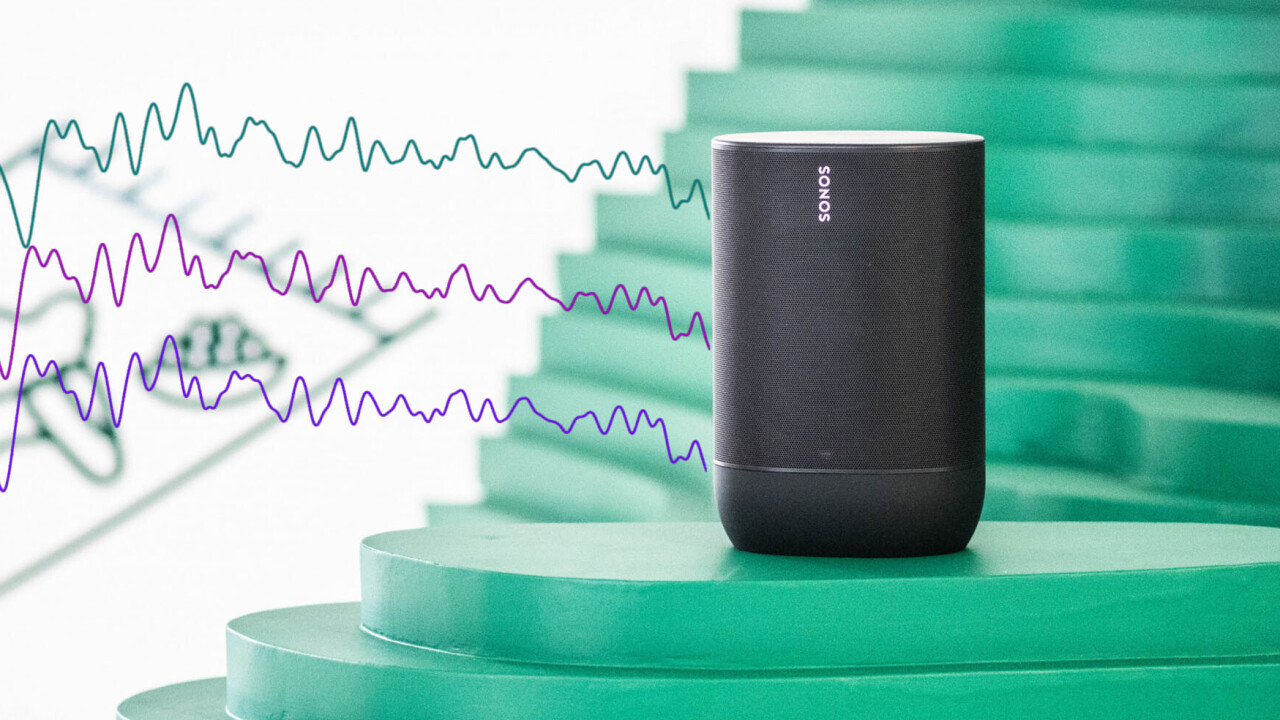 Audiophiles are often dismissive of mainstream brands and technologies. Take Sonos, the biggest name in wireless audio. While many acknowledge their speakers sound good, it’s usually accompanied by a qualifier like “for a wireless speaker,” or “when I’m listening to music in the background.”

It’s been my experience that wireless speakers are often competitive with some more expensive traditional hi-fi speakers, despite their convenience – so now I want to put that to the test. Today’s subject is the $399 Sonos Move, the company’s first portable, IP56-rated, Bluetooth-enabled speaker. My colleague Callum Booth previously offered his thoughts on the speaker here – it’s worth reading his review for a broader perspective. I’m just here to talk about the data.

[Read: Devialet’s Phantom Reactor is the David to your subwoofer’s Goliath]

Over the past year, I’ve taken a more technical approach to my audio reviews, capturing their performance through frequency response measurements that studies show can be correlated highly with user preference. I still actually, you know, listen to the speakers before taking the measurements, but capturing the data gives allows me to provide a more objective perspective that’s less colored by thoughts like “this is a Bluetooth speaker, it’s not supposed to sound great.”

Because, as far as I’m concerned, it does sound great. My impression was the Sonos Move sounded surprisingly balanced in my home, even before using the speaker‘s “Auto TruePlay” feature that can adjust the speaker‘s sound automatically depending on where it’s placed. Let’s see how it achieves this.

The Sonos Move is a difficult speaker to measure because its drivers are in an unusual configuration. It has a fairly typical 3.5-inch woofer, but its tweeter actually fires downward into a “waveguide” that then spreads the sound around a small slit that wraps around the majority of its circumference.

This has two theoretical benefits. One: it helps make sure the speaker sound good no matter where you’re standing. It outputs nearly the same sound 90 degrees to its side as it does right in front. Two: since the Sonos Move is designed to be super-durable, the thin, sloping waveguide protects the tweeter by minimizing the chances that something will make contact with the sensitive component.

In order to capture the speaker‘s performance, I use a quasi-anechoic measurement technique that essentially filters out wall reflections from the data. I then repeat these measurements at several angles to show how the sound radiates around the speaker, because what we hear is not just the first sound that reaches our ears, but a combination of the direct sound with very first reflections from our walls.

Lastly, it’s important to note that studies by researchers such as Floyd Toole and Sean Olive have shown us that, contrary to popular belief, most people like roughly the same balance of frequencies in their speakers. The vast majority of people prefer a sound that is “flat.” In a typical room, what’s perceived as flat is actually a slight downwards tilt from the bottom of the frequency range to the top because of reinforcement of the bass and absorption of high frequencies.

Let’s see how the Sonos Move does. First, we have the direct sound – the sound when the speaker is aimed directly at you. Note that I’m not yet including the bass performance in this data.

Eesh. It seems we’re not off to a good start, but bear with me. Normally, we’d want the sound to be flat all the way through for this measurement. We see big dips and peaks in the treble here, likely caused by the reflections within the waveguide.

We see a slightly cleaner performance if we capture a “listening window” average, which accounts for the fact that most people aren’t perfectly centered or still when listening to speakers. This is an average of measurements within a 30-degree horizontal and 10-degree vertical window. I’ve also added in the bass performance to this graph, which was captured using a separate nearfield measurement technique. You can see the bass extends cleanly down to 40Hz – an impressive result. The highs still aren’t looking great though:

But remember what I said about hearing a combination of the direct and reflected sound? Because the Move isn’t a speaker most people will sit directly in front of and listen to like a hi-fi speaker, it seems the company prioritized a balanced, almost omnidirectional radiation instead of the direct sound. In this image we see the two graphs above, as well as how the Sonos Move measures out to 90 degrees:

Though the treble still looks messy, note how it remains a similar distribution even all the way out to 90 degrees.

To make some sense of the messiness in the highs, we take an average of several measurements in the vertical and horizontal planes, producing something called an “Early Reflections” curve, shown in blue. This average essentially summarizes the most important sound to reach our ears and more closely represents how we’d perceive sound in a typical listening environment.

You can see the response tilts down fairly smoothly from the bass to the treble, which means that the speaker should essentially be perceived as fairly close to “neutral” so long as you’re not listening from very close. We’re not too sensitive to narrow peaks and dips, and this is a better result than some proper hi-fi speakers. I suspect the curve would be even smoother if I’d taken measurements in tighter intervals. The data above also tells us that in a stereo setup, this speaker’s wide dispersion leads to a massive soundstage; something I thought in my own stereo listening.

Lastly, like most smart speakers, the Move uses digital signal processing to enhance bass performance. The trade-off is that Sonos places a volume limit on the bass to protect the drivers from going kerplunk. In this next suite of measurements, the data is no longer quasi-anechoic, so it includes room reflections and the full bass extension, and therefore looks wavier in its lower half. We can see how the bass performance changes from 50 percent volume to 100 percent.

The Sonos Move puts out a remarkable amount of bass for a small speaker up to about 85 dB- which is louder than comfortable for most people in the first place. It extends down to about 40Hz, which is more than most proper bookshelf speakers. It might not put out the loudest bass outdoors, where there are fewer reflections to reinforce the sound, but 85 dB should be more than loud enough for most indoor scenarios. Once you pass that level, the bass is limited to 100Hz, which isn’t too bad.

Crucially, the above graph also shows that in a typical room, the squiggles in the earlier quasi-anechoic data are of little relevance – the speaker essentially has an impressively well-balanced distribution of frequencies(with the expected downward tilt) once you factor in the reflections of a typical room. (Note the notch around 50-80Hz is an artifact of my room, not the speakers).

The Sonos Move may not be the pinnacle of hi-fi, but it’s a speaker that seems to carefully balance overall sound quality with its intended use as a Bluetooth speaker and its promise of serious durability. It may “just” be a Bluetooth speaker, but it’s clear some real consideration went into its acoustic performance – as one would hope for $399. Sonos may make products for everyday consumers, if the Move is anything to go by, its audio chops are no joke either.

This post contains affiliate links to products you can buy online. If you purchase a product using one, TNW gets a small cut of the revenue.