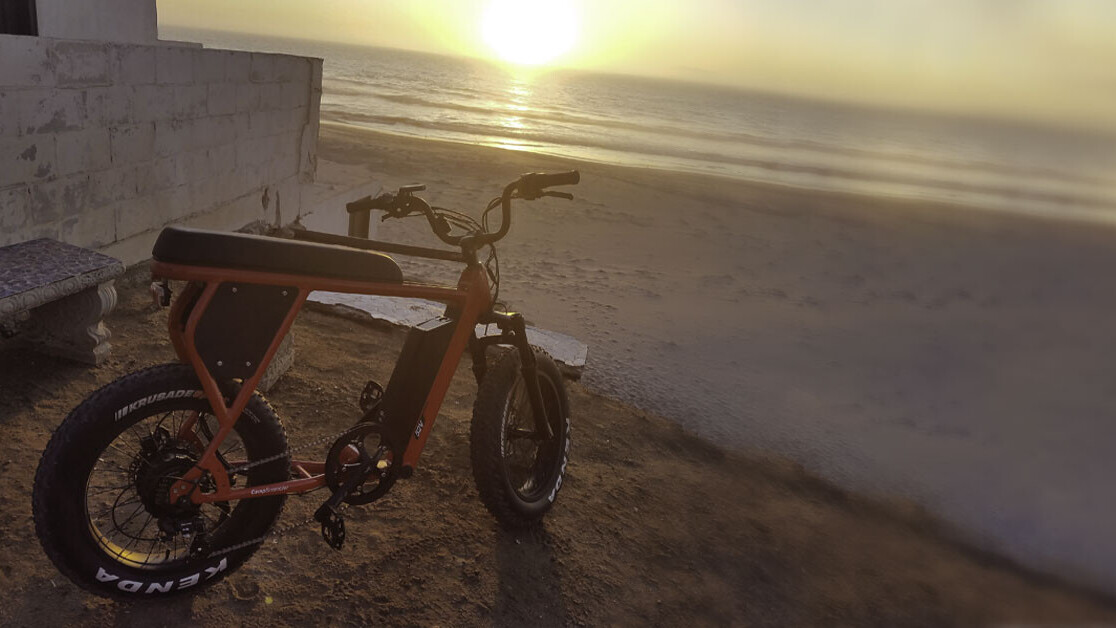 Juiced Bikes‘ Camp Scrambler changed my life. It’s an excellent e-bike that combines a head-turning aesthetic with thoughtful design and top-notch technology. But it’s so much more to me: it gave me back my freedom.

I’ve always loved all things that go. I wanted to grow up to be a fighter pilot. My first car was a Mustang. I spent my military career riding in speed boats and helicopters. Much like my fictional shipmate, Lt. Maverick from the movie Top Gun, I feel the need for speed.

Unfortunately, around the time I turned 30, I was diagnosed with an auto-immune disorder and made the decision to surrender my driver’s license. In the years since I’ve relied on public transportation, friends, and eventually Uber and Lyft. I don’t miss being stuck in traffic, or dealing with terrible drivers. But I do miss the control. I can understand why so many people don’t want to see traditional automobiles replaced by autonomous cars.

Riding a bicycle is difficult for me. Some days I’ve got the stamina to go bouncing through mud-puddles or gear through some hill-climbing. Other days, pedaling to the end of the block wears me out. Basically, my unique situation calls for something that isn’t going to go too fast – motorcycles and 40+MPH scooters are out of the question – but can still power me around if I’m too fatigued to pedal or walk a 75-pound hunk of metal up a hill.

Theoretically, any e-bike could suit my needs. But the Camp Scrambler has a hat-full of features that feel like they were designed with someone like me in mind. Before we get too deep into the experience, let’s talk about specifications and what, exactly, this bike is.

The Camp Scrambler functions just like any other bicycle you’ve ridden. You pedal, it goes. It has seven-speed Shimano freewheel gears, you shift it by twisting the shifter while you’re pedaling. I tested it with the power off to get a feel for what kind of “bicycle” the Camp Scrambler is, and I was more than pleased. Even with my aforementioned condition, the gearing made it easy for me to maintain a comfortable, speedy ride. Shifting is simple and intuitive, there’s no learning curve here even if you’ve never ridden a seven-speed before.

Everything about the Camp Scrambler is thoughtful. Juiced Bikes didn’t just pour some money into marketing and R&D to come up with a product that “users” would purchase. From the Kenda Krusade tires to the removable 54V battery that charges in a mere four hours, Juiced Bikes didn’t cut a single corner in the development of this bike. 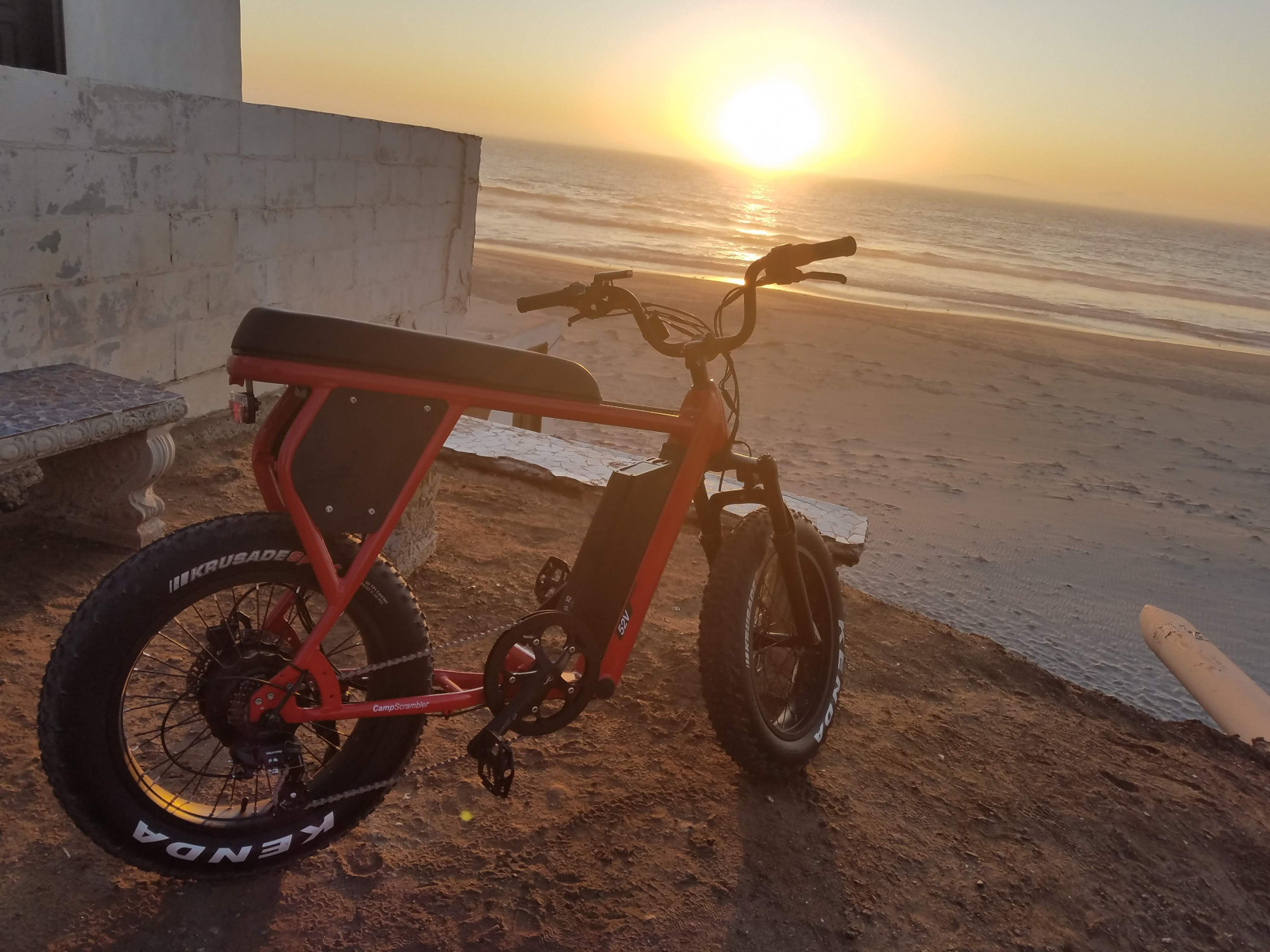 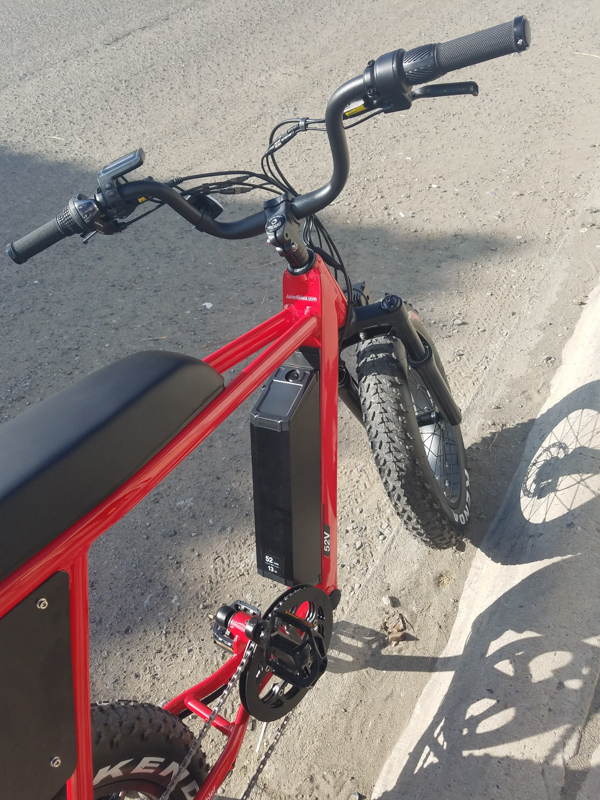 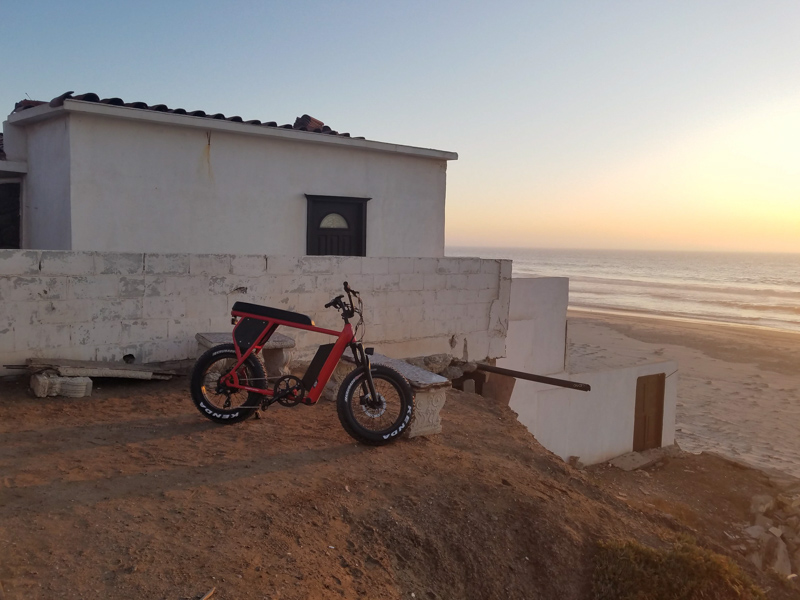 Let’s talk about the looks for a moment. I’ve fallen head-over-heels in love with this thing and I’m not afraid to admit that the retro, old-school, California vibe of the Camp Scrambler has me biased towards it over other, similarly-priced e-bikes. The difference here is, as I mentioned before, this design works for me in ways others can’t. The banana-style seat is plush, comfy, and thick enough to absorb big bumps, but more importantly the bike‘s posture keeps me sitting upright with all my weight on my butt and legs. This is huge.

Most bicycles and e-bikes that I’ve tried out force me to lean forward a bit and put my weight on my hands on the handlebars. This fatigues me fast. I can’t ever rest when I’m holding myself up with my upper-body, and that means I can’t ride the bike for long even if I’m letting the motor do all the work.

I can sit on the Camp Scrambler for hours without fatiguing, this is huge for me and due 100 percent to the bike‘s seat, posture, and frame design. If you prefer to sit upright and relaxed – like on a cruiser or Harley-style motorcycle – then this bike is for you. If you prefer the Kawasaki Ninja-style or mountain biking posture that has you leaning into the handlebars, it’s probably not going to be your favorite ride.

That’s not to say this thing isn’t spry. You may not lean into it like a speed bike, but it has some serious pep. The Camp Scrambler has a rear-mounted 750w Bafang motor that powers the bike up to 20MPH with the included throttle, up to 28MPH through pedal-assistance using a cadence feature.

This means you can zoom around without pedaling by twisting the throttle located on the right grip on the handlebars, or you can opt to have it augment your pedaling power. The cadence-sensing is really cool. Basically, if you’re pedaling on flat ground it’ll try to match your pace to maintain speed up to 28MPH. Once you get to a hill, it’ll help you pedal so that it feels as easy to pedal up the hill as it does to pedal on flat ground. It’s something you have to experience for yourself to truly get, but it’s incredibly empowering to feel like a bicycling-deity who can’t be slowed by hills!

The motor, and the Matrix LCD display control that you use to operate it, are phenomenal. The motor has five settings: an economy mode that offers the minimal amount of assistance in order to preserve as much battery power as possible, three individual settings beyond that (labeled 1, 2, and 3) which allow you to fine-tune your cruising experience, and both a ‘speed’ and ‘race’ mode that allow you to max out your power in both throttle and pedal-assistance mode.

As I write this review now, having put in more than 100 miles on the Camp Scrambler, I’m comfortable and confident zipping around on the highest settings. But when I first started using the bike they felt very fast and the acceleration was daunting. It goes faster than you think a bicycle should, especially taking off from a dead stop.

At first, I ended up doing that one-foot-hopping-on-the-pavement while the other pushes the pedal kind of wobbly, almost about to fall over, take-off every time I launched from a standstill and forgot the pedal-assistance was on. But, once I got used to it, I was able to leap on the back and hit the throttle in one-smooth motion to get going before my feet ever touched the pedals. Say what you will about men in their 40s riding e-bikes, but it feels like I look cool as hell.

It’s also worth mentioning that this is a fat tire scrambler. That means it’s perfectly suited for dirt roads and bumpy terrain. In fact, it also has adjustable suspension. If you live somewhere with paved roads and relatively little rough terrain, you can set the suspension lean so that you don’t “whale around” in the air. But, if you’re like me, and you live on a beach in Mexico where the roads go from paved to cobblestone to gravel within a matter of blocks, you’re going to want to loosen that suspension up so you don’t feel every rock in the road in your spine. Thankfully, with this bike, you can.

I’ve been getting about 25-45 miles between charges. That may seem like a pretty big difference, but the fact that it has both a throttle and pedal-assistance means that you’ll use less juice when you’re pedaling and more when you’re throttling. Obviously whether you’re biking uphill for 10 miles or just cruising on sidewalks will also play a major role. The bottom line is, just like a car, how you use it will determine your mileage. But, one cool caveat here: if you run out of power, you’ve still got a perfectly good seven-speed bicycle to ride home. Something you can’t do with a car or motorcycle.

Charging the Camp Scrambler is a breeze. I’m so, so very thankful they went with a design that includes a removable battery. The battery locks in place and you need a key to remove it, so you don’t have to worry about someone jacking it to screw you over. But the ability to leave the bicycle in the garage while I charge the battery inside is huge.

Oh, and speaking of security, the Camp Scrambler also has a quick-release front tire, so you can take it with you when you go into stores as an extra protection against theft. This is common in e-bikes, but considering the Camp Scrambler’s laid-back aesthetic it’s worth mentioning here.

Another impressive feature of this e-bike is the 180 mm hydraulic disk brakes. This thing has serious stopping power and, as an added safety feature, the bike automatically cuts power to the motor while you’re braking. This came in handy early on in my testing when I still wasn’t used to the motor’s pep and I’d find myself throttling and braking at the same time.

Honestly, the only thing I didn’t like about the Camp Scrambler was also the thing I liked about it the most: its looks. I freaking love the red frame with black accessories. It also comes in black and silver, but the red looks faster. The problem is that it looks too good. I literally cannot go anywhere with it without someone trying to flag me down to talk about it.

I can’t say for sure that this is a problem everyone will have, but consider that I live in Baja California where dune buggys, motor-bikes, and off road vehicles that probably wouldn’t be street legal in the US are common. The fact that the Camp Scrambler still turns heads here says something about it.

If you’re the chatty type, this could be a good thing. You’ll certainly meet new people riding this e-bike if your experience is anything like mine. I suffer from social anxiety, so I just smile and indulge people before zooming off down another dirt road.

I adore this bike. I love its power, aesthetic, and the thoughtful design that went into it. I can see the Camp Scrambler being used on military bases and campuses where zipping around on streets, sidewalks, and across fields or through small wooded-areas and beaches could be necessary. Basically, if a golf cart won’t make it and you can’t drive a car there, this bike can probably handle it.

I rode the Camp Scrambler on the beach, in the rain, through puddles, and at night. The included headlamp and battery-powered tail light are welcome safety features, and the hydraulic disk brakes made me a little less skittish about riding in traffic during wet conditions. During my testing I also rode at speeds above the 20 and 28 MPH thresholds for the motor and didn’t experience any wobbling or loss of control.

The bottom line is that the Camp Scrambler is everything I hoped it’d be. I can ride to the store a mile away or go for a 20 mile cruise along the coastline and I don’t have to worry about having a friend on standby in case I get too fatigued to pedal and need a ride.

The Camp Scrambler by Juiced Bikes is my favorite product of 2019 (tied with Neumann’s awesome NDH-20 studio headphones). It’s not just a well-designed piece of gear, it’s a product that’s given me my life back. I’m free again.