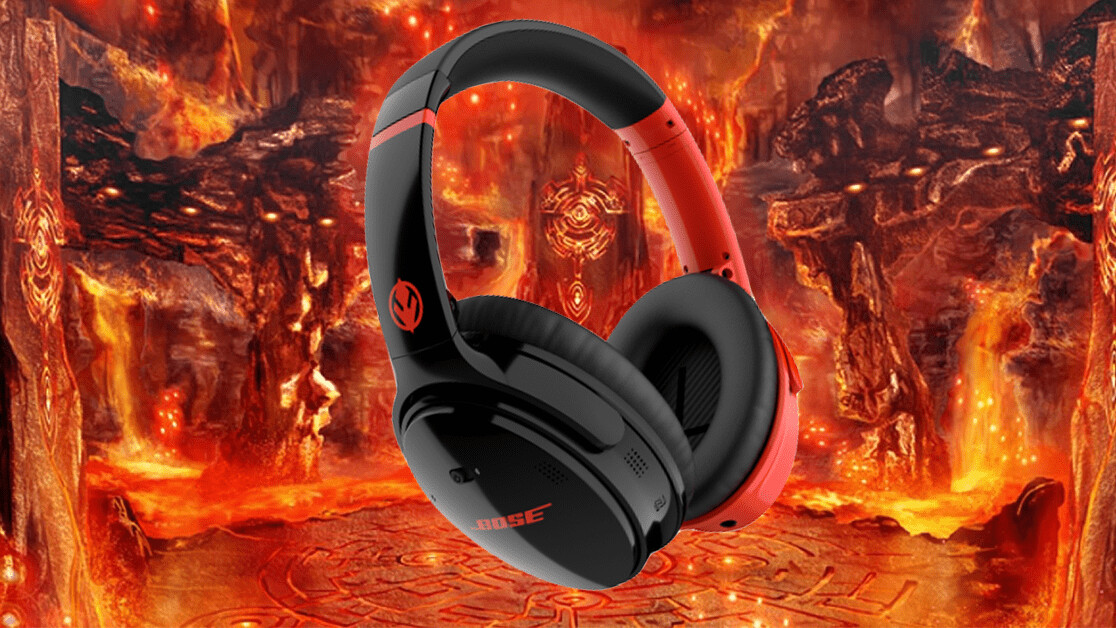 I like Star Wars, I really do. Hell, the movies are so embedded in my life I can’t even remember when I first saw them. I pumped a huge amount of money into the franchise, playing the games, reading the books, and buying the shit — I’m genuinely immersed in the world.

But, today, it got too much.

Yep, you guessed it, Bose launched a Star Wars edition of its famous QuietComfort 35 wireless headphones II. Yep, things have gotten so bad on this godforsaken planet that you, an adult person, can now buy a Star Wars branded pair of premium headphones to celebrate the third film in the series’ third trilogy (which, to be honest, does sound like the kinda thing that’s a harbinger of the apocalypse).

It’s not that the things look bad, I mean, they’re actually kinda fetching in a “I-wear-short-sleeved-shirts-with-flame-decals” kinda way:

It’s just… why? Now, I’m not asking form a commercial stand-point. If the public are buying these things, then why not sell them? No, I’m asking you, the people, why on earth would you purchase a pair of these?

Yeah, I can understand why you’d buy Star Wars merchandise in general. A T-shirt? Cool. A mug? Tasty. A LEGO figurine? Sure. But a $400 pair of top range headphones? That cost over $120 more than the normal pair? That you’ll probably wear everyday for the next three years? Dude, come on.

I think it’s because there’s no real point to these things. Novelty items like the above are cool, but why would you ever need franchise-branded versions of expensive products? (Shout out to the Star Wars Le Creuset cookware). Yeah, Bose‘s Star Wars headphones have been released alongside an app that offers you an “audio AR experience,” but this doesn’t give the branded headphones any more legitimacy for two main reasons:

In other words, losers, if you want a premium pair of headphones, just buy the normal ones. Bose‘s Star Wars headphones have no reason to exist.

Really though, I shouldn’t be surprised. Since Disney bought the Star Wars franchise, the amount of product tie-ins have gone through the roof.

The company has managed to avoid a massive backlash from this though because it’s pulled this wonderful PR trick where a lot of the public see it as a friendly provider of joyous entertainment, despite it being, in reality, a profit-driven, global powerhouse that — if certain laws were relaxed — would steal your children and force them to work in mines, before turning their exhausted bodies into a goo to feed the wealthy.

I think what’s really galling is how many places play along with this game. It seems like there’s a formula where you add a logo of a big show or movie to an unrelated product, crap tons of news sites cover it, the public buy it, and we end up with “PROFIT.” You know, like the inevitable conclusion of Bose‘s Star Wars headphones saga.

And I just don’t get it.

Oh, actually. Hold on a second — what am I talking about? I totally do get it. It’s all about affiliate links and getting a slice of that sales revenue.

Woah, woah, stop. You read everything above? Well, if you’d be so kind to forget about it? Perfect, thanks. Let’s start again:

HEY GUYS!!! YOU’LL NEVER BELIEVE IT!!! BOSE HAS RELEASED A PAIR OF STAR WARS HEADPHONES!!1!1! OMFG THESE ARE SO ZANY AND EXCITING AND COOL!!!

DID YOU KNOW YOU CAN BUY THEM FOR ONLY $400?!?! YOU’D BE STUPID NOT TO BUY THEM RIGHT NOW. BUY THEM!! FILL THE ACHING VOID IN YOUR SOUL AND BUY BOSE’S STAR WARS HEADPHONES, BUY THEM TO RECLAIM A SLICE OF YOUR LOST CHILDHOOD, BUY THEM OTHERWISE I WON’T HAVE A JOB MUCH LONGER.