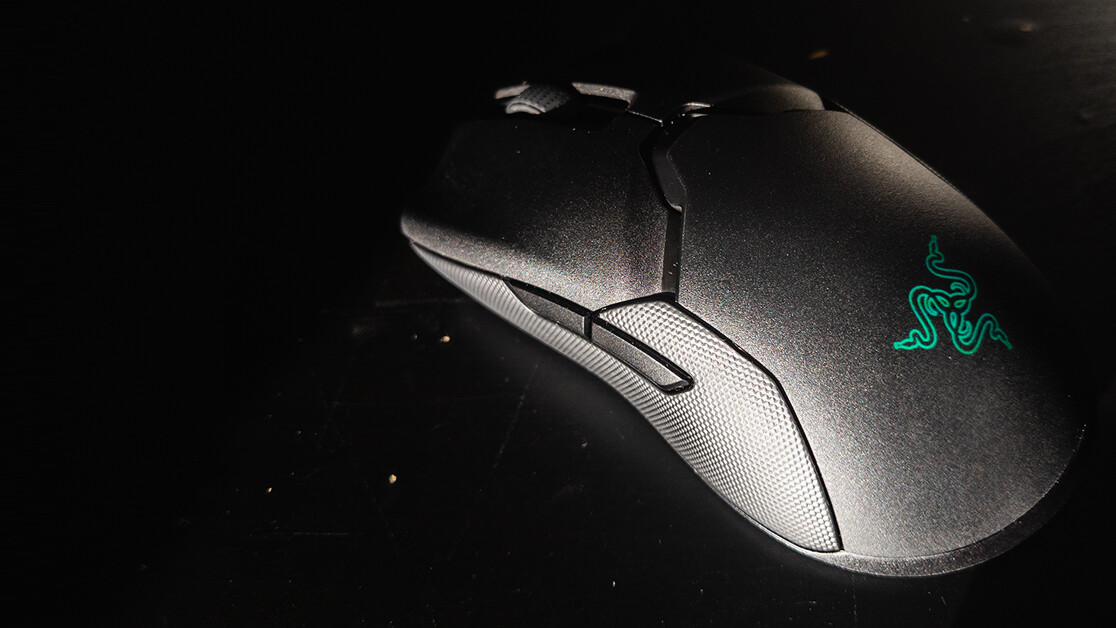 It’s been a few weeks since Razer announced the Viper Ultimate — a wireless gaming mouse which the company claims delivers 99.6-percent resolution accuracy.

The Viper Ultimate builds on Razer’s Viper lineup, which emphasizes performance, precision, and speed in a light form factor. Now it offers this whole package in a fully wireless experience.

But does it deliver on its promises? After toying around with this beauty for a few weeks, I can confidently say the answer is “yes, it does.” But allow me to elaborate.

What does it get right?

Let’s start with the obvious: at 74g (without the cable), this thing is light as hell.

The design, while functional, is simple and clean. There’s not much to it, but it gets the essentials right. It’s all black, with the exception of the Razer logo-shaped RGB light in the area where your palm rests. If you turn the RGB lights off, though, the logo is almost invisible.

You can guess the rest: two buttons, one left, one right, and a scroll wheel. The scroll wheel sports a ratcheting mechanism, which emphasizes precision.

There are also four side buttons — two on each side — which are all programmable (you’ll need Razer Synapse for that, though).

At the bottom of the mouse you’ll find the on/off switch, as well as a dedicated DPI button to fine-tune the sensitivity on the fly. There’s also a tiny, hidden compartment for the wireless USB dongle. Pretty neat, if you tend to carry your mouse when traveling or gaming at computer clubs (and LAN tournaments).

I used the Viper Ultimate exclusively with the dongle, and I never experienced any connectivity issues at all. Not even a single one.

The mouse can last up to 70 hours on a full charge with the RGB lights turned off, but you can expect anything between 50 and 60 hours if you keep them on. To charge it, you can either use a dock (which costs extra) or plug a micro USB cable directly into the mouse.

The mouse also supports a polling rate of up to 1,000Hz. That’s the setting out of the box, but if you can tweak it with Synapse if you so wish — but I don’t see why you would.

When I first got the Viper Ultimate, I was already testing Logitech’s MX Master 3. Those are two very different devices, aimed at different audiences, so performance and functionality comparisons won’t really tell you much about either. That said, I found it difficult to go back to gaming with the MX Master 3 after using the Viper Ultimate.

The precision, the responsiveness, the levity of movement. These are factors that make a huge difference when your only objective is to mercilessly frag down your enemies.

Honestly, there’s hardly anything I can complain about with the Viper Ultimate.

The scroll wheel makes a hard clicky sound when turning, which some people might find irritating, but I personally like the noise. It gives me the impression of sturdiness.

Perhaps, the biggest shortcoming is the lack of a USB-C port directly on the mouse for fast charging, but I’ll give Razer a pass this time.

I steered clear from Razer Synapse — the software to control the RGB lighting on its products and customize buttons —  as much as I could, simply because I absolutely despised using it when testing the Razer Blade. I guess it serves a purpose, but to me it feels like bloatware. Especially when the mouse works fine without it.

This is more of a personal whim, but it would’ve been cool if Razer included some sort of a battery indicator directly on the mouse. The scroll wheel blinks red when the Viper Ultimate has got only 5 percent (or less) battery left, but I would’ve liked something more informative. Of course, the goal is to make the device as light and efficient as possible, so I get it why it didn’t.

The omission of a battery indicator in Synapse, however, is unforgivable (but can hopefully be fixed with a software update).

Is the Razer Viper Ultimate worth it?

As you might’ve guessed by my pet peeves with the Viper Ultimate, I absolutely loved it — and would recommend it to anyone seeking a premium gaming experience, with no strings attached (pun intended).

If the price seems somewhat steep, Razer says the mouse will be available sans the dock for $129.99 starting from February next year. That way, you could save a little cash and charge it directly from the cable. The only advantage of using the dock is that it has an RGB battery indicator, but that’s about it. As long as you make sure you charge the device every once in a while, you won’t have to worry about an indicator anyhow.

But if you don’t feel like waiting around, you can grab the Viper Ultimate and a dock for $149.99 by clicking here.

No matter which option you opt for, though, you can’t go wrong with the Razer Viper Ultimate.