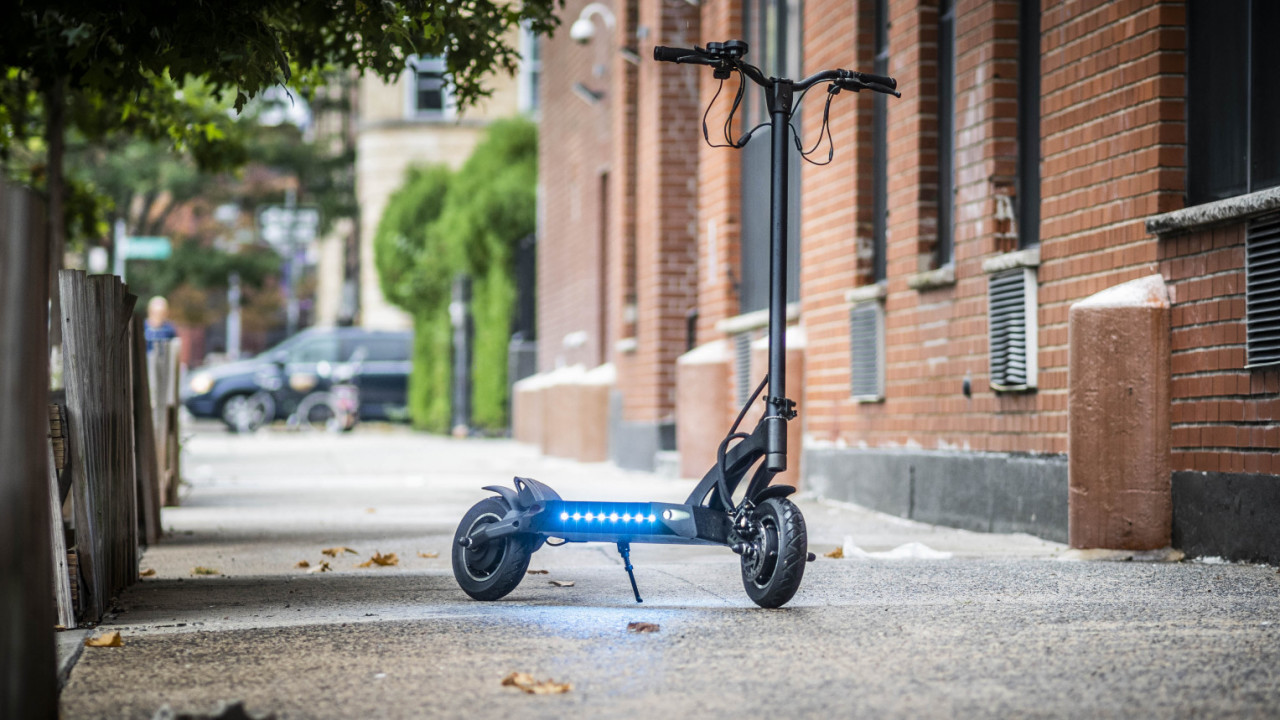 Let’s get this out of the way: you probably don’t need a 40mph e-scooter. Barrelling down crowded city streets at those speeds is a death wish, and if you’re going that fast, you should probably be required to have a license and registration.

But after FluidFreeRide let me try its new Mantis, a $1,499 vehicle I’d assumed to be complete overkill, I realized there are many legitimate reasons to want a 40 mph scooter. The Mantis’ powerful acceleration is incredibly fun, but it’s also simply built to a different standard than the cheap vehicles most people associate with e-scooters.

The Mantis checks all these qualities off and more, and at a price that is highly competitive for the features on offer:

I tested the base model for this review — it should cover most people’s power and range needs. But I intend to try the Pro version down the road, primarily for it’s additional range and slightly improved torque. I’m a heavy rider at 270 lb plus whatever gear I’m carrying, and as with any vehicle, range will vary with load. If you’re like me, you should expect less than the quoted range -but more on this later.

One of the first things that struck me about the Mantis is its build. It may not be as svelte as the Unagi or as sleek as the Boosted Rev, but on the whole, it seems more solid than any scooter I’ve tried.

It feels like it could take a beating — like it’s meant to be ridden as a serious vehicle. Even at high speeds, there’s no creakiness or worrisome flexing of the frame or handlebars. There was a tiny amount of play on the stem when I received it, but that was easily resolved by tightening a screw or two (it’s a good idea to double-check all screws when you first receive an electric vehicle anyway).

When folded, the scooter locks firmly using a little latch connecting the handlebars to the rear wheel assembly. Despite the 61 pound weight, I found carrying the scooter manageable to load into a subway or car – not that you’ll be doing that often. It’s also worth noting that though 61 lb may sound like a lot, the Mantis actually weighs significantly less than scooters in its performance class like the Zero 10x (77lb) or Dualtron Ultra (81lb).

I dig the looks too. The Mantis is made by Chinese scooter company Kaabo, and had a red and black trim in its original form sold in Asia. FluidFreeRide is the Mantis’ sole distributor in the US, and its custom build is almost completely matte black — a look that I prefer. It’s a utilitarian, stealthy design, but it’s also garnered several compliments and inquiries from curious passerby. If Batman owned a scooter, it might be this one.

I do have some niggles about the design. The scooter comes with a wide array of lights for night-time visibility, including brake lights, front lights, and side strips. It might be a bit extra, but no one will miss you coming. Unfortunately, little attention was given to the front-facing lights, which are not bright enough to really illuminate the road ahead of you.

You can and should buy a separate headlight, but I expected better at this price. Given its ability to easily ride alongside cars in city streets, I’d like to see turn signals on board too, which a few other commute-oriented scooters, like the Emove Cruiser, incorporate. In the meantime, I’m using the excellent Lumos Matrix helmet for turn signals.

Then there’s the fact the rear fender seems too small; my first ride on the Mantis was a couple of hours after a rainstorm, and the rear wheel’s spray managed to reach my pants throughout the ride. Lastly, though I appreciate having quick thumb access to be able to buttons for switching power modes, the labeling is confusing. It’s a relatively small issue, but make sure you double-check the manual to know what pressing each button does.

It’s also worth keeping in mind that this isn’t a compact scooter, at 49 inches long and 24 inches wide (the handlebar doesn’t fold for stability reasons). This isn’t a complaint, but something you should keep in mind depending on your travel needs. It’s still far smaller than a bike and relatively unobtrusive to bring into at a friend’s place or your office once folded, but you probably won’t want to bring it inside every store or restaurant the way you might with a more compact scooter. If you live in a city, you’ll probably want to invest in a good lock, which I typically looped through a hole at the front of the base.

Now for the important part: the Mantis rides like a dream, and it feels completely at home in New York City streets. It’s on an altogether different comfort level from smaller, more affordable scooters I’ve tried before, like the Unagi Model One or even FluidFreeRide’s own WideWheel. Two reasons come to mind in particular: acceleration and stability.

Again, I’m a heavy rider. I’d previously been impressed by the WideWheels acceleration, which was frankly more than enough for my needs, but I’d be lying if the Mantis’ sheer oomph at maximum power didn’t put a smile on my face. I pretty much never approached the scooter‘s top speed, but I liked knowing I could.

For most people though, I suspect using the single motor and/or eco mode would be enough. 1000W is already more than most scooters, and 30mph is at or above the speed limit in most cities (25mph here in NYC). Maxing out the speed settings is useful if you want to accelerate more quickly, but I found that even in the lower power settings, I was able to accelerate more quickly than most cars.

That’s not just about fun; it’s an important element in feeling safe on the road. While I stick to bike lanes whenever possible, there are many stretches of city road where bike lanes disappear and roads are too narrow to ride side-by-side with cars. When you become part of the traffic stream, being able to keep up with the vehicles around you adds significant peace of mind. Besides, it’s nice not to have angry drivers honk at you for being too slow while taking up a lane.

It helps that the Mantis’ throttle is impressively smooth and responsive, unlike the more twitchy WideWheel, allowing precise control over my speed — enough to easily keep a walking pace if I wanted to. Perhaps more importantly, the disc brakes performed admirably as well, able to stop me on a dime from virtually any speed I tried.

But my favorite part about riding the Mantis is the suspension, which I consider one of the most essential safety features on a scooter. The attack angle of big car and bike wheels means riding over a decent-sized pothole can be jarring, but is unlikely to lead to an accident. On most scooters with little-to-no suspension, riding over a relatively minor pothole at speed has the potential to send you flying over the handlebars.

With 10-inch, air-filled tires and dual spring-loaded arms with plenty of travel, the Mantis has the best suspension I’ve tried on a scooter and makes for a more comfortable ride than many bikes. It’s pillowy enough to ride over speed bumps and everyday potholes and hardly notice them, and the scooter‘s body feels like it can handle anything you throw at it.

While I still try to avoid potholes when possible, it’s nice knowing I don’t have to. After all, a sudden swerve to avoid a pothole you hadn’t noticed is also dangerous, but with the Mantis, I’m okay just riding over smaller deformities. The suspension makes for a fun, controlled ride that’s also good enough to hop the curb comfortable or even some light offroading.

The Mantis’ stability further contributes to the feeling of control. With a wide base and low center of gravity, the Mantis almost feels as stable as a small bike. It’s the only scooter I’ve tried on which I’m comfortable enough to take a hand off the bars to do hand signals at moderate speeds, although I’d still recommend purchasing proper turn signals. It also means I can give one hand a break from gripping the handlebars during an uninterrupted long ride.

And take long rides I did. The base model I tested is rated for up to 40 miles in eco mode, but such ratings are usually tested on a light-to-average rider. I was surprised to find I was able to consistently get between 18-23 miles riding with a mix of power modes, considering the 270+ lb load I put on the scooter. Using Eco mode only, I was able to get nearly 26 miles in one instance. The Mantis should, therefore, be able to handle most people’s commutes with aplomb, especially if you opt for the pro model with extended range.

All this adds up to what might be the fastest and most comfortable way to get around a city. The Mantis has the ability to ride in the bike lane, but can accelerate more quickly than cars when you need to join traffic. It has more power than similarly priced e-bikes, and you can save time by easily dismounting the scooter and walking it across the street at a red light (do-able but awkward on a bike). The suspension eats up potholes, and it has enough range to get you across town and back.

The proof is in the pudding: In almost every trip throughout Brooklyn, Manhattan, and Queens, I was able to beat ETA estimates for travel via car, subway, or bike – even though I consider myself an-extra cautious rider.

Sure, for most people interested in a scooter, the Mantis is overkill. It’s big and heavy, so it’s not ideal for mixing with public transportation. Unlike smaller scooters you can bring inside most venues, you might have to lock the Mantis outside. It’s probably not the best choice as a ‘last-mile’ solution. And again, almost no one needs to go 40mph on a scooter.

But sometimes, a bit of overkill can be a wonderful thing. The Mantis is exhilarating to ride at high speeds on empty streets, but it’s the smoothness, stability, and range of the ride that really win me over. The Mantis isn’t a scooter for multimodal commuters that regularly ride the bus or subway, but rather one designed to get you all the way there, with a wide grin on your face.

That it’s reasonably priced against the competition is just a nice bonus. The Mantis can be purchased from FluidFreeRide at promotional prices of $1,499 for the base model or $2,099 for the Pro model.