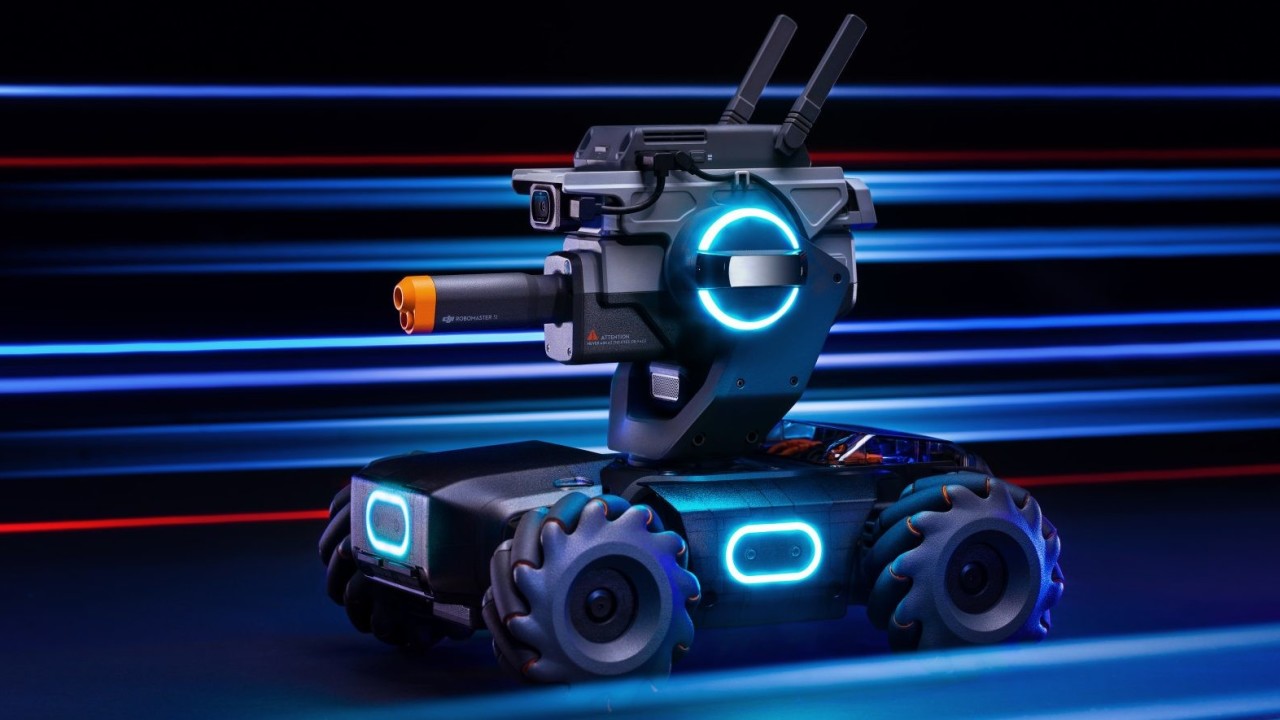 Everyone knows DJI for its drones and gimbals, but its newest device is a little more grounded. The $499 RoboMaster S1 is a tank-like remote control rover packed a wealth of movement options, a dextrous gimbal, a variety of sensors, and a blaster that shoots gel beads. It’s a remote control robot that’s meant to be as educational is it is fun – and from the 30 minutes or so I spent playing with it last week, that is a whole lot of fun.

Core to the S1 are its Mecanum wheels, a design that allows a robot to move in any direction, including strafing side to side. The S1 is able to stop on a dime and move back, forth, left, and right over uneven terrain with ease. Riding the wheels is a gimbal equipped with both infrared and gel bead blasters that basically allow you to play a remote-controlled version of laser tag or paintball.

This is all controlled via a mobile app, which taps into the S1’s camera and allows you to do anything from play battle and racing games (more on this in a bit), to programming the robot to perform a variety of tasks. The robot features some of the machine learning tech DJI’s developed through its drone research and can follow and recognize different visual markers, follow a person, recognize gestures, follow paths drawn on the ground, etc.

But that’s just what’s built in. People with coding know-how can program more all sorts of more advanced features using Scratch 3.0 or Python. You can program special maneuvers for your battle sessions, change the torque of the wheels, or even add custom accessories via six Pulse Width Modulation ports.

If you know nothing about code – like most buyers, presumably – DJI includes coding courses within the RoboMaster app that teach you by helping you program new features into your robot.

I had the chance try out the S1’s battle and racing modes, and it might’ve been the most fun I’ve had with a remote control vehicle since the first time I flew a drone.

The battle mode is essentially an IRL version of an FPS game. Using either your device’s touch-screen or an optional controller, you’re able to control your robot pretty much exactly like you would any FPS game.

Except, you can shoot real projectiles and you can see your robot moving in real life as well as your screen – and that makes everything way more fun. There was a small amount of latency to the video feed, but I was surprised at how quickly I was able to grasp handle moving the robot about. Like any FPS game, your goal is to blast your enemies until they die, and you can use visual markers around the play area as health stations or access special moves that give you an edge in battle.

It’s worth noting that the gel beads need to be soaked in water before you place them in the S1, and they’re very soft and highly unlikely to hurt anyone. This is especially true as DJI limits your vertical shooting angle, although the S1 includes goggles just to be safe (a few beads did ricochet ‘dangerously’ close to my face).

Next, I tried racing, which was more like real life Mario Kart. This time the goal was to maneuver around a course while marking each checkpoint by allowing your S1 to recognize the visual marker. Here the only caveat was that I had to slow down a bit for the robot to recognize the markers – I couldn’t just whiz past them in a frenzy. Still, it was a ton of fun, including Mario Kart-like weapons to annoy your opponents.

The Robomaster will be available June 12 for $499 at store.dji.com, and you’ll be able to buy a ‘PlayMore Kit’ with a dedicated controller, extra beads and a battery at a later date. I know it’s way early to buy holiday gifts, but you might want to start saving up.