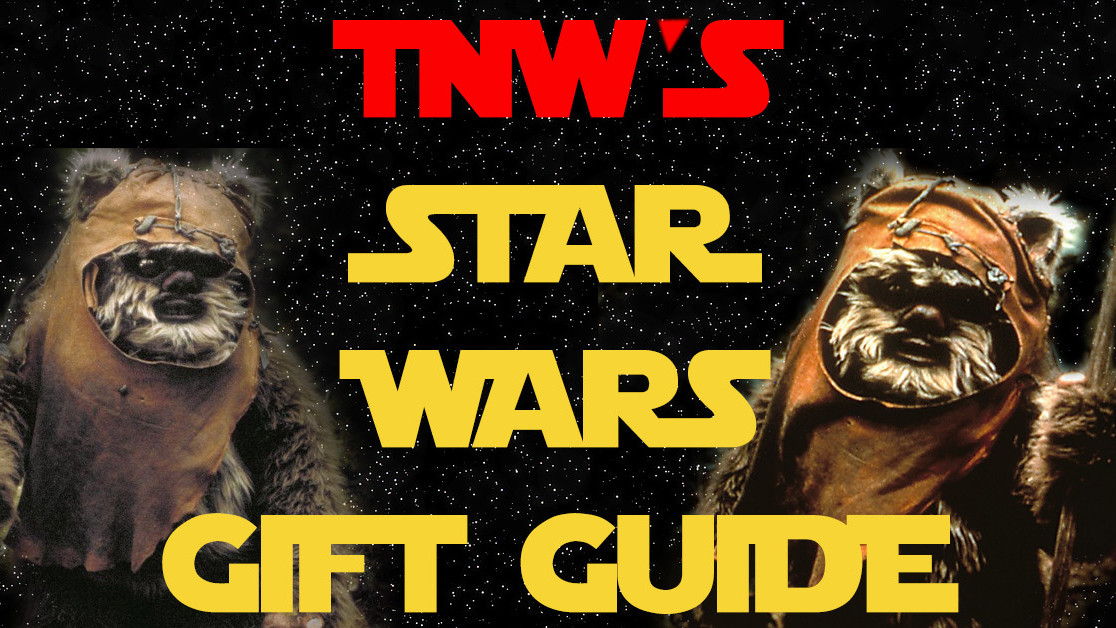 Unpopular opinion: “Ewoks: The Battle for Endor” is the best movie in the Star Wars universe. We won’t be taking questions, but here’s our Star Wars Day (May the Fourth) gift guide.

It’s been three years and that’s still one of the funniest, wholesome things we’ve ever seen. Chewbacca Mask Lady became so popular she was presented with an action figure in her likeness by Hasbro. The mask was sold out in stores and online for much of 2016, but they’re generally available now. You can get yours on Amazon here.

It’s 2019. We’ve moved on from Chewbacca masks and we’re all about badass female heroes who rely on their wits and courage to overcome seemingly insurmountable obstacles now. That’s right, we’re still talking about “Ewoks: Battle for Endor.” Cindel Towani, portrayed by then six-year-old Aubree Miller, was ahead of her time. So far ahead in fact, we weren’t able to find any merchandise related to the character aside from the art on the cover of this 2-disc DVD. Can that be right? Chewbacca Mom got an action figure but Cindel didn’t? Let’s just move on:

If you like Ewoks, you’re going to love these movies. The set is available here on Amazon for $33.95.

There’s another Star Wars movie featuring a badass female lead coming out this Christmas, but based on the trailer there aren’t any Ewoks in it. So we’re only going to get a little excited. The Rise of Skywalker does have a nice ring to it though.

If you’re already getting your outfit together to camp out in front of your local theater for a few days before Episode IX releases, you’ll probably dig this shirt:

There’s going to be the usual glut of new Star Wars licensed products for TRoS by the time May 4 gets here – but you’ll be in ahead of the curve with the understated but elegant tee above.

Shirts are nice, but we’re betting that, as a TNW reader, you’re interested in some of the less on-the-nose stuff the Star Wars universe has to offer. After all, TNW is enjoyed by executives and entrepreneurs. May I suggest a Millennium Falcon tie? Nothing says power-tie like the ship that made the Kessel run in 12 parsecs. It’s $19.99 here on Amazon and comes in a plethora of colors.

And, speaking of the most famous vessel in all of Star Wars lore:

We’re not going to pick a side in the Han VS Lando debate (but Donald Glover killed it in Solo). Instead, here’s the coolest Falcon kit we could find:

If you or your little one is looking for more building challenges, there’s the littlebits Star Wars Inventor Kit. It tasks kids with building and coding their own Droid, just like Anakin. Hopefully yours won’t turn out to be a Sith Lord too. Unless you’re a Sith Mom or Sith Dad, in which case: way to go. The kit’s on Amazon where it’ll run you $71.20.

On the other hand, if you’re a Rebel: you’ll spend most of the franchise stealing data, transporting stolen data, and hoping it’s not too late to use your stolen data to crack the code to the force field. You’re going to need somewhere to stow and carry all that stolen data. Here’s a cool Rebel laptop backpack that’s available on Amazon for $49.50 for Prime members:

Last year we included this Star Wars themed slow cooker ($11.42 on Amazon) in our May the Fourth gift guide:

We expected a handful of you would order them and then invite us over to your prequels viewing party for barbecued chicken or some other slow-cooked deliciousness. But our inboxes remain as desolate as Tatooine. Figuring you’ll shun us again this year, we assume you’re going to have a lot of leftovers. Store them in this mini-cooler so you can enjoy them again on a sandwich later.

We hope it tastes like betrayal – frozen-in-carbonite-Han knows what we’re talking about. It’s sold on Amazon here for $188.95.

Finally, our favorite Star Wars gift this year. It isn’t as cool as a fridge or as useful as a backpack, but it contains some of the most beautiful images from the greatest fictional universe ever created.

Star Wars Art: Ralph McQuarrie is a massive two-book set featuring art from the most iconic Star Wars artist of all time and the original designer of many of the robots in the films. It’s a gorgeous gift that’s perfect for your nightstand or your display case. You can get it for $129.32 on Amazon here.

We hope you found something you like in this gift guide – if not, check out last year’s for more ideas. Here’s hoping you have a spectacular Star Wars Day this year! May the Force be with you all.