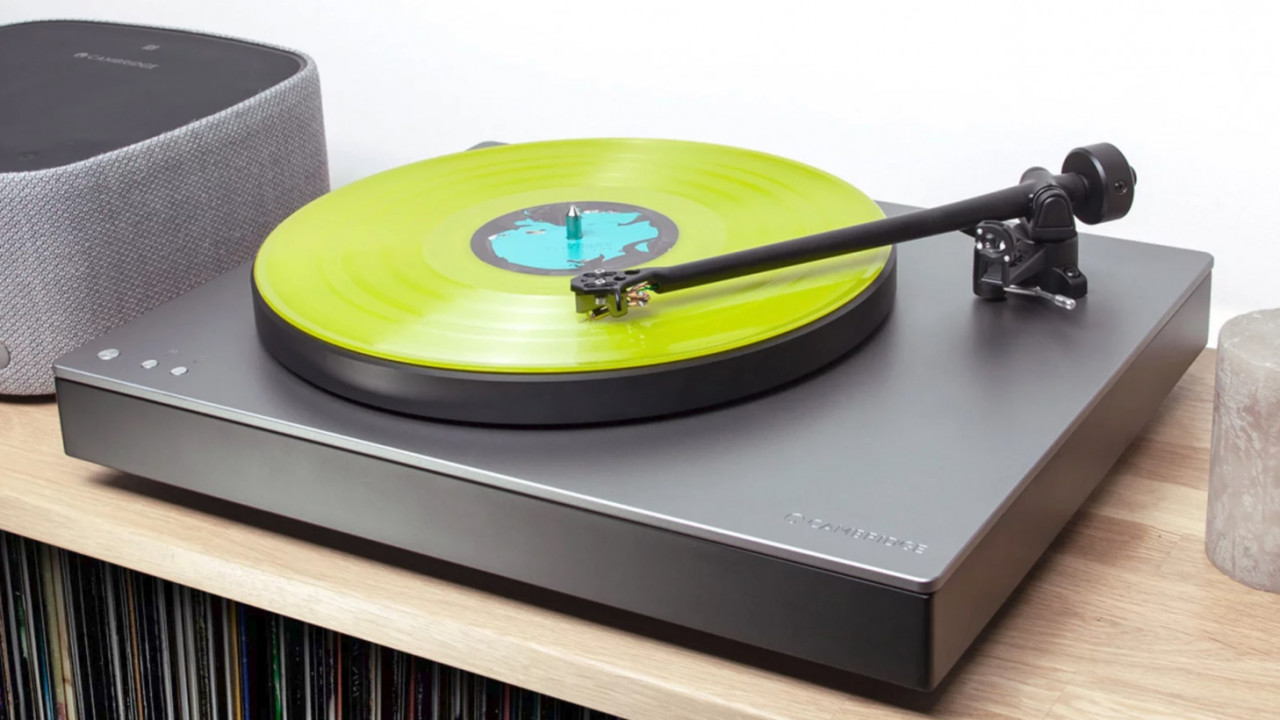 If you ask the audiophiles, vinyl never really went away. But it’s certainly seen a resurgence the past few years – growth ironically aided by streaming services. It’s easier than ever to discover new music, and when people find something they really like, they’ll often shell out to own it in physical form (just look at ebooks vs regular books).

Higher vinyl sales naturally lead to a greater demand for turntables, and a surprising number of legit manufacturers showed up this year. Although some of the turntables at CES have been demonstrated at audio shows previously, their presence at the conference was particularly notable given the show’s mainstream bent.

A few turntables tried to mesh the old with the new. Sony announced the PS-LX310BT, a £200 turntable with Bluetooth built-in (U.S pricing hasn’t been announced). We covered that here, but it’s basically an entry-level table with both analog and digital outputs for your convenience.

On the higher end of the spectrum, Cambridge Audio, a classic British audio company, announced the Alva TT. Like the Sony turntable, it features Bluetooth connectivity, but ups the ante s using AptX HD for high-quality wireless transmission. It also has a built-in phono stage so you needn’t mess with further external components. But unlike the Sony, it’s priced at $1,700 – extra money that likely goes into the materials, stylus/cartridge, and design. This one is clearly aimed at audio enthusiasts.

(By now you might be wondering why you’d want Bluetooth on a turntable. Some audiophiles would argue the entire signal chain should be analog. While that’ll probably sound the best, the truth is vinyl is generally more about the experience than achieving maximal sound quality – but more on this in a bit.)

There were turntables for traditionalists too. Audio-Technica announced not one, not two, but seven new turntables (one of these has Bluetooth as well). DJ favorite Technics – a brand that was nearly defunct a few years ago – is releasing a sequel to its classic SL 1200 range, as well the more mainstream SL1500. Audiophile brand TEAC teased a couple of new models as well. Budget brand Crosley even announced a tiny 3-inch turntable that can play four-minute records and features a legit Audio-Technica cartridge.

And this isn’t to mention the increasing releases we’ve seen outside of CES (we’re in the process of reviewing a few different turntables, including Fluance‘s new reference series).

So why has vinyl seen such a resurgence?

It’s safe to say most audio enthusiasts agree vinyl is an inferior format to digital when it comes to potential audio quality. But some argue its very limitations give the format indirect advantages.

One argument suggests the unlimited dynamic range of digital allows everything to sound loud and compressed (see: ‘the loudness war‘). Because vinyl is an analog, physical format, attempting to master music vinyl like much digital music would literally cause the record to skip. The grooves can’t handle such large jumps in volume at all frequencies, and as such, mixes need to be careful.

In other words, a digital track has every reason to sound better than vinyl,  but it’s sometimes not the case in practice (Vinyl seems to do better with older recordings than new ones).

Other people simply think the so-called ‘warmth’ of vinyl – even including the crackles and pops – sounds better than the ‘cold’ presentation of digital. It’s like applying a filter on Instagram. The image may technically be less accurate, but it could very well look better.

But setting aside quality debates, I think most vinyl lovers will tell you that it comes down to the experience more than the sound. Vinyl forces you to pay attention.

As you navigate through your record collection, you appreciate the 13-inch wide album art in a way that’s nearly impossible on your phone or PC. You place the record onto the platter, lower the stylus onto the outer rim, and wait with anticipation until the music starts to play.

You sit at your couch, listening attentively, or perhaps you do some work around the house. Either way, you’re compelled to listen to the entire album and re-engage with the music when it’s time to flip over to the B-side. Even when you’re not listening to music, you need to care for your records to ensure they last years.

Compare that ritual to simply opening up Spotify, playing your weekly mix, and leaving it at that. It’s more convenient of course, but it certainly doesn’t encourage you to listen in any meaningful way.

Don’t get me wrong. I’m much more of a digital guy, and I do most of my critical listening on the move. But I find myself increasingly appreciating the tangibility vinyl provides, and the reminder that most popular music was meant to be experienced as part of a cohesive album.

Where digital demands the bare minimum, vinyl demands your attention. In an era defined by bite-sized distractions, perhaps we need a little of the technology of yesterday. Bring on the turntables.