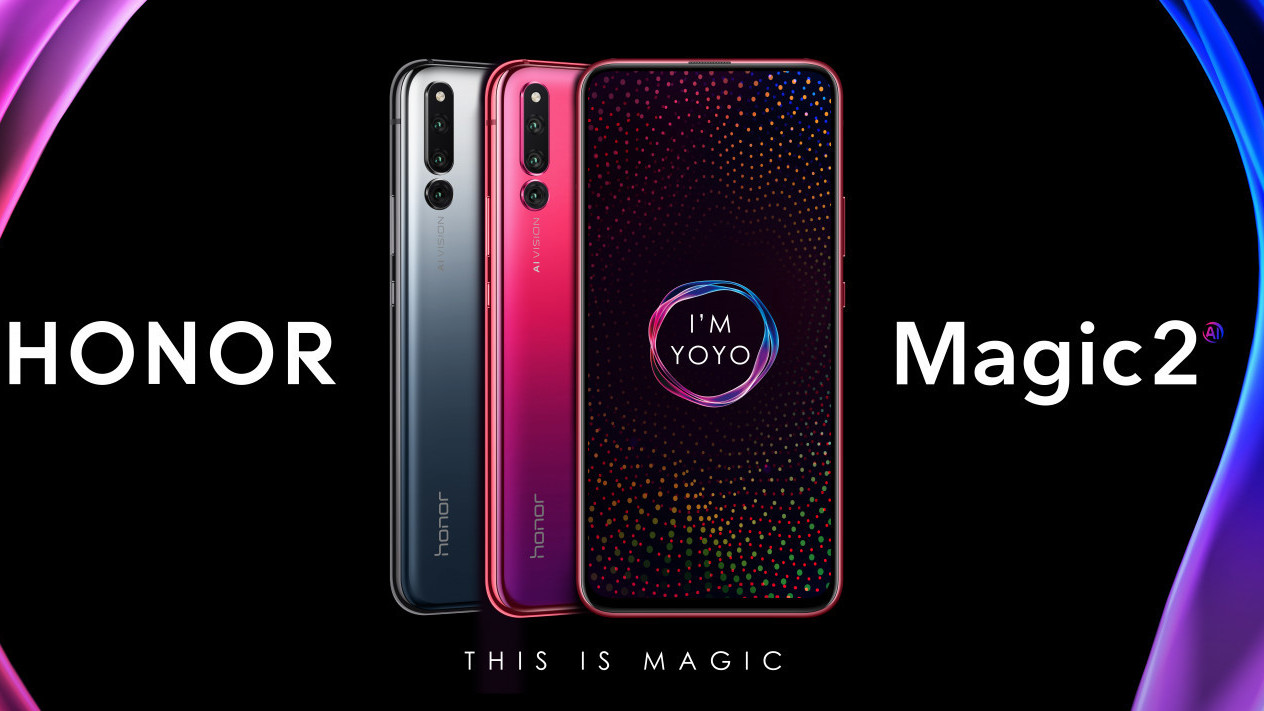 After teasing it back in August, Honor today formally launched its latest flagship phone, the Honor Magic 2, in Beijing, China. The high-end device is remarkable as it boasts one of the highest screen-to-body ratios currently available.

The Honor Magic 2 is almost entirely borderless, with wafer-thin bezels that are scarcely visible, and no unsightly notches to blemish the 6.39-inch AMOLED screen (which, by the way, also packs an under-screen fingerprint reader).

To accomplish this, Honor got a bit creative. Like the recently released Xiaomi Mi Mix 3, the Huawei sub-brand’s latest handset uses a slider mechanism which stealthily conceals the phone’s earpiece and 16MP triple-lens front-facing camera.

It goes without saying that this is an extremely unusual configuration, but according to Honor, there’s method in the madness.

It promises that the Honor Magic 2 will produce more visually stunning selfies, with better portrait lighting, improved bokeh effects, and a “beautification” feature that automatically airbrushes the user.

This is driven by Honor’s AI technology, which appears on the company’s most recent phones, including the Honor Play and the (still really decent value) Honor 10.

I’d also be remiss if I didn’t mention the fact that the phone also packs a triple-lens rear-facing camera. This comes in a 16MP, 24MP, and 16MP configuration.

Now, let’s get to what’s inside. Regarding storage, users get either 128GB or 256GB of space to play with. While that’s not quite in the same league as the Samsung Galaxy Note 9, it’s still more than enough for most users. You’re only likely to touch the Honor Magic 2’s limits if you’re using the phone to cart around your entire movie library, or to record a lot of 4K footage.

As for RAM, users can choose between 6GB and 8GB configurations. While 6GB is fairly generous and should offer smooth day-to-day performance, 8GB seems a bit much. Punters should only really go for this option if they’re concerned about buying a handset that’ll hold up over time.

The Honor Magic 2 is available from today in China. There’s no word yet of an international release, but it wouldn’t surprise me if it ultimately ended up on the usual purveyors of Asian tech goodness, namely GeekBuying, BangGood, and GearBest.

That’s pretty spectacular value for a six-camera all-screen phone, which packs specifications not far removed from the current generation Huawei flagship. That being said, if you do decide to import one, be sure to factor in import and taxes, which can be eye-wateringly steep.