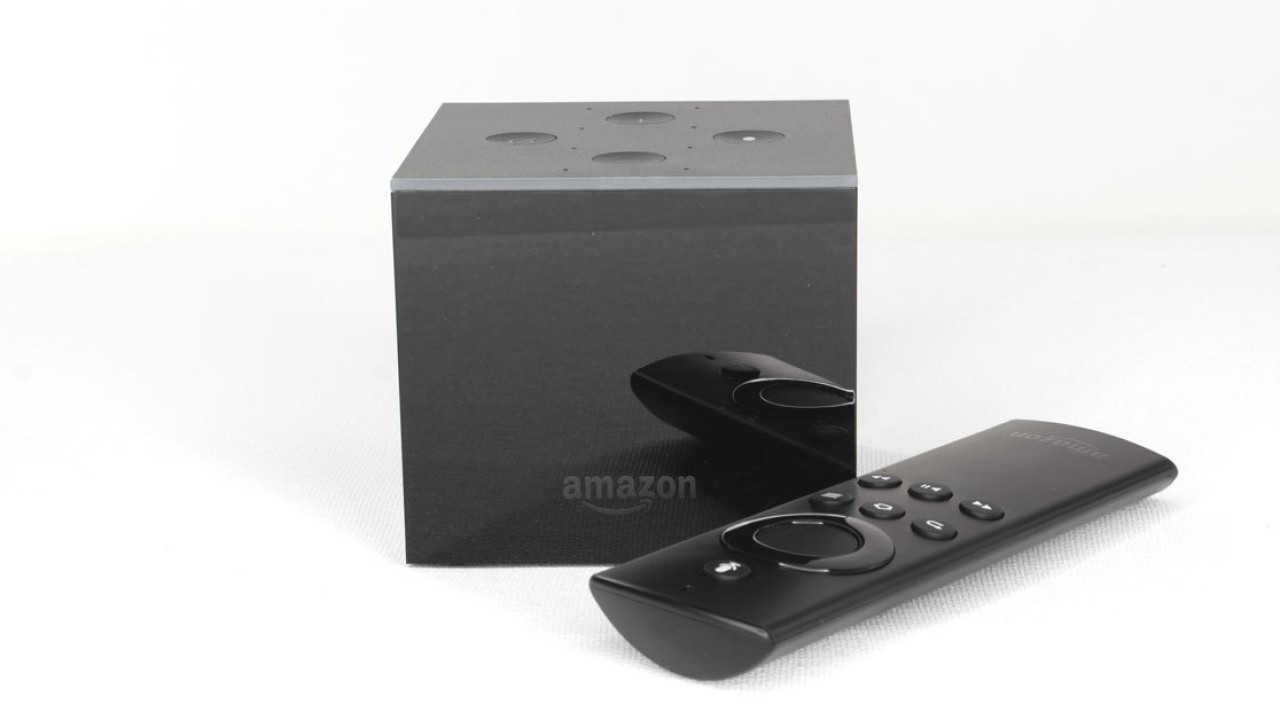 Amazon’s latest Alexa-powered gadget is a Fire TV and Echo smart speaker hybrid called the Fire TV Cube. Allow me to cut to the chase: This is the best Alexa experience you can get.

I wasn’t prepared for the Fire TV Cube. As a hardware reviewer, I try not to pre-judge equipment. I think it’s important to keep an open mind. But, I have to admit, I wasn’t looking forward to yawning over another “smart” speaker, or diving into yet another “all new” way for me to watch the same old shows. Luckily for me, five minutes after I plugged it in, I knew this one was different.

First off, it’s easy: Combining two different gadgets actually makes the Cube easier to use than any other streaming device. It comes with a remote that you’ll use for set up, scrolling through 3rd party apps and games that don’t feature full voice-support, and little else.

And it’s fast. It has the same processor as the Fire TV 4K with twice the storage.

If you primarily watch TV through Netflix, Hulu, and Prime Video you’ll find full voice-support for all three apps through the Fire TV interface. It functions much the same, in that regard, to using a Fire TV 4K device with an Echo. You can say “Alexa, find comedies” and it’ll display a list of comedies on the screen. You can then utter commands such as “select number four,” or “scroll right” to navigate.

It can also control your cable or satellite box, and supports voice-control for channel changing by name or number. For example, you can say “Alexa tune to NBA TV,” or “tune to channel 201,” and it’ll switch stations for you.

This is because the cube has an IR blaster built-in (with an included extender) that gives Alexa control over your TV’s power, volume, and input source. It can also control an audio receiver or soundbar.

Before I get ahead of myself, it’s worth mentioning that this thing looks absolutely ridiculous. It’s not even a cube! It’s wider than it is tall, but perhaps the marketing team thought people wouldn’t buy the “Amazon Fire TV Rectangular Prism.” 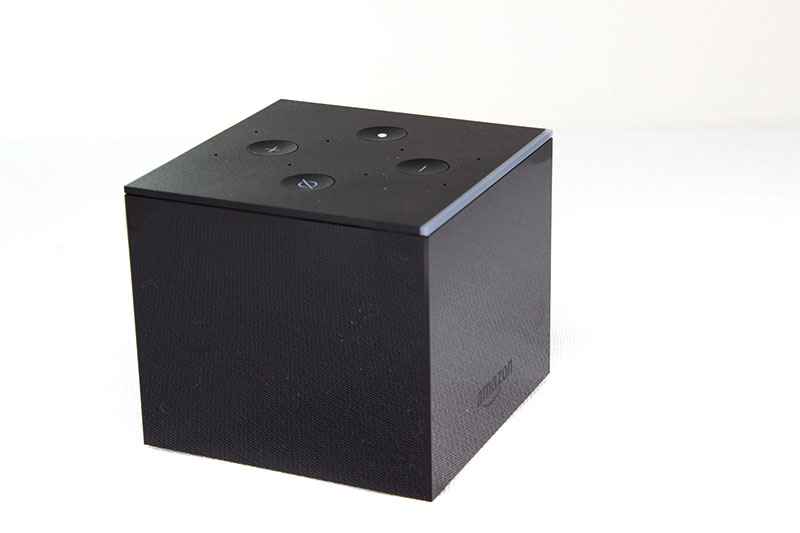 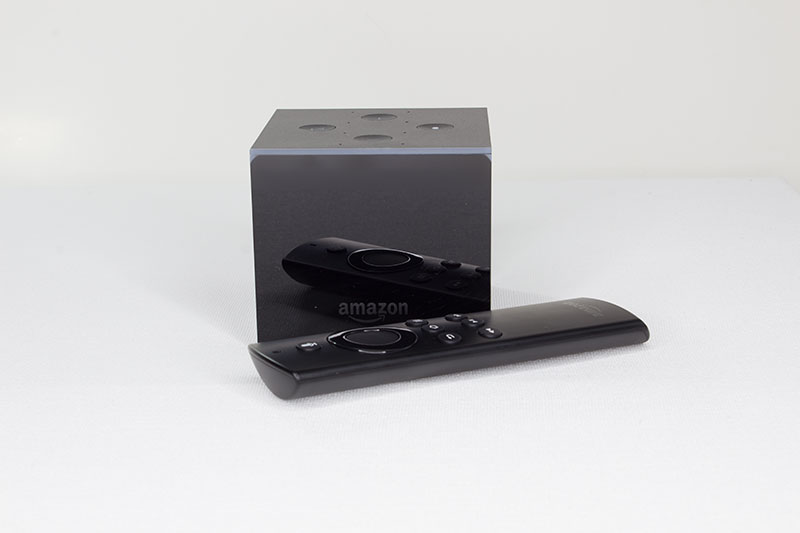 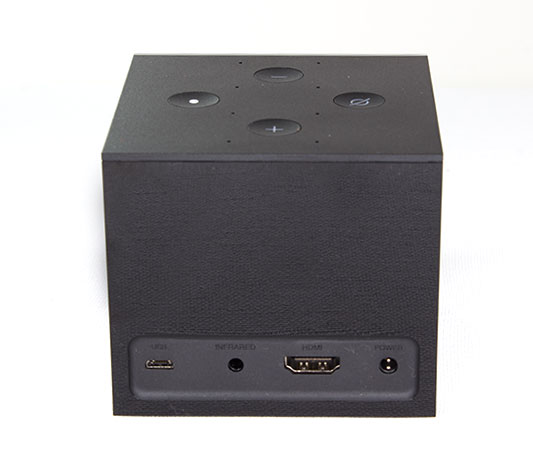 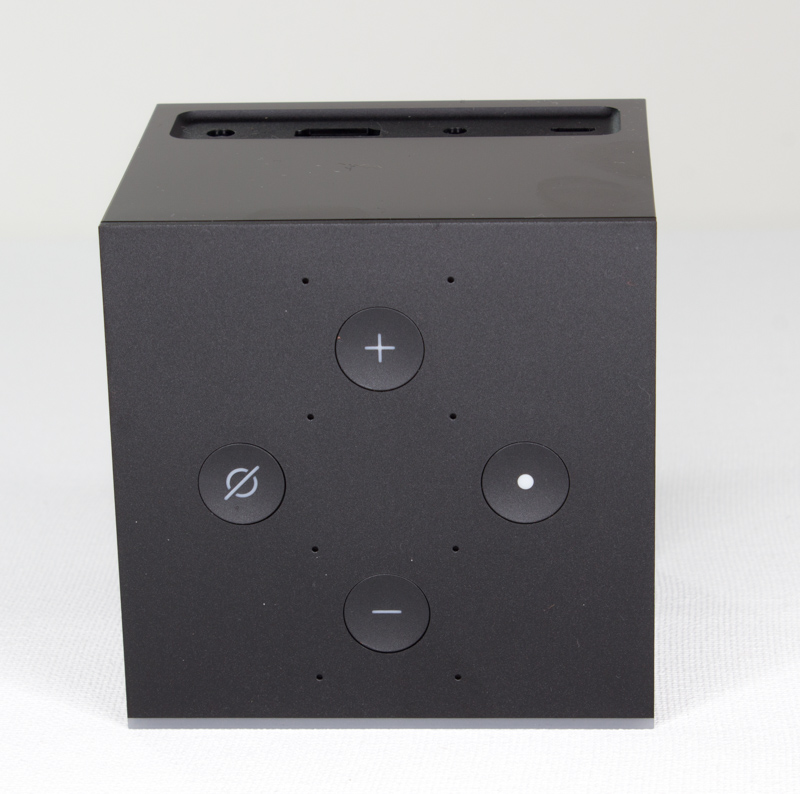 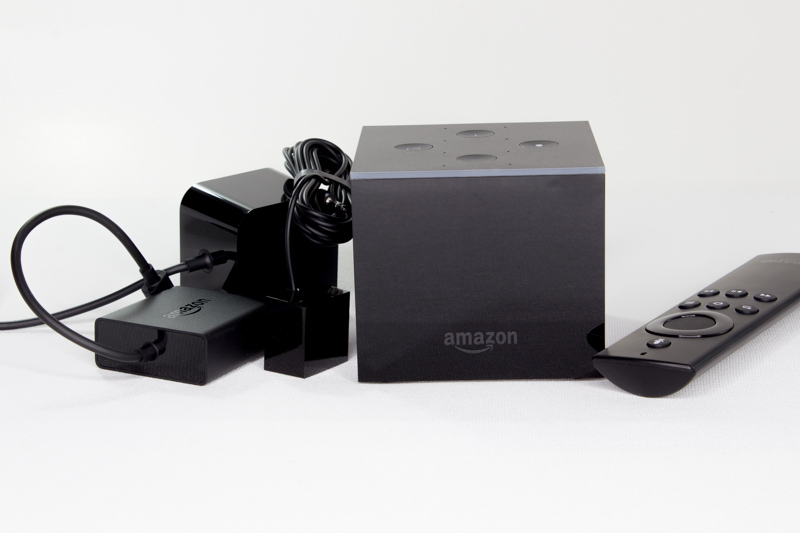 And my objections to its looks aren’t solely geometry-based: It’s a hunk of black plastic that attracts dust. I like the standard Echo-style navigation buttons on the top and the placement of the power cord, HDMI cable, IR blaster, and USB ports. But, I very much dislike the fact that it’s all edges and sharp corners.

I think it was designed to be put inside of an entertainment center. Perhaps the cube shape was meant to make it easier to squeeze along side your other gear. But, if you put it in a tight space, make sure you never slide your arm over it reaching for a cable or moving another device around: Its corners are sharp enough to cut you. Amazon needs to go with rounded edges on the next version.

Making it black is another strike against it. Typically I object to tech gadgets that only come in black because, with each new purchase, it feels like my home is being taken over by a creeping darkness.

In this case, I just think it’s a missed opportunity for this thing to be a smart light. Not only would that mean I could make it any color I wanted, but it’d also be highly functional for use inside an entertainment center.

One thing it provided aesthetically that no other device could, was the beauty of subtraction. To get the same functionality as the Fire TV Cube you’d need a smart remote with an IR blaster, an Echo Show or Fire HD 8/10 tablet with the Show Mode Charging Dock, and a Fire TV 4K streaming device. It makes more sense to just have one device that does all of that — and costs much less, as long as you already own a TV.

The Cube brings extended visual functions to the Alexa experience that are otherwise only found on the Show devices. With your TV turned off, for example, you can give the command “Alexa, how’s the weather?” to the Cube and it’ll give its normal audio report. But, if the TV is on it’ll display the forecast making it easier to see the weather at a glance. It can display news, recipes, nearby businesses, and other information as well. But the most fun addition the added visual experience brings happens when you start playing music.

Ask Alexa to play music like you normally would with an Echo speaker and it’ll display song information and lyrics right on your TV screen. The best part is that the lyrics are large and easy to read, and the Fire TV interface highlights and scrolls them just like the TVs in a karaoke bar. You don’t have to do anything to make this happen, it just works.

With the caveat that its built-in speaker isn’t much better than an Echo Dot – meaning this isn’t the smart speaker you should buy if audio fidelity is your primary concern – this is the best Alexa hardware I’ve used.