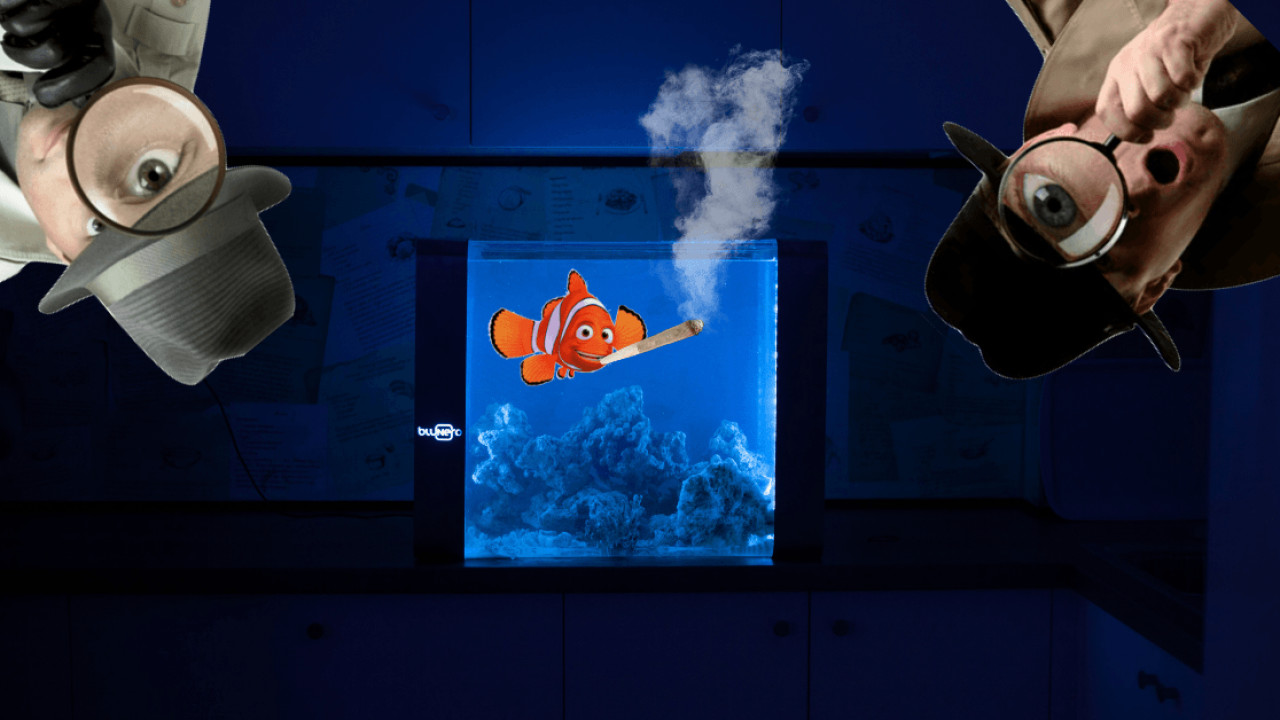 Ever had some pet fish? Did you enjoy watching them swim around? Was it calming? Therapeutic? Lovely. But – and I have to ask you this – did you ever wonder what those endlessly moist creatures were up to when you were out of the room? Smoking? Drinking? Having Finding Nemo-style adventures, maybe? Well, wonder no more, because the Bluenero is here.

What on earth is that?

It’s a smart fish tank and, according to the company, it’s the first one of its kind “on the market at this moment.”

Kinda. There are a lot of smart fish tank tools out there – like the Fishbit. the Seneye, or the Moai – but these are components that you place in your own aquarium, rather an all-in-one set-up, like the Bluenero.

This approach has been tried before though. The Dokdo tank ran a funding campaign, but didn’t raise enough cold hard cash to go to market. Another thing that kinda refutes this claim is that the Bluenero’s not actually on the market yet – it’s raising funds on Indiegogo.

So, to answer your question: sort of, but not really.

What does the Bluenero do then?

On the surface, it looks simple. It’s some clear plastic edged by stainless steel:

While it might look similar to the cheap green slime-covered, earthy saline-smelling fish tanks you’d get as a kid, this little sucker is rammed to the gills (aha!) with technology.

It has a HD camera, a full spectrum of LEDs, a UV filtration system, a heater, an oxygen pump, functionality for both saltwater and freshwater fresh, and an automatic food feeder. Basically, it does almost everything possible to keep our finned friends alive – a godsend for those of us who’ve won a goldfish-in-a-bag in a candy floss haze and failed to keep it swimming (read: me).

As seems to be the case with almost every bit of technology these days, with an app. Check out this illuminating gif:

From the hub on your mobile, you can check on your fish, feed them, and change the color of LEDs to fit the needs of the coral in your tank. Fancy stuff.

That is cool, but with all this connected stuff…

With the recent hack of a casino through an internet-connected peripheral in a fish tank, security is on a lot of people‘s minds – especially when this device will be in people‘s homes.

Vahe Tumanyan, founder and CEO of Bluenero, told me that the company uses “256bit SSL encryption to ensure security,” but didn’t go into further detail.

My take on this is similar to almost every other internet-connected device: proceed with caution and don’t blindly trust companies.

Okay, how much is this going to set me back?

It’s not exactly a bargain. I put this to Tumanyan who highlighted how much buying all the separate components for this set-up would be, before saying the Bluenero is “super cheap for the features they offer.”

When I did some research, getting similar components and collating them altogether would be a bit cheaper, but not a huge amount. Still, having it all in one working unit is pretty attractive.

It’s for the lazy or technological curious person in your life who has always wanted to keep fish, but has been afraid of sending them straight to aquatic hell (you know, where the shark from Jaws is).

Still, be aware that even the most highly touted crowdfunding campaigns regularly fail, so proceed with caution. It’s also worth to note that the earliest you’ll receive your Bluenero is in Q3 2019, something that regularly slips in these sort schemes.

Ultimately, Bluenero is a cool piece of kit that – hopefully – will make running an aquarium easier, something that I think will appeal to a lot of people. While it might not actually be the first time someone’s tried to create an all-in-one smart fish tank, the Bluenero might actually succeed.

Also, it’ll let you spy on your fish from wherever you are. What more could you want than that?