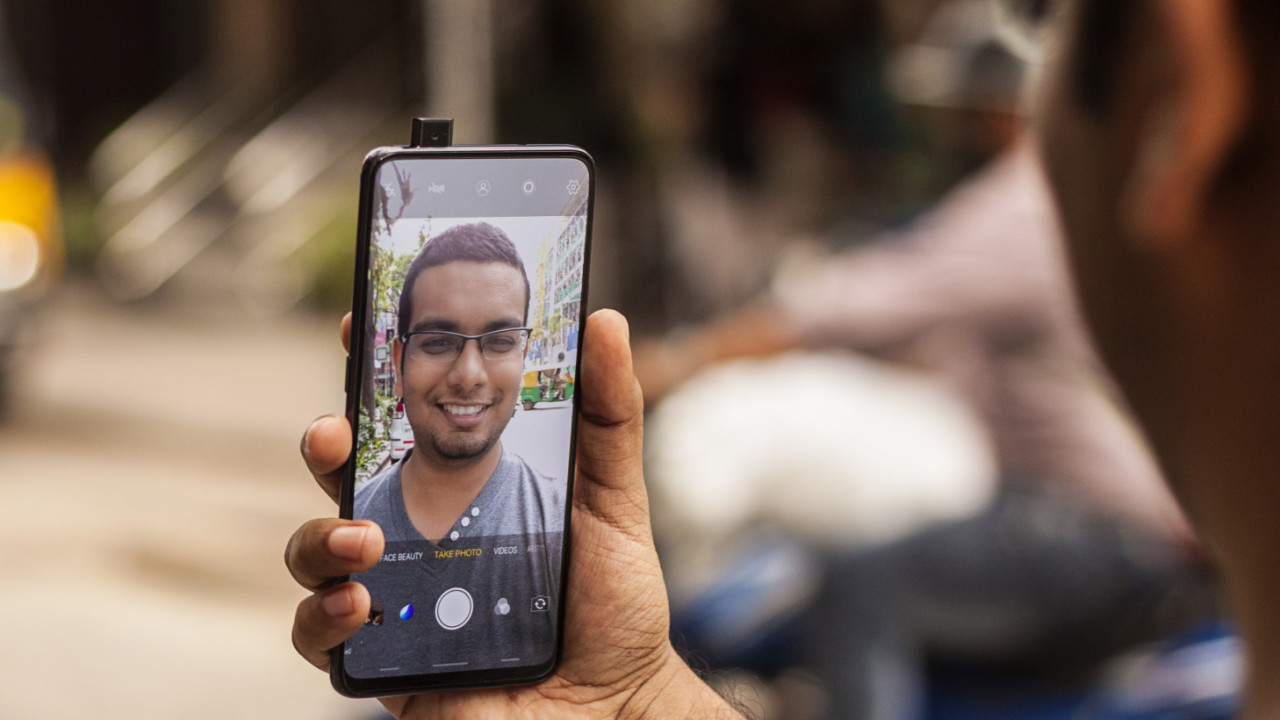 Back in February, when we were still recovering from the barrage of Android devices that had a notch cut out of their displays similar to the iPhone X, Vivo blew people’s minds with its Apex concept phone, which featured a truly bezel-less display.

The company had figured out a way to hide sensors, the earpiece, and even the selfie camera with a bunch of innovations that we’d never seen before. Last month, it brought that concept to life with the launch of the NEX.

It’s a remarkable achievement, and Vivo’s done a great job realizing most of the ideas behind its revolutionary new device. I spent the past few weeks living with the NEX to see if it’s worth owning for more than just its ‘wow’ factor.

The NEX is a humongous phone, with a 6.59-inch screen housed in a metal frame and a specially treated glass back. It’s taller than the OnePlus 6 by a bit, just a little bit thicker, and a whole lot heavier. At 199g, it’s heavier than pretty much every other flagship from the past year, and you’ll certainly be able to tell the difference when you hold it.

There’s nothing to look at on the front, of course. But flip the NEX over, and you’ll find a dark glass back that beautifully reveals a rainbow of colors when it catches the light at certain angles. There’s also a bold red colorway if that’s more your speed.

Sadly, I rarely got to enjoy the finish because the NEX’s unwieldy size necessitates the use of a case, lest it slip from your hands as you stretch your fingers to reach a button.

The NEX looks stunning when it’s lying flat on a table and lights up – it’s a treat to see the bezel-less display fill up with color from edge to edge.

As you’ve surmised by now, the NEX has a bunch of cool tricks up its sleeve. For starters, the earpiece’s functionality is handled by the screen, which has an exciter unit that causes it to vibrate and deliver call audio. It works surprisingly well, to the point that it’s hard to tell that you’re not hearing sound come through a standard earpiece.

You’ll also find some neat touches like a USB-C port for fast-charging the 4,000mAh battery, a headphone jack, support for dual SIM cards, and plenty of storage space (you can choose between 128GB and 256GB options – my review unit came with the latter). The NEX doesn’t charge anywhere as quickly as OnePlus’ recent handsets with Dash Charging though, so you’ll want to chalk out some time to juice it up for the day before you step out.

The fingerprint sensor is built into the display, and it works only on the small area highlighted by the animated icon near the bottom of the screen. Vivo says that this is the third generation of its in-display sensing technology, and that it’s a lot more accurate than before – but it frankly doesn’t hold a candle to dedicated sensors.

With recently launched devices like the OnePlus 6, your phone’s unlocked by the time you whip it out of your pocket; with the NEX, you’ll have to give it a bit of time, and aim accurately. You might also need to register the same finger a couple of times to reduce faulty reads. Still, it’s not a deal-breaker by any means.

Vivo also talked up the NEX’s Hi-Fi audio feature, which seems to push the audio output through its 3.5mm jack with a bit more power than usual, for increased clarity and detail. The effect is subtle, and your mileage will vary depending on the source of audio and the capability of your headphones or speakers – but it’s a nice touch that sweetens the deal for those who enjoy their music on the move.

The handset runs Android Oreo 8.1, with Vivo’s Funtouch OS 4.0 skin on top. That’s perhaps my least favorite thing about the NEX: Funtouch OS seems to slow the device down in comparison to other devices with similar hardware like the OnePlus 6, and the interface isn’t quite as easy to navigate as other flavors of Android I’ve tried.

It’s a bunch of several little things that bother me about Funtouch OS, like the unnecessary inclusion of ‘lockscreen posters,’ (who needs to scroll through images on their lockscreen?) a poorly organized settings menu, the lack of an OTG toggle in the quick settings panel for my USB-C earphones, and the requirement of a Vivo cloud account to be able to replace the stock launcher (registration didn’t work for me in China or at home in India, and neither did credentials from a bunch of accounts).

Oh, and the launcher doesn’t have an app drawer, so you’ll have to organize your home screen on your own. Ugh.

If you’re in China, you might appreciate Vivo’s Jovi AI assistant. It responds to voice commands in Mandarin, and currently supports some 600 actions, including things like changing settings and accepting money from friends in WeChat group conversations. You can’t control connected home gadgets, though, and it doesn’t yet work with other languages – but it’ll be interesting to see how Vivo tackles this when it begins selling the NEX beyond China’s borders.

The NEX is about as powerful as any phone you can buy right now, with a Snapdragon 845 chip, an Adreno 630 GPU, and 8GB RAM. It handles just about any app you throw at it like a champ, including browsers, video editors and graphics-intensive games. It’s also lightning-quick when it comes to firing up the camera, flipping through loads of photos, and downloading and installing apps.

Sadly, Funtouch OS isn’t quite as snappy as it should be: functions like switching apps take longer than they should on a device with these specs. It also isn’t as flexible as other Android flavors, and has annoying quirks (have I done these already) like unmutable notifications from the preinstalled browser.

The Super AMOLED screen gets bright enough to read in daylight, and it’s a joy to use apps that take advantage of its true black display capability for books and browsing Reddit. It could be a bit sharper given its size.

That said, the 1080p resolution allows for longer battery life than a higher resolution screen would. The bezel-less display is truly delightful to use for watching videos and browsing your photo albums – even if you’re not as bothered by notched displays as I am.

The mono speaker at the bottom of the device is adequate for gaming on the bus or watching Netflix in bed, but it’s nothing to write home about.

I’m happy to report that the NEX’s massive 4,000mAh battery easily lasted me more than a day. Even after taking several pictures, browsing social media and web pages, streaming music, and gaming through a long day, I had some 20 percent of juice left – a nice tradeoff for its large size.

The NEX comes equipped with a 12-megapixel + 5-megapixel dual camera system on the rear, with serviceable HDR and portrait modes, and seriously fast auto-focus. For the most part, it’s good at reproducing colors and capturing detail – but it’s not great at measuring exposure, and it often overexposed my shots when left to figure things out on its own.

Here are some samples straight out of the camera:

It also does well in low light conditions, focusing fairly quickly and shooting sharp photos without a hitch. I had no complaints about its video mode either, but I suspect that people who use it more often than I do would appreciate more manual control while capturing footage.

There’s no optical zoom on the NEX, which is a bit of a disappointment: having used several phones that came with the feature in the past year, the omission is glaring because it offered another way to compose pictures.

The elevating front camera pops up in a second and snaps 8-megapixel photos, and lets you take portrait mode selfies, and even adjust lighting a la the iPhone X. It takes crisp photos and doesn’t fumble with colors. However, I found the lighting effects to be too subtle to bother with.

I didn’t mind the pop-up camera’s one-second delay for taking selfies, and haven’t seen it malfunction even once in the past few weeks when launching and shutting down camera apps. However, I was told by avid Snapchat users that this wouldn’t fly; the risk of losing a chance to capture a memorable picture was too great. Different strokes for different folks, I guess.

The camera app itself offers plenty of options for taking pictures, including an AR Stickers mode, a surprisingly quick panorama mode, and a flexible Pro mode. My only niggle with it is that you have to swipe up or down multiple times to adjust the exposure, and that can cost you precious moments when trying to capture a shot; it’s a bigger problem than it would be otherwise, because the NEX tends to overexpose pictures.

Is it worth the hype?

Before we talk about whether the NEX is a good buy, I want to reiterate that Vivo should be commended for taking some bold risks that not only help this device stand out, but also pave the way for the brand to lead the charge with innovative features in the future.

Product manager Charles Ding told TNW that the company had the idea to develop a truly bezel-less device two years ago, before we began to see phones with notched displays. He added that the company has a tradition of bringing features over from flagships to other models in its lineup, and that it’s possible we’ll eventually see smaller phones with pop-up cameras and all-screen front fascias. As someone who’s still in love with the diminutive form factor of the iPhone SE, I can’t wait for Vivo to give that a go.

Who’s the NEX for?

The NEX offers excellent performance, great cameras, and a bunch of features that set it apart from the competition. If you’re keen on a truly bezel-less screen, it’s one of the few devices that can claim to offer that, and is in the company of the Oppo Find X, and the Mi MIX 2S.

It’s also humongous, and so it might prove to be a bit much unless you have giant paws. Plus, my experience with the edition meant for China wasn’t the smoothest – but I imagine that those kinks will be ironed out when it launches elsewhere in the world.

At 4,998 RMB ($752) for the 8GB/256GB variant, it’s pricier than devices with similar hardware like the OnePlus 6, HTC’s U12+, and Xiaomi’s Mi 8, and veers close to the territory occupied by premium flagships like the Google Pixel 2 XL and Samsung Galaxy S9+. It will likely lose points for its lack of water resistance and top-of-the-line cameras – but for that price, you’ll get terrific performance, and some unique features and a device that you’ll remember well after you’ve ditched it for a newer, more svelte phone in a couple of years.

The NEX has launched in India as of July 19 with a starting price of Rs. 44,990 for the 8GB/128GB version. Find out more on Vivo’s site, and pre-order it on Amazon India here.