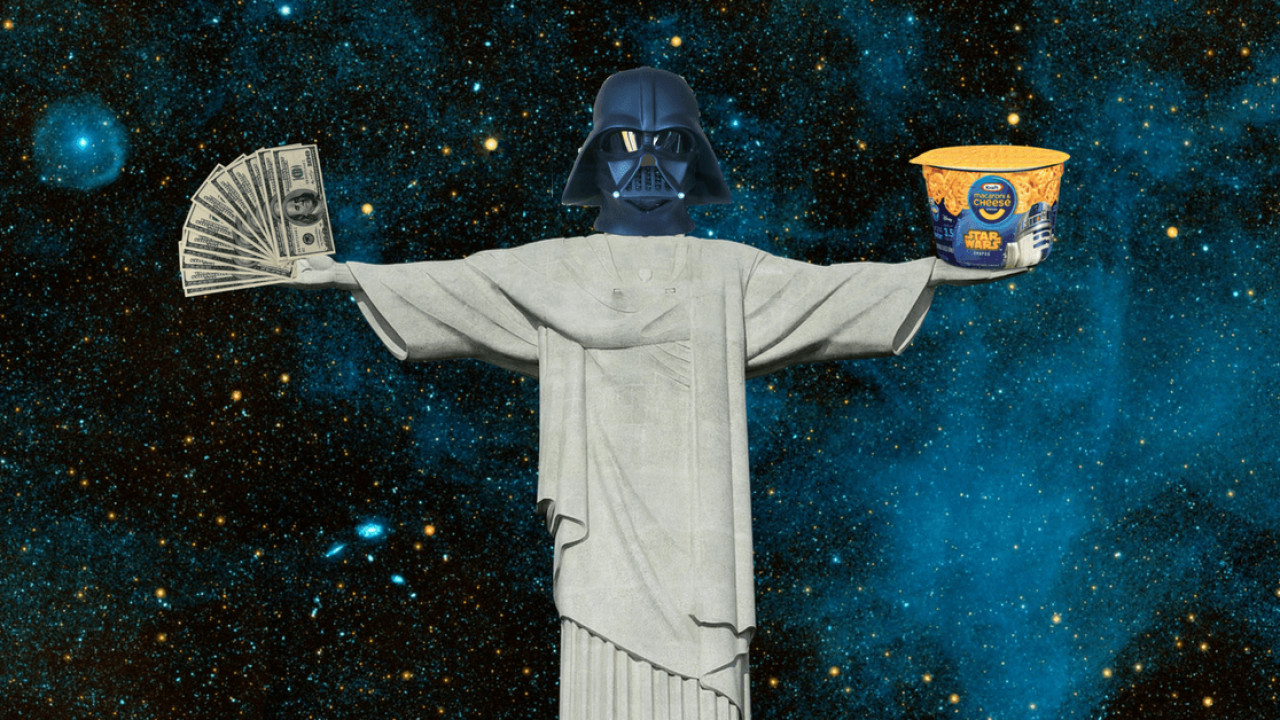 There’s a simple rule in the entertainment world: if it’s popular, merchandise it. And, let’s be honest, what’s more popular than Star Wars? Religion? Not these days, buddy. Let’s put it this way: Passion Of The Christ only made $612 m at the box office, while the latest Star Wars movie raked in $1.32bn. Case closed.

So, in honor of this May the Fourth (get it? GET IT? AHAHAHA), we thought we should serve the people and put together a list of some of the… stranger Star Wars products your money can buy. For, just like Christmas and Easter, what’s a celebration without commercialism?

Picture the scene: your old Da’ is in his cargo shorts, toolbelt wrapped around his waist. He’s covered in dust from, for some unknown reason, trying to fix a leak by hammering through the drywall to reach the pipes. But, oh lord no – water starts spewing everywhere. He screams at you to get the tape. You pass him a normal roll of duct tape and, as he holds it in his hands, you see in his eyes how let down he is, how he can’t believe he raised a child who would’ve done this to him. He shakes his head and sighs.

You should’ve given him the Star Wars tape. You’re such a disappointment.

Hurtling through hyperspace and engaging in death-defying space battles sure does build up an appetite. So what do you do in these situations? Grab a sandwich? Get a microwave meal? Order take-out? Han Solo would be rolling in his grave.

We all know the most exciting, radical and extreme cooking style: slow cooking. Shove your ingredients in this themed crock-pot and, in just 12 rip-roaring hours, you’ll be ready to eat a great ragù.

I like to picture the meeting when this product was pitched. Executives sitting around a whiteboard, trying to come up with the next great tie-in. They’ve already done board games, t-shirts, books – all the normal stuff, then a solitary voice pipes up.

“What about a… shower head?”

Everyone turns to look at the speaker.

Smiles creep over the faces of the assembled.

“That blasts water out of its face, all over your face.”

I’ll give you this one for free: there’s absolutely nothing heartbreaking about sitting by yourself and eating ten packets of microwave mac & cheese one after another. Nothing.

Also, it might just be me, but the images of the “pasta” on the packet look suspiciously un-Star Wars influenced. Hold on… is Kraft scamming me? Is this just normal mac & cheese with R2D2 on the box?

Whenever I return home from a hard day’s work, it’s not a cold beer or warm food that I crave. My tastes are far more… precise. What I want is a robot that both vacuums and breathes like Darth Vader.

In a totally, one hundred percent non-sexual way of course. Who gets turned on by a product described as an “edge clean master” or having “20x more powerful suction?” Weirdos, I guess.

(Thank you for making my dreams come true, Samsung, luv u)

Ever played Bop It? Arguably the most 90s toy ever, it’s a reaction game where the weird fun stick shouts at you to fiddle with it. If you fail to fiddle in the right way, you lose.

This is all good and well when you’re doing it to a stick, but a sentient robot? It might just be me, but there’s something off about R2D2 shouting at me in a creepy faux-English accent to “pull it” and “twist it.”

Most mornings, getting out of bed is like wading through treacle, but not today. Your stomach trembles in excitement as you double-check your phone. It’s here, the day is finally here! You rummage through your wardrobe, scrambling into the t-shirt as fast as possible. Looking at your reflection, you click your fingers, wink and say, “May the fourth be with you.”

What a goddamn great day.

In our last edition of HO£IDA¥ GUID€$ we looked at weird weed products in honor of 4/20. Read that one here.