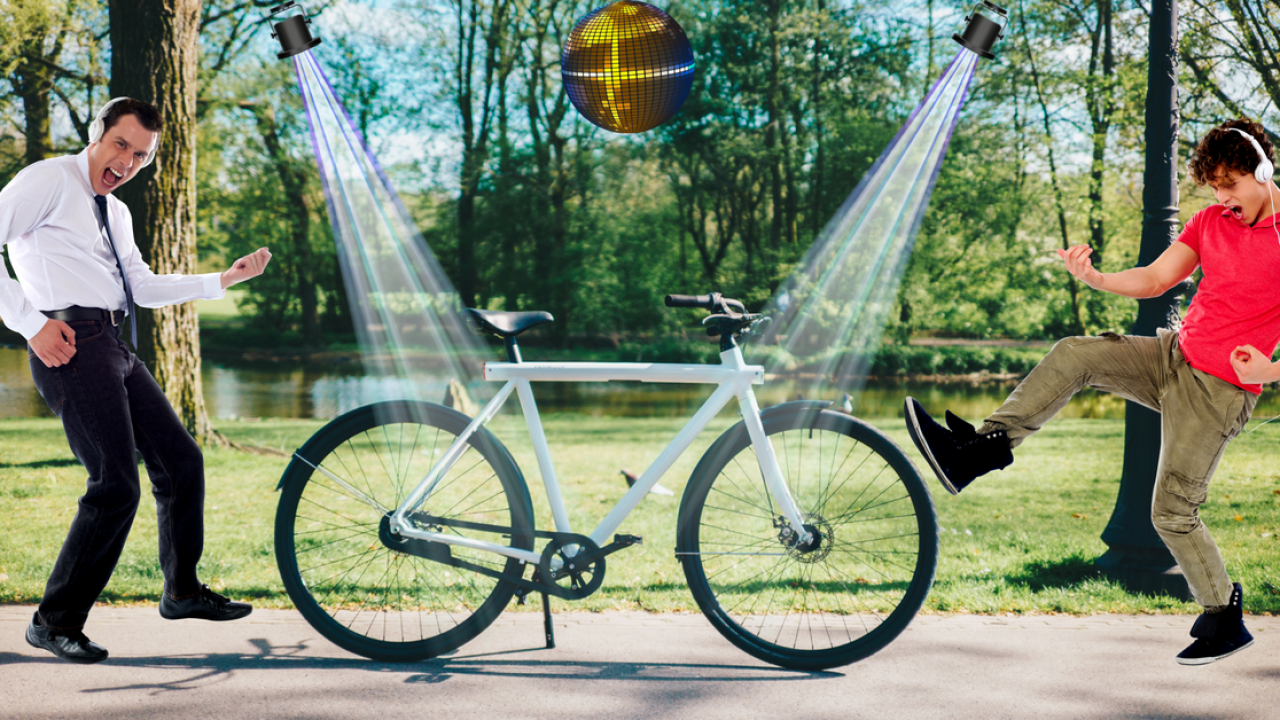 VanMoof – the Amsterdam-based bike company – has launched the Smart series, its new range of two-wheelers. These bikes are the first available on the company’s new subscription service, VanMoof+. It claims that its new advancements, in particular the sound engineering, take us one step closer to a lockless world. Well, for bikes, at least.

We went to its offices in Amsterdam to try out the bike and speak with co-founder – and very tall man – Ties Carlier. He said one of the key issues for VanMoof is people prefer using “shit bikes” in cities out of fear for theft, something the company have made a priority tackling.

It has made steps to address this before with its (paid for) Peace Of Mind service. If you subscribe to this initiative and report your bike stolen, its dedicated team of Bike Hunters track it down. If they can’t find it within two weeks, they’ll replace your bike free of charge. It seems successful too. The Bike Hunters find 70 percent of the stolen bikes compared to a recovery rate of 4 percent in the EU as a whole.

Carlier’s vision is a world where “we don’t lock our bikes at all,” but realises this has to go “step-by-step.” So, with the Smart series, he wants to eliminate the large chain lock, acknowledging that the smaller back-wheel one common in Amsterdam will have to stay.

How does VanMoof plan to do this? With its new rider recognition and theft defence systems. Through Bluetooth, the bike notices when its owner is near and disables its alarm, but, when it’s fiddled with by a stranger, the Smart series starts to wail. Albeit, in a different way to what you’d expect.

Working with composers and sound designers Nando Eweg and Melcher Meirmans, VanMoof focused on creating noise that spooks and unsettles thieves, rather than alerting the public. The idea is that the general populace have become immune to the screech of sirens on cars and mopeds, so trying to prevent theft by warning them is, well, pretty pointless.

Its theft defence system works across three stages. The first is a sonar-esque beep. Then, after around thirty seconds, the second part starts. The beeps accelerate and guttural, sci-fi noises swell underneath the sounds. Finally, after about a minute, the noises and the bike’s features are disabled – apart from the lights blinking SOS in morse code.

You can get an idea of it in the below video. One thing to note, it doesn’t do full justice to the noise, as the speakers in the bike kick out an impressive array of frequencies that make it quite uncomfortable to listen to.

As interesting as this approach is, I’m sceptical about whether this would actually stop anyone, you know, just putting the bike in a van and driving off.

Carlier responded by saying that the market for stolen VanMoofs is small, due to the bike’s features – such as the lights – being disabled when reported missing. He then pointed out that since the 2016 launch of the Bike Hunters, the number of VanMoof bikes being stolen have dropped, with thefts going down 20% in the last 6 months alone. All good and well if you subscribe to the Peace Of Mind service.

Looking through the T&Cs, the Bike Hunters will help you recover or replace your VanMoof for free once, then the next two times will cost €98. If it happens a fourth time? You’re on your own. To be fair to him, Carlier did say that he wouldn’t recommend leaving VanMoof bikes outside at night, despite the new tech, so I guess we’re not in a bike-thief free utopia yet.

With the Smart series more ‘connected’ than previous models, I also brought up the issue of hacking. VanMoof agreed that this is more of a possibility now the bikes are ‘smarter’, but said it has rigorously tested the security. The answer was vague, but with no breaches so far, it’s hard to be too critical.

Now, the updates are interesting, but you buy a bike for one main reason, so…

How does it ride?

In a nutshell? Great.

We tried out the three-geared Smart S, which is the straight-framed model, and it was a pleasure to use. The steering was tight, the breaks responsive, and starting from stationary was a cinch in each gear.

The bike was also deceptively light:

The overall build quality is great, something the company puts down to designing all the parts itself. Carlier expects that – aside from pumping the tyres or dealing with an occasional puncture – you should be able to ride the Series S daily for two years without maintenance.

Of course, this is something we could only confirm by riding one for that time period, which, if you’re reading this VanMoof, is a project I’m willing to take on.

Then you have the aesthetics. Just look at that hot piece of metal and rubber. Mmm.

Build-wise, the only issue I had was with the kick-stand. To use it, you have to make sure the left-hand pedal is raised, otherwise it’d get caught and not pop out properly. A small irritation, but an irritation nonetheless.

The quality comes at a cost though. The Series S or X frame starts from €898 for the 3 speed model, rising to €1098 for the 8 speed version. Which, considering the low price of second hand bikes in many cities, is, well, an awful lot of money.

VanMoof is obviously aware of its prohibitive pricing, something that must be partially behind its introduction of VanMoof+ – a subscription service for a single bike.

You’re charged a one-time “key fee” which starts at €298, before paying €19 a month, something that includes maintenance and theft-protection. If you decide to leave the service, you can also sell on your subscription and recoup some of that initial “key fee.”

Is it worth it though? Well, this is where ‘pub-maths’ comes in. Asking around the office, it seems that – on average – people get their bikes stolen in Amsterdam around 1.5 times a year. The average bike seems to cost in the region of €100 (with some people paying €50 and others €200), with maintenance expenditure hovering around €20.

So, folks are paying in the region of €170 a year for their second-hand bikes, while using VanMoof+ in conjunction with the basic Smart series would set you back €228 (not including the key fee).

It does well next to competitors too. A similar service is offered by SwapFiets – including maintenance and repairs – that costs €15 a month. The bike is nowhere near the same quality, yet has no initial outlay.

It comes down to personal preference. The VanMoof Smart S is a lovely bike, but whether it’s worth it to you depends on a lot of factors in your life. If you have a long commute, or just enjoy the finer things in life, it could be right down your alley. While if all you want from your bike is to get you from A to B – and you don’t care how it does it – the new model and subscription service won’t change your mind.

As much as I love the VanMoof Smart series, I think I’ll stick to my current crappy one. For now. When it gets stolen though? It might be a different story.

You can find out more information about the new bikes here and the VanMoof+ subscription service here.