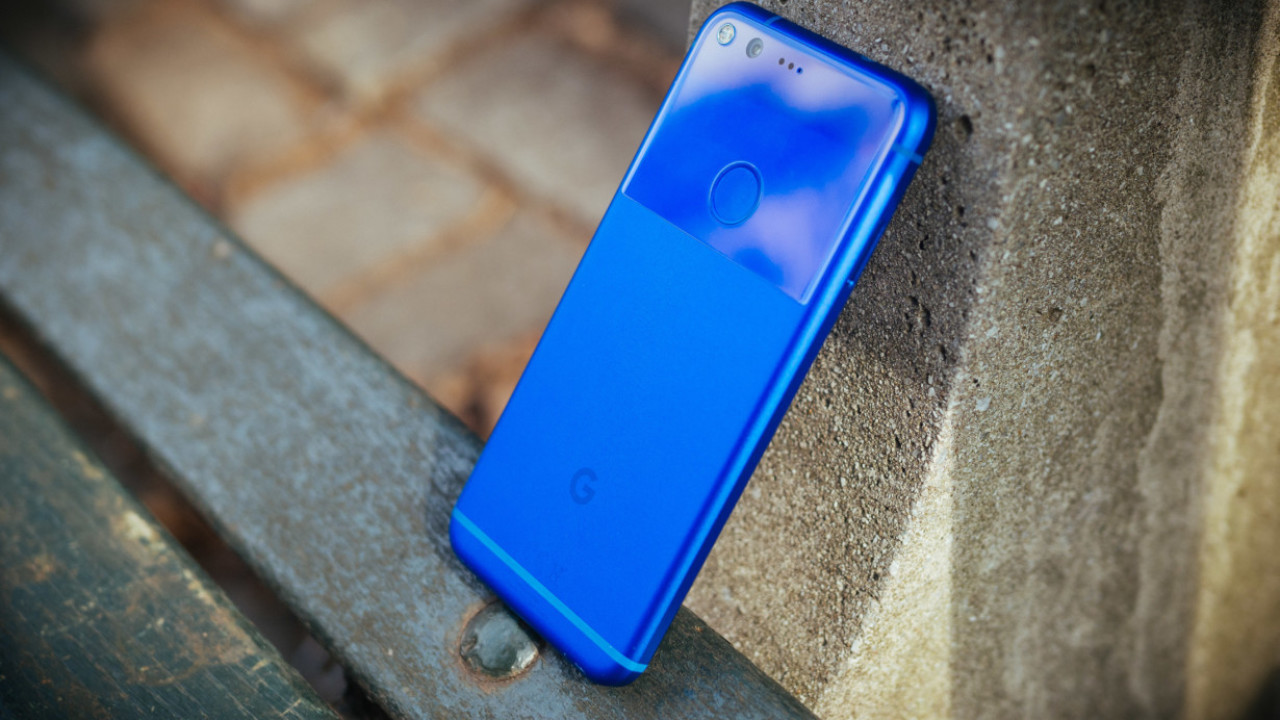 Google’s Pixel and Pixel XL launched to much acclaim in the fall. Though they weren’t that much more powerful than Android competitors, they were the first real Google phones. The promised hardware and software integration was something we hadn’t seen outside the iPhone.

Since our review is coming well after the release date passed and the hype had settled, I thought the phones might prove less impressive. I was wrong.

The Pixel’s design has been divisive ever since the first batch of leaks hit the interwebs, but I’ve grown quite fond of it. Maybe it’s the fact that my ‘Really Blue’ (provided to us by Verizon, thanks folks) model is truly so incredibly blue, but really, I just think the two-tone look stands out. It’s instantly recognizable if you’ve seen the phone before. 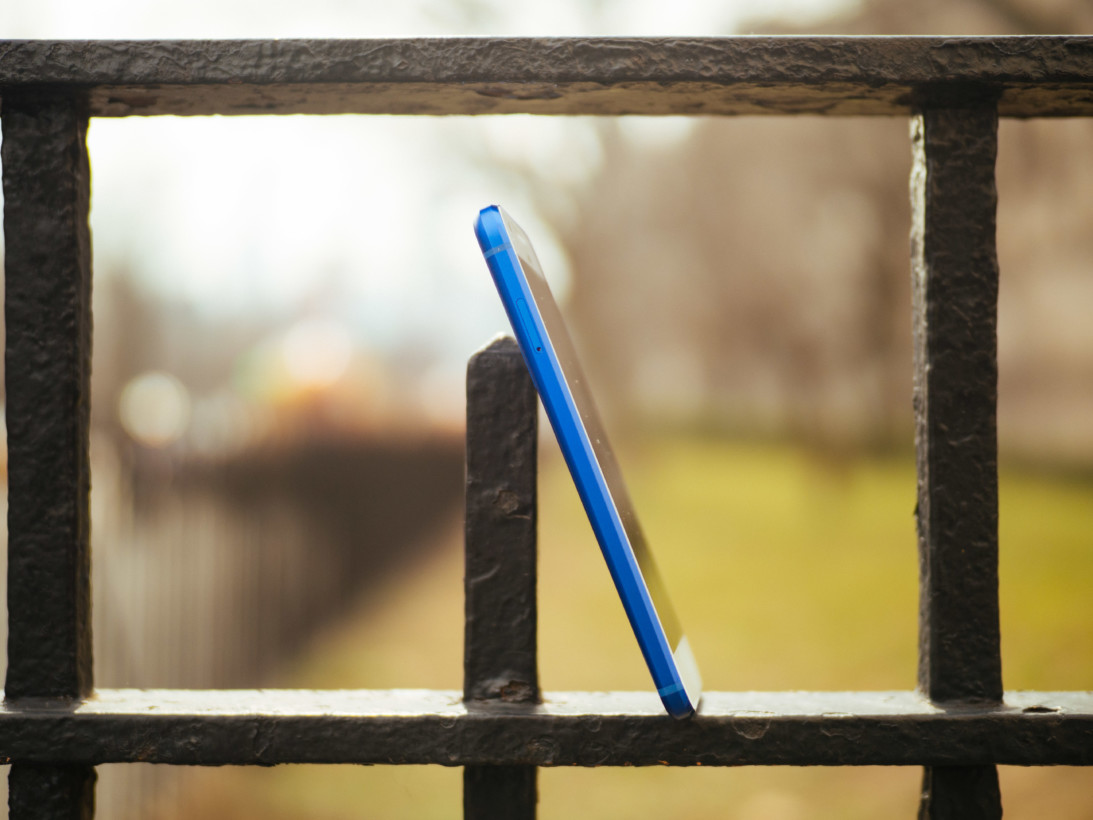 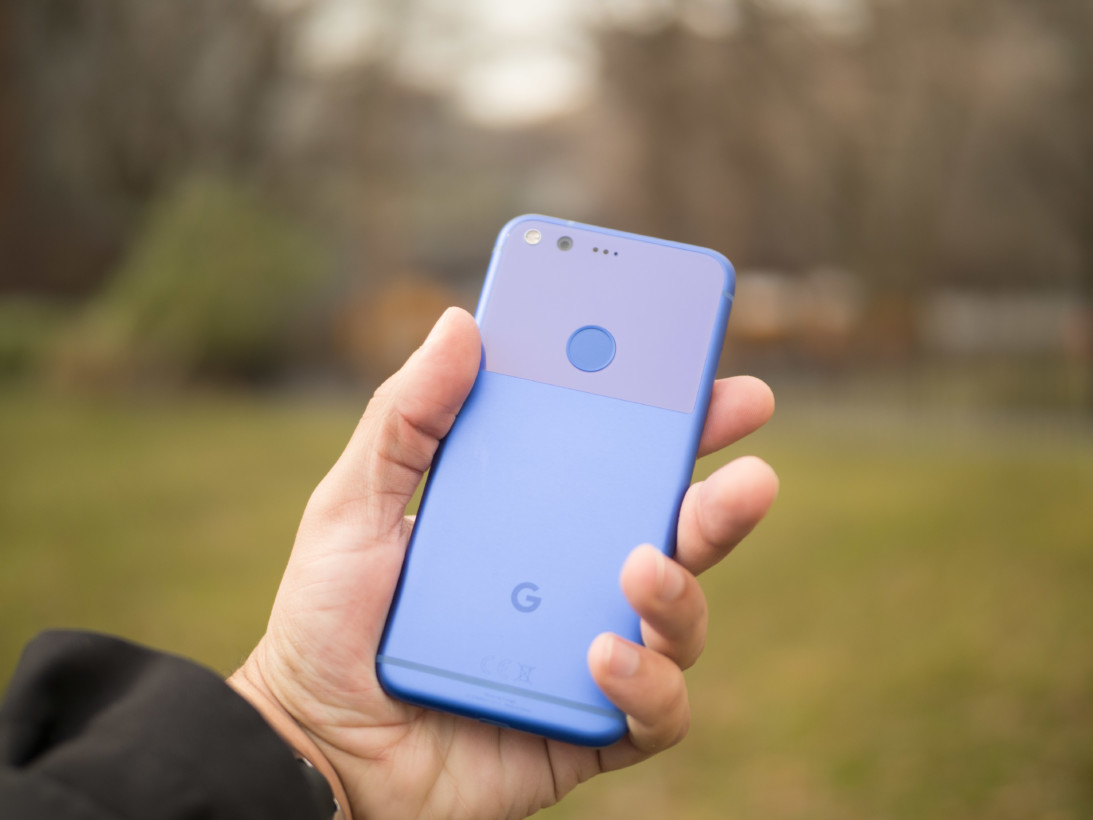 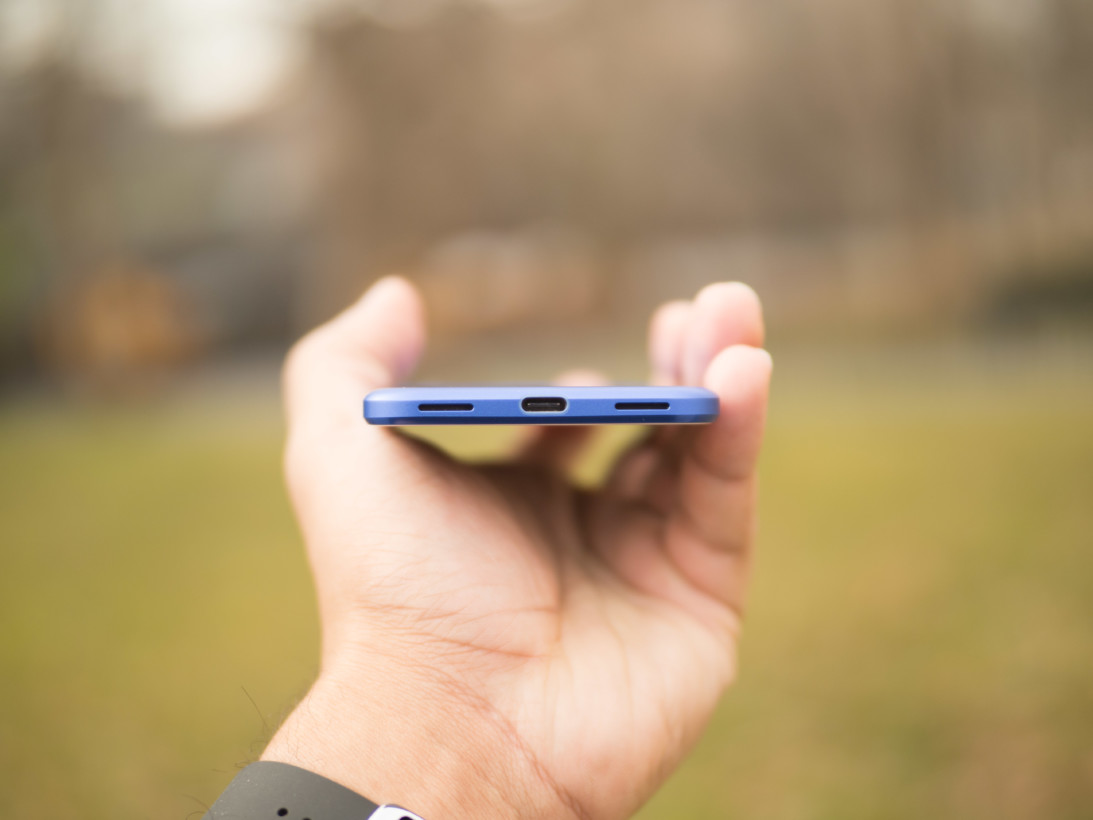 It’s hard to tell from most angles, but the phone is actually slightly wedge-shaped, tapering towards the bottom. That, combined with the rounded edges, makes it really comfortable to hold, particularly with the smaller model I tested.

The front is less interesting; you’d be forgiven for thinking it’s any other iPhone clone from this angle. But on the whole, I appreciate that Google’s design manages to be both simple and unique. And with HTC manufacturing the phone, build quality feels extremely robust, too.

The Pixel has virtually no spec bullet points to claim over competitors. You buy this phone for the software.

A few minutes navigating around the Pixel does a good job of selling it. The phone is smooth. I’ve been using my loaner for a few weeks, and I’ve loaded all sorts of apps onto it to purposefully try and slow it down, but the phone refuses.

Responsiveness might still be a hair behind an iPhone 7, but it’s awfully close to the point of diminishing returns. Among Android phones I’ve tried, the only ones that can quite compete are the OnePlus 3T (impressive, considering it costs hundreds less than the Pixel) and the Huawei Mate 9.

That also leads to pretty good battery life for a small-ish phone. I regularly achieved over 4+ hours of screen-on time with my typical heavy usage and high brightness.

Then there are Google’s personal software tweaks. The new launcher is a simple but improved version of the Google Now Launcher. Programming actions like opening the notifications shade into the fingerprint sensor is neat. And the Google Assistant – the phone’s headline feature – is handy, though its full utility has yet to be tapped.

For now, the conversational intelligence and integration with Google apps makes it, I believe, the best digital assistant around, but you still have to be someone willing to use a digital assistant in the first place. And though it’s better at understanding conversations than Alexa, the latter has many more integrations with various apps and devices at the moment (and doesn’t appear to be slowing down any time soon).

One feature that doesn’t get enough attention is the built-in support section of the Settings menu. I never actually needed to use it, but I tried it out anyway. It’s pretty nifty having isntant access to support; I suspect it will go a long way in helping less techy users work their way around the device. That the phones will be getting direct updates from Google certainly bodes well for long-term reliability.

Possibly the ‘best’ smartphone camera (if you only need one)

Google’s claims that it had crafted the best smartphone camera – backed up by the highest-ever DxOMark score – were met with some skepticism. But after having tried all the major flagships this year to varying degrees, it’s pretty clear Google is a cut above the rest.

It’s not that the camera hardware is particularly special; if anything, the lack of optical image stabilization (OIS) is a disappointment. But once again, it all boils down to Google’s software.

The default HDR+ mode – powered by Google’s machine learning – is insanely good. I used to make my living as a photographer, and I’m kind of amazed at how good the camera is at handling situations with complicated, harsh lighting. Moreover, I’m amazed at how consistent it is. 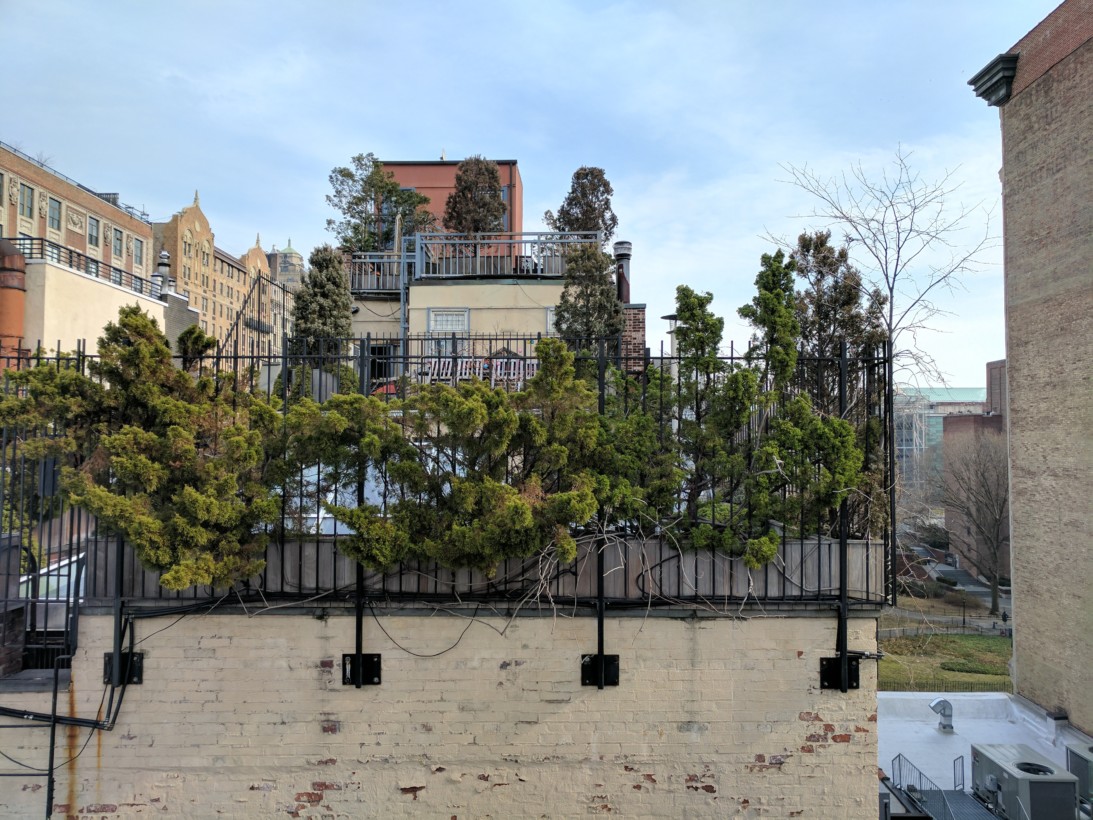 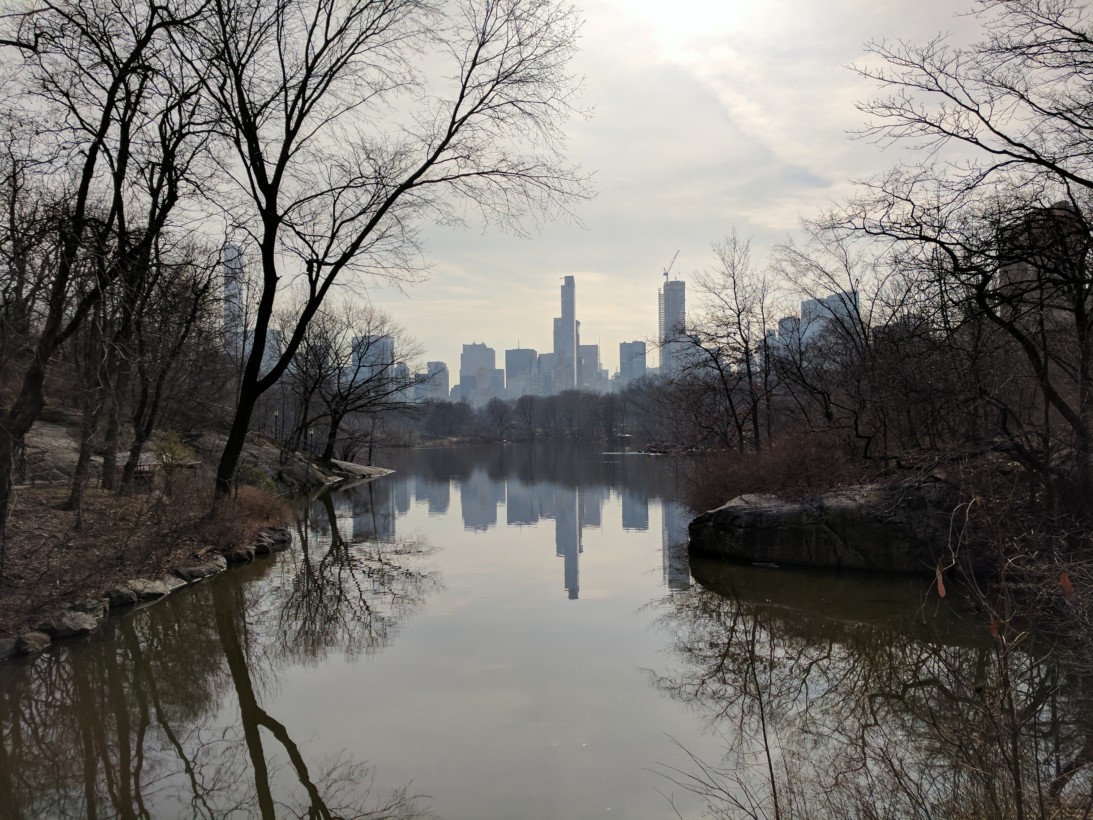 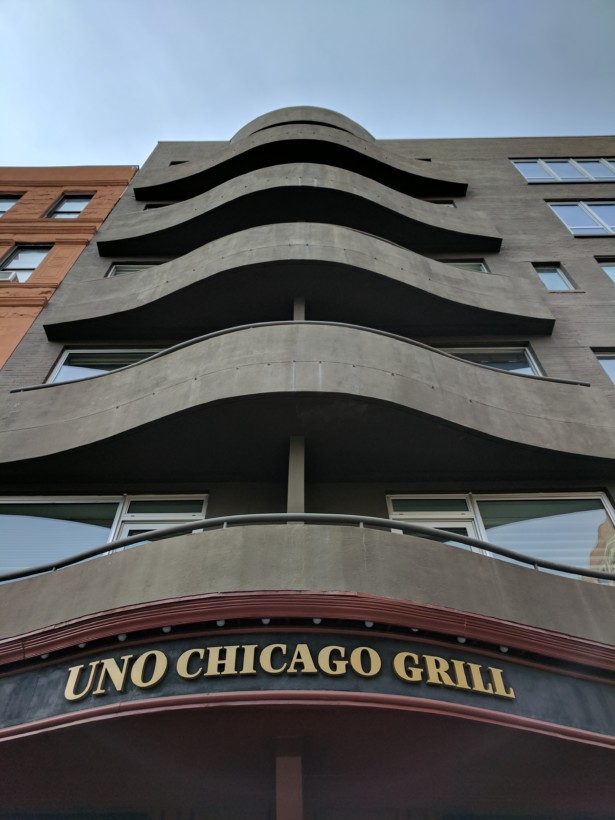 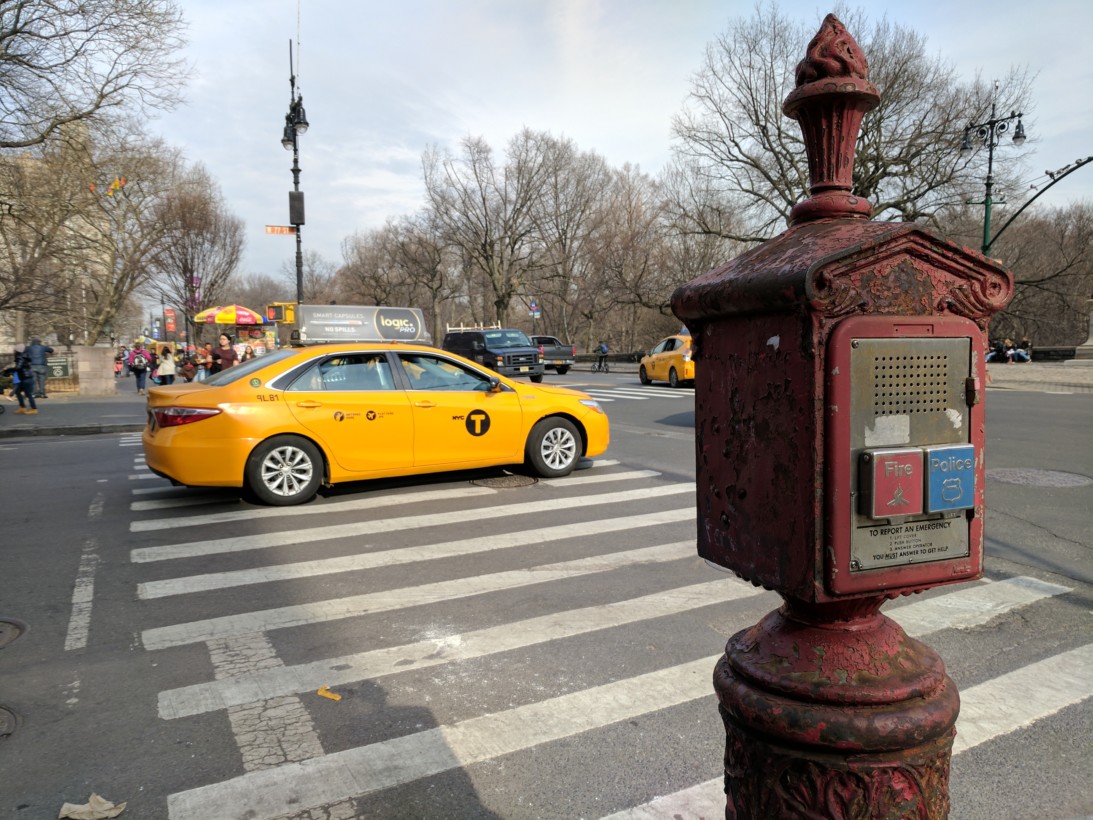 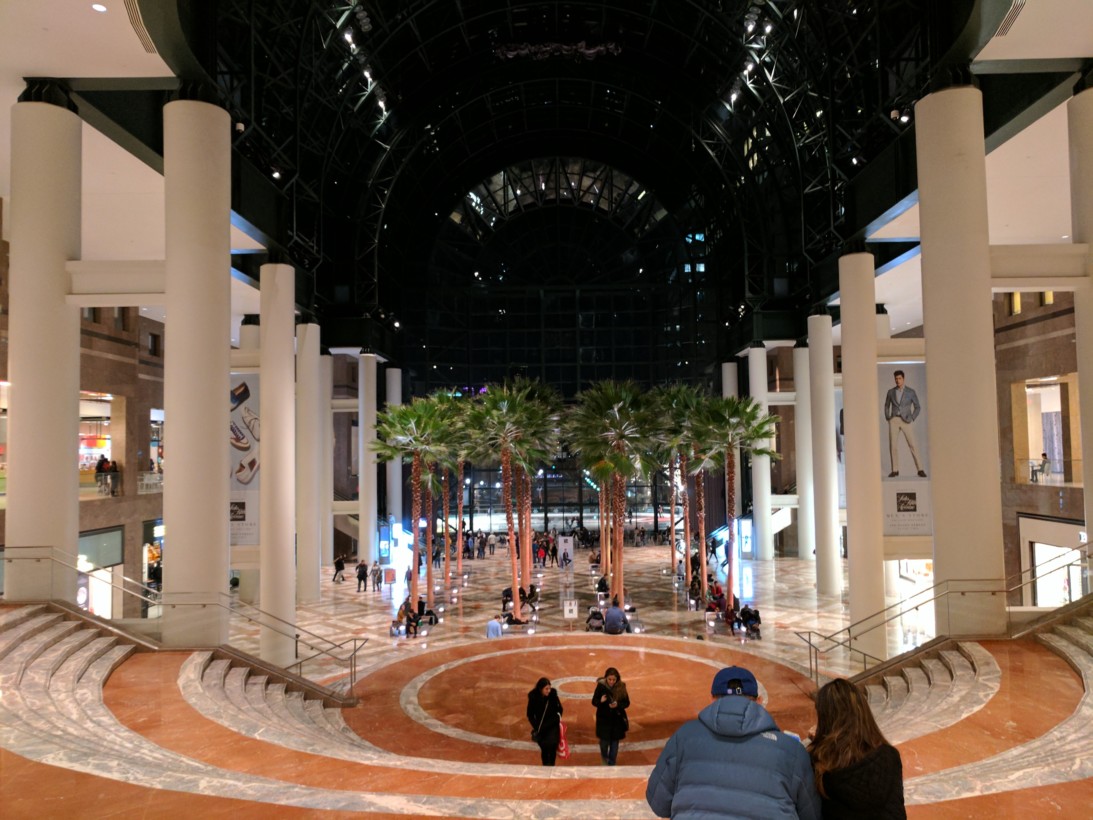 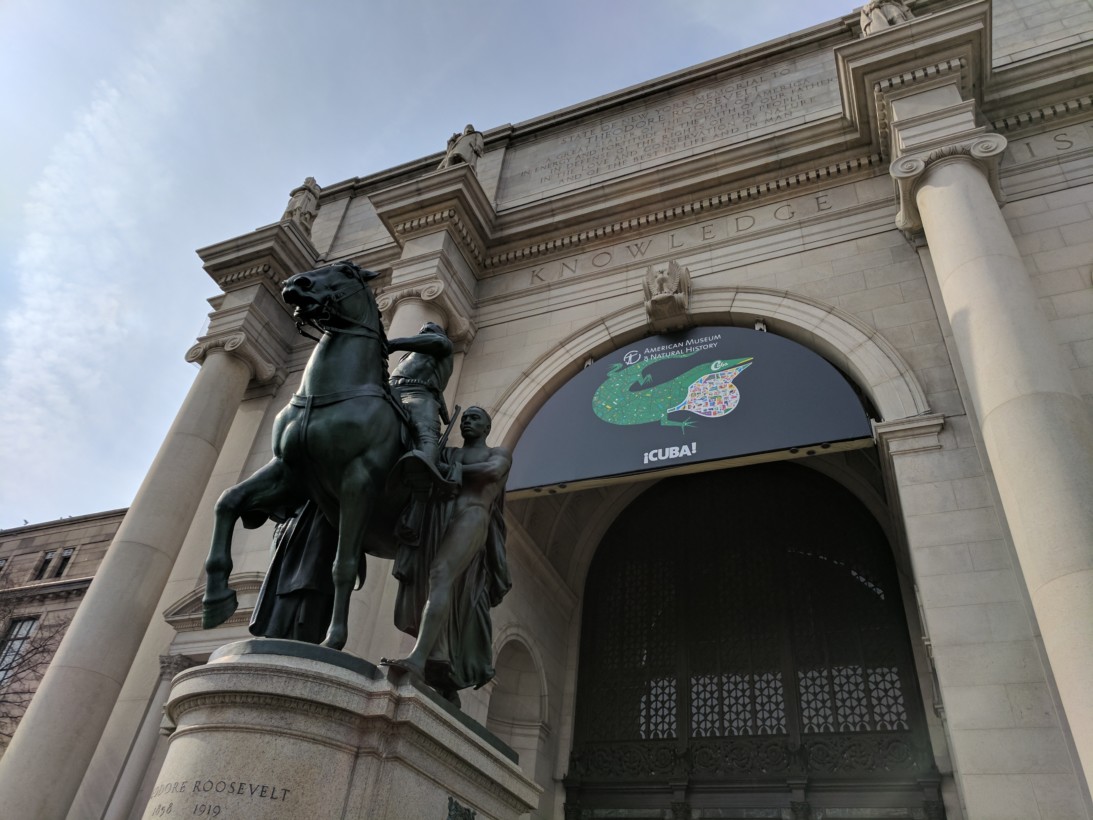 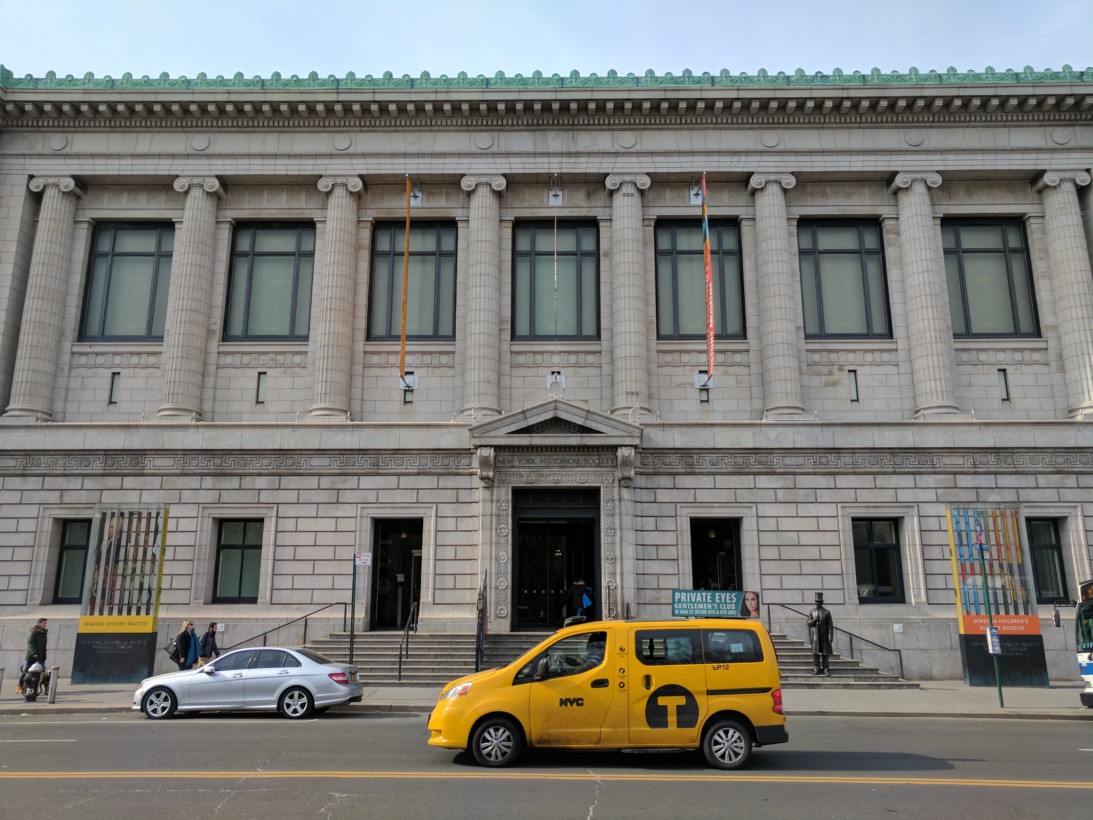 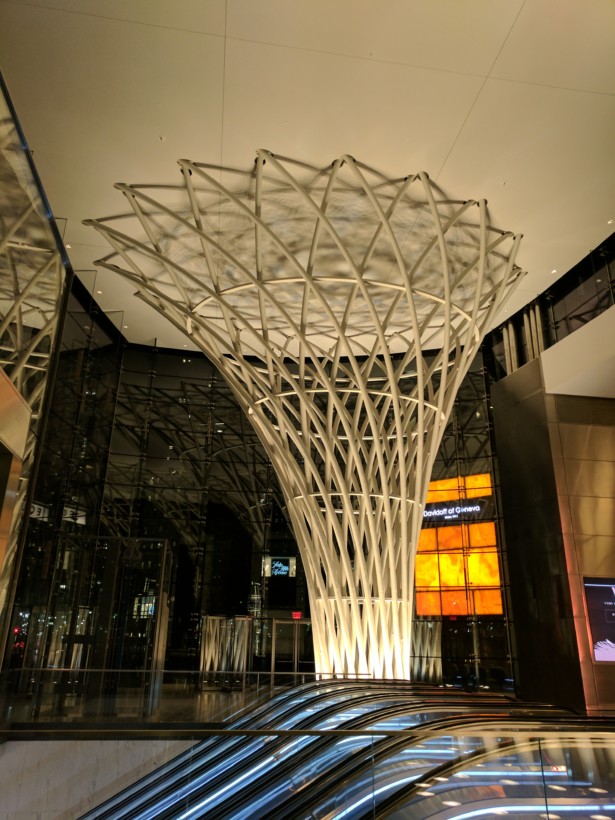 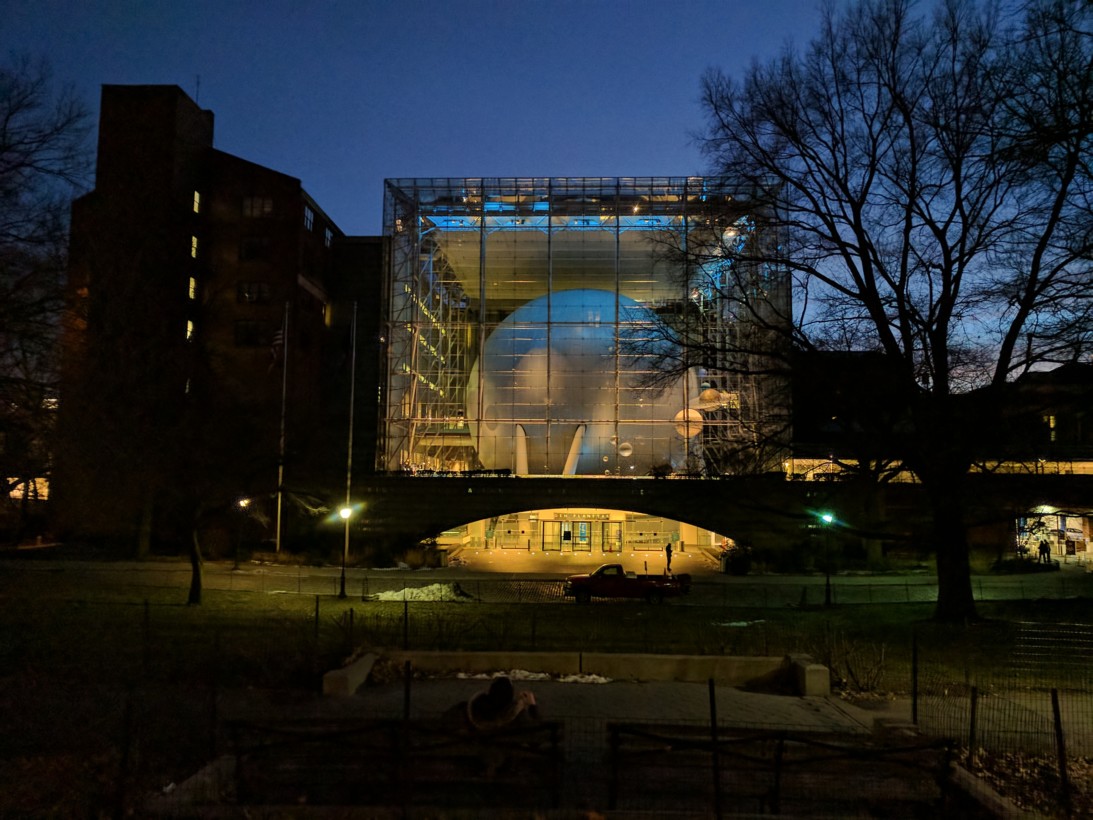 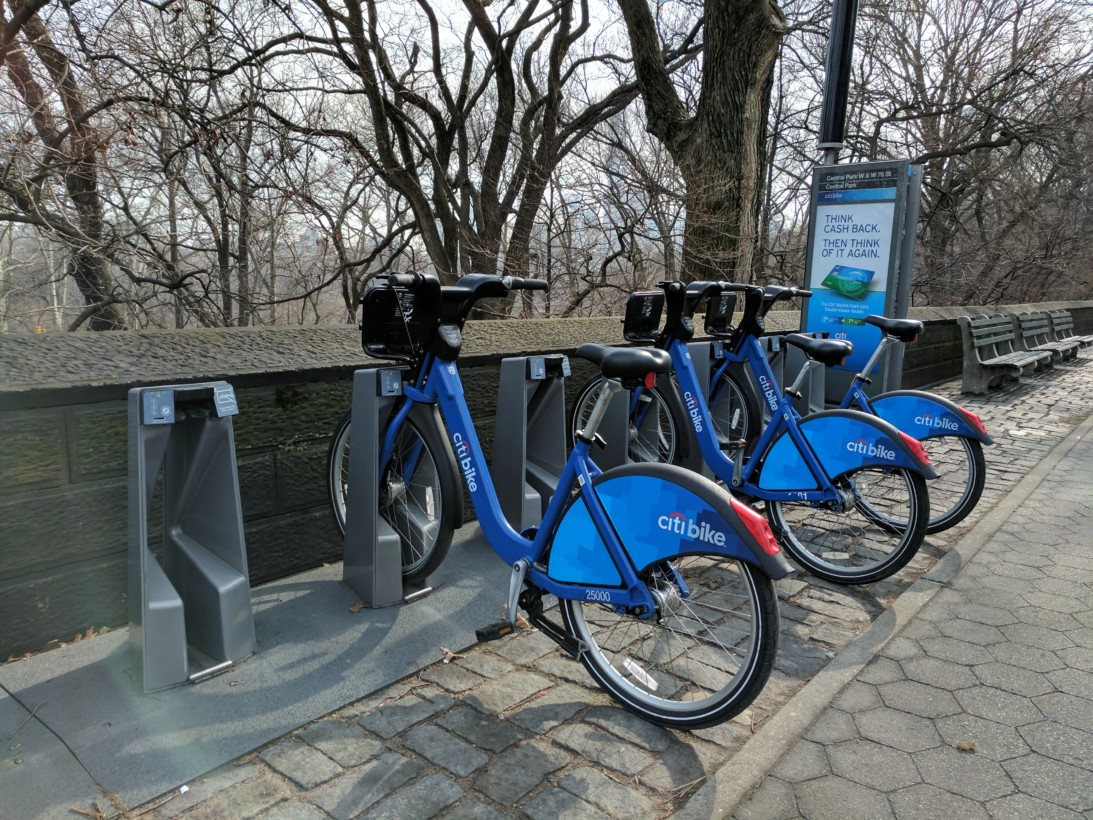 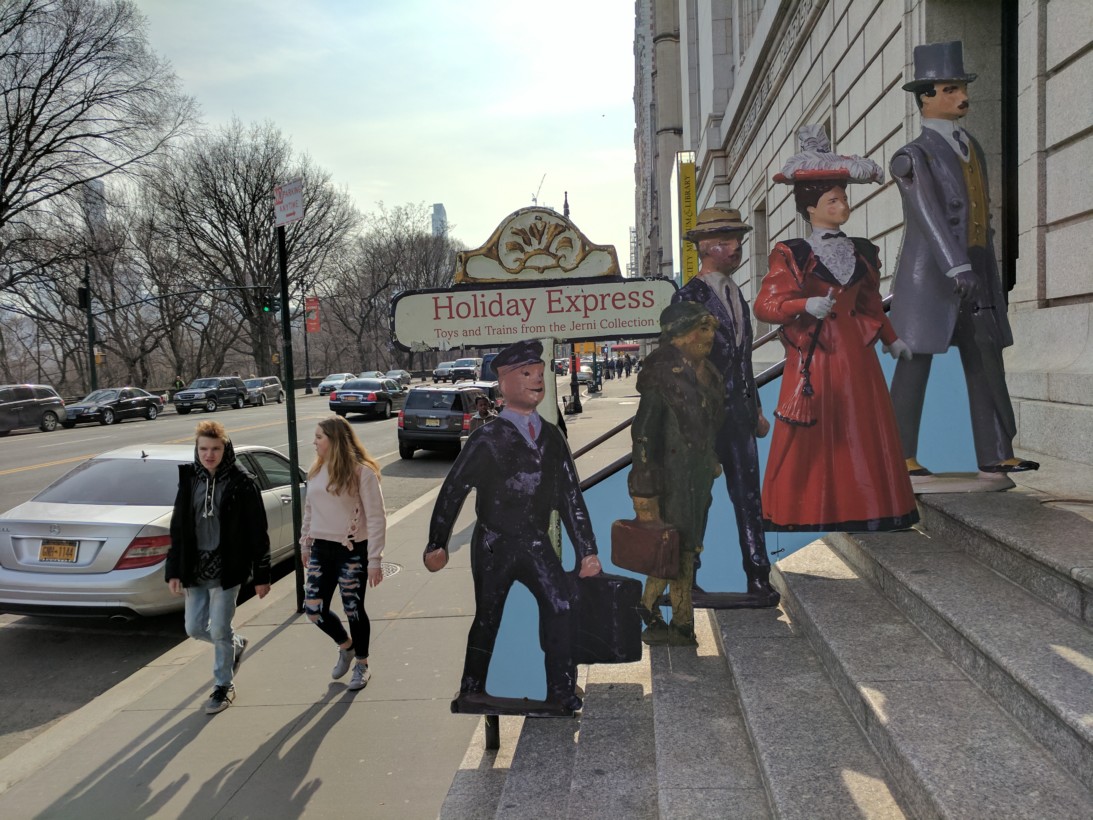 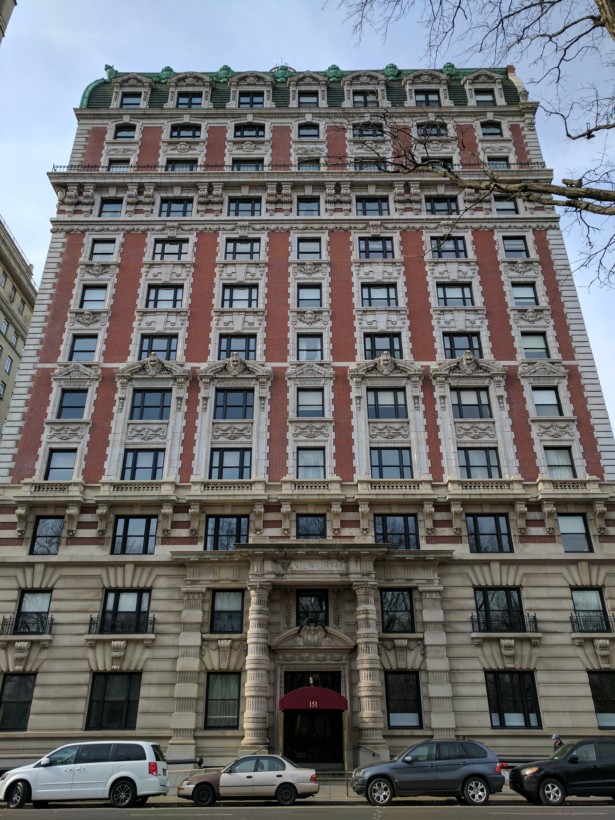 In scenes where most cameras would either blow out the sky or crush shadows, the Pixel handles them with an aplomb approaching a high-end interchangeable lens camera. Heck, it might even be better in some scenarios for plain JPEGs (it’s obviously got nothing on RAW). Colors are generally accurate and vibrant, and HDR+’s noise reduction makes it perform quite well in low light too.

That’s not to say it’s all peachy. Occasionally, the HDR kicks in so strongly that photos have a slightly artificial glow. Sometimes it gets the exposure wrong (night-time photos were often too bright). And for all the software wizardry, there’s no excuse for a phone this expensive not to have OIS at its price. It may perform in line with other flagships, but it would obviously be even better with OIS. It’s also still somewhat susceptible to shakiness.

But my biggest issue is that as great as this camera may be, most other flagships are still more than good enough, and many now provide other unique advantages. I found myself missing the LG V20’s second camera for wide angle shots, or the Mate 9’s dual setup for shallow depth-of-field (Google’s attempt at imitating lens blur sucks). The Pixel’s individual camera may be the best around, but it’s certainly not the most versatile phone for mobile photography.

The Pixel is the best ‘pure’ Android phone. It does most things quite well, and some things quite excellently.

But other than being the first phone with the big G in its name – it’s officially known as the ‘Pixel, Phone by Google’ – it’s not particularly exciting.

Other Android devices with similar specs specs offer much more on paper for similar or lower prices. With the Pixel, you don’t get a ~$400 price, dual cameras, stereo speakers, wireless charging, a microSD card slot, modules, a shatterproof screen, tiny bezels, an Iris scanner, 6 gigs of RAM, a fancy amp, an IR blaster, strong waterproofing, or anything else that particularly stands out on a spec sheet. Even its headline software features, Daydream VR and Google Assistant, are already coming to other devices.

That leaves me with a slightly bittersweet feeling. As much as I’ve enjoyed using the Pixel, there’s little about it that I don’t think Apple could match with a few software updates. I thought about buying a Pixel at launch but then realized it wasn’t a phone for me; I’m an Android user precisely because I like the extra features, even if the overall experience is a little less polished.

But then, that’s the nice thing about being on Team Android – if any of those features matter to you, you have plenty of options.

This particular phone is meant to address the one area Android ecosystem has always lagged behind Apple: a cohesive hardware and software experience that was also widely accessible. In that, Google landed a resounding success (well, except for the phone being sold out all the time).

The Pixel may not be the Android phone for everyone, but it’s the easiest to recommend. Here’s to hoping the Pixel 2 lands with a just little more pizzazz.

The Google Pixel is available starting at $649 ($769 for the XL) from Verizon, the Google Store, Project Fi, and Best Buy.